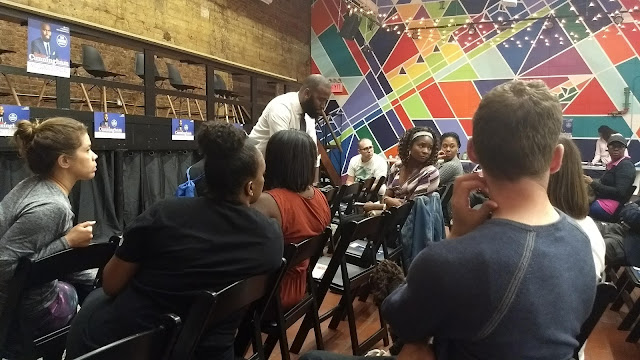 Just returned from a strategy session at the Brian Cunningham campaign - not as a curious soul or blogger this time, though I AM blogging about it. I actually want the man to win. His Field Campaign Manager was on the ball; they seem to think they have a lot of votes in the bag through months of knocking on doors. But to get to the threshold they need a ton of door-to-door person-to-person campaigning. If you want to read more about Brian head on over to his webpage. The Q doesn't want to try to convince you if you're already on Pia Raymond's team - I get it and can appreciate your opinion. However, if you're considering voting for the miserable incumbent Mathieu Eugene or the bizarrely hotheaded under-prepared recent-arrival Jen Berkley, who called me the other day in a huff to chew me out for among other things referring to her as Jennifer, which is her name on the Facebook, and for being white, which isn't really debatable. And then she wrote some nasty responses on the Facebook to reasonable questions, and it struck me that she hasn't the emotional maturity for the office. Frankly, I think we've all learned in the past six months just how important that quality is to leadership. Regardless, if you haven't made up your mind I beg you to talk to your neighbors and friends and see if they have insights.

If you're with Cunningham and wondering how to help him win, it's really pretty simple. Convince 5 or better yet 10 people you know to vote for him. That's it. If you're feeling frisky volunteer for the campaign. In particular, they'd like to see a lot of people out on election day, passing out flyers near but not too near the polls, making it clear that he really does stand a chance. Eugene will have a couple big union machines out doing the same, basically people told to do it. But with 13 endorsements and counting, Brian's showing real strength.

The Q has sounded off on the most extraordinary ineptness of your City Councilperson for nearly 8 years now. I simply don't know how to make it any plainer! If you want a neighborhood leader, and responsive city representative, a voice from the community who's respectful and thoughtful, then you're what I would call a responsible, civically engaged person.

Let's be the adults this time and put an adult into the council chambers.
Posted by Clarkson FlatBed at 9:13 PM

If you're with Cunningham and wondering how to help him win, it's really pretty simple.

It's simple. Assist a number of illegal voters to vote for him. Of course Eugene already has that base covered. A relative handful of voters will show up at the polls, and many of them will receive some kind of compensation from Eugene's team.

A person does not need to be a citizen or legal resident of the US to vote. This fact is made painfully clear by the voter registration form.

There is no penalty for lying.

Got the right endorsements. He looks good, though the total package seems a bit hipsterish.

He'll receive more votes than Jen Barkley, and probably more than Pia, but, I'll bet a dollar Eugene has it in the bag. Patronage and payoffs. He's got a big edge.

I think our district can use someone with Cunningham's energy, and enthusiasm for the job. We need some new forward thinking person in the position. Someone who not only support affordable housing, but also an advocate for the improvements of quality of life, beautifying our neighborhoods; i.e traffic calming on Flatbush avenue; street cleaning; increasing the amount of garbage cans all around the neighborhood; paving the sidewalks of the park...particularly on Flatbush, Parkside areas of our neighborhood. There's a vast difference between our side and Park Slope's side