The war is over before it began. There will be no new affordable housing on my forlorn rough and tumble block. Just more middle-of-the-road market rate housing. The poorest have been booted, legally or illegally. It's become clear to black and brown families of limited means that their money and leases are no longer good enough. No government agency has snapped into action, no developer has refused the opportunity to make real money off the neighborhood's changing fortunes.

As of today, two vacant lots are seeing signs of life. Clarkson tween Flat and Bed was always wildly eclectic. Beautiful well-kept and gardened Victorians on the south side played sentinel. 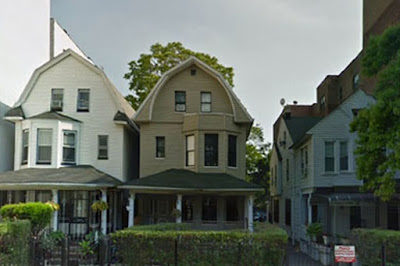 Now that the legally wrangling is through
Across the street things certainly weren't gorgeous. I often called it "the little Appalachia," with fondness of course. But there was nice group of "special" folks living on the right, mostly hanging on the porch like country living, and the house on the left was the rectory for the cinder block pentecostal church even lefter. Mount of Olives, or with sign erosion, Mount of Lives. Hell, they made out like Jesus Bandits when they sold their souls, but still the off-key singing into the wee hours lent a special charm. I hear they moved to Jersey.
It's now becoming the below.

Regarding the south side sitch:

"Marc Jacobowitz’s Bluejay Management picked up a development site in Prospect-Lefferts Gardens from Bushburg Properties for $13.5 million. In 2014, Bushberg, led by Joseph Hoffman, bought three single-family homes at 50-54 Clarkson Avenue for a total of $1.75 million and razed them to make way for a nine-story rental building. The land is currently vacant and Bluejay intends to keep the original plans, which will bring 93 residential across 65,365 square feet, as per the initial DOB plans. In 2012, Bluejay bought another stalled project in Crown Heights, a 63-unit project at 341 Eastern Parkway that was completed in 2014."


Regarding the northern incursion:


Last year, Brookland filed plans to build an eight-story building at 75-77 Clarkson Ave. The proposed tower will be two and a half blocks from Prospect Park between Flatbush and Bedford Avenues. The building will contain 46 apartments and 31,750 s/f of residential space. New York YIMBY speculated that the development will be mostly studios and one-bedrooms since the average size for apartments is 690 s/f.


As in, not family-sized units. Unless you're a family from Poodlestan.

The deal was announced by Titan Capital, which was the lender in the transaction. The firm said that the sellout for the building is expected to be around $25 million.

Brick by brick, apartment by apartment, family by family, lease by lease, tree by tree, updates intercom by updated intercom, the block becomes something new entirely. Only Irene and her twin sons Randy and Sandy will be able to claim to have witnessed the switch from mostly Jewish to black to mostly white. According R&S, neither the blacks NOR the Jews were particular happy to see THEIR Puerto Rican asses arrive.


Posted by Clarkson FlatBed at 4:44 PM

no new affordable units but still quite a few rent stabilized units in the big old rental buildings, no?

If you want affordable there are still some significant projects that could happen in the future.

I'm eyeing that enormous parking lot and the sanitation garage on Parkside between Nostrand and New York and Winthrop. Developer could ask for a variance.

New York YIMBY speculated that the development will be mostly studios and one-bedrooms since the average size for apartments is 690 s/f.

Trojan horse for the homeless?

What, if anything, is happening with the house in the same row as your's that was in danger of demolition?

Bluejay is still sitting on the lot of my beloved old Toomey's restaurant!

The small brick church pictured used to be a Chasidish Shtibel (Shul). The Rabbi lived in the frame house next door. That family also owned the first health foods/vitamin store on Flatbush between Clarkson & Lenox. BTW it was the last store on the block to get window gates.