Jesse Hamilton Gets Dirty: His GOP Buddies Seem To Have Rubbed Off On Him

Until recently the Q could have told you with a straight face that Jesse Hamilton was a strong leader. Working hard since winning his seat, he's been at every march and forum you'd expect from a State Senator. He's put forth spicy legislation. He's been responsive to his constituents and an advocate for the needs and rights of the African-American community. But something happened when he dallied with the Dark Side - i.e. the Republican leadership and Independent Democratic Caucus. He chose expedience and power over process and loyalty to the Party that elected him. One could forgive his naivete (being essentially used by the IDC leadership) because he was offered a lot in return, and he slept at night by telling himself he'd done it for the good of his district. But...

Not long ago, Jesse chose to send a nasty note from what appeared to be a new #BLM group called "Woke Brooklyn." In it the supposedly anonymous writer tried to tear NY Assemblymember Diana Richardson a new one, basically for not being black enough and putting the needs of others above her constituents - essentially a sell-out. (Tell that to Diana's face and see how THAT goes.) Ultimately Jesse was uncovered as the author (due to his own poor judgment), and the criticisms proved to be a desperate tactic from a beleaguered incumbent.

Interestingly - I got the note, and so did everyone who follows Queen Alicia through her MTOPP email list. So I says to myself, hmmm, seems Jesse and Alicia Boyd have some alliance going on here. And since Alicia is nothing if not brazenly tactical, I suspect there's something in it for AB besides warm fuzzies.

Then yesterday, I get a venomous attack note from MTOPP, targeting none other than the surging Zellnor Myrie, who's managed to rack up a stunning list of endorsements - as in just about everybody who's anybody in the Democratic Party. The nasty note from MTOPP (obviously in coordination with Hamilton, see above) knocks Myrie for comical things like "living in the Bronx" after college and "going to college" in the Bronx. (He grew up right here in Lefferts). The most potentially damaging thing that the grammatically challenged note said was that Myrie had been lying about passing the bar. Then this morning, in a rare show of almost-contrition, Boyd apologized and said (like the Fonz 40 years ago) that she was wr-r-r-r-r-r-r-ong and that her "research" had been mistaken. Fancy that. In years of error-filled missives, this is the first time she's ever uttered an apology. Perhaps a lawsuit was threatened?

Alicia raises money through MTOPP, which she says is a non-profit, though it's actually using her other non-profit New Directions In Healing as its shell, accepting tax-deductible donations. And in case you were unaware, it's illegal to electioneer using your 501c3. The fact that she's electioneering is simple fact. The fact that she uses her non-profit to raise money for MTOPP? Not a question - she's been doing it for years now: 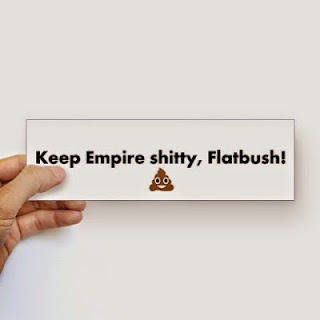 Don't forget to vote on Sept 13 for either Zellnor, or, below, feel free to stick with the Captain and Tennille. Or better yet, watch my favorite C&T video, with a winning message to boot for these troubled political times. 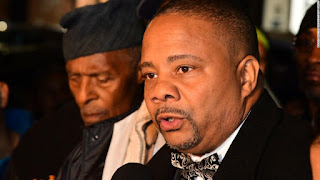 Posted by Clarkson FlatBed at 11:18 AM

Alicia proudly marched the Hamilton crew down Empire into Assemblywoman Richardson's annual block party. They were (unsurprisingly) not warmly welcomed and between Clarke's people,Richardson's people and the Myrie campaigners the Hamilton folks were quickly shown the door.

Now I am a black flag waving radical with no strong interest in the game, but as someone who deeply cares about the future of Empire Blvd, the whole scene did give me a bit of a chuckle. Hamilton clearly has poor taste in allies.

As if any of these clowns are blocking real estate development. Okay, a temporary impediment here, a temporary impediment there. But nothing more than altering the flow of a raging river as the water rushes past a few rocks. Meanwhile, the local Democrats now seem like Shiites vs Sunnis. All in all, more tempests in more teapots.

MTOPP has made real estate development in our neighborhood a MORE destructive force, not less. I threatened Alicia using the CAN-SPAM act after I received the Hamilton email because I've unsubscribed from her list at least a half dozen times.

I'd love to see her fraudulent fundraising exposed. Speaking of, when, exactly, is Hamilton going to return his Independence Party donations, as mandated by a judge? He missed the deadline already (all "former" IDC members missed it).

I'd love to see her fraudulent fundraising exposed.