The Parkside Prize Goes For the Gold

In case you hadn't been paying attention to the Q's endless braying, here's the backstory: a diverse collective of neighbors calling themselves The Parkside Project have been clocking countless hours to try to turn the stretch of avenue from the Park to Flatbush into something more than an eyesore to be endured. Springing from the metaphorical loins of local author Rudy Delson, the idea to hold a contest to redesign the block resulted in an inspired winning proposal from local architects who, serendipitously and unbeknownst to the jurors, happen to live and work here in the area. In Cho of ChoShields Studio created a plan for the subway station plaza that is particularly sweet: 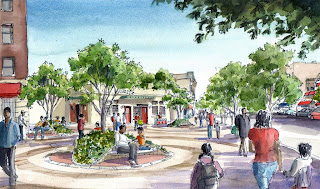 The folks at the Parkside Prize, in a bid to turn fantasy to reality, applied for funding from NYC's Department of Transportation's Public Plaza program. You've probably noticed plazas sprouting up all over town, so why not here? The Q received permission from the good folks at PLGNA to reprint some of the application's key narrative points here. (PLGNA is the official author of the proposal, since the Parkside Project is acting as a committee of PLGNA in order to leverage PLGNA's non-profit status and history of good works in the neighborhood). I urge you to read the app and comment away. This really is a plan for the people, so if you happen to be a people, let your voice be heard. Excerpts below:


...Parkside Avenue itself is predominantly commercial. The street is anchored by four large merchants (McDonalds, Duane Reade, Popeye's and Pioneer Supermarket), with a variety of hardy small businesses in between: take-out restaurants, dry cleaners, bodegas, 99-cent stores. And these businesses need to be hardy, because this is a terribly neglected block:
Much of Brooklyn enjoys a renaissance; Parkside stagnates. This dispiriting block is the gauntlet that many thousands of Brooklynites must walk at the end of their commutes home at night. Parkside Avenue has been neglected by many city agencies for many decades, and cries out for attention.

The Parkside Project Committee of PLGNA was formed in the spring of 2011. It works to improve conditions on Parkside Avenue between Ocean Avenue and Flatbush Avenue. In 2011 and 2012, the Committee organized and ran a design competition, with $1000 in prizes, inviting architects and designers to imagine a new Parkside Avenue. The competition received wide publicity; the conceptual drawings submitted with this Public Plaza Grant application are the drawings that won the grand prize. The northeast corner of Parkside and Ocean Avenues is a quarter-acre triangle of concrete. There is nothing on this barren triangle: not one tree, not one bench. Year in and year out, commuters hurry across this plaza, eager to be anywhere else. This barren triangle is the entrance to our neighborhood. (This site is also an entrance to Prospect Park. Residents of Park Slope or Windsor Terrance can enter the park by any of several dozen quiet and leafy streets; residents of Flatbush can only enter by way of the concrete at Parkside. With the refurbishing of the Wollman Rink and the Music Island by the Prospect Park Alliance, many thousands of New Yorkers will visit our corner of Prospect Park for the first time. They, too, will enter by way of the concrete at Parkside.) We believe this quarter acre could be better utilized for two reasons. First, because on a day-to-day basis, the commuters and shoppers and children who live on and around Parkside need something more than barren concrete as the gateway to their neighborhood. Second, because Prospect Park, the jewel of Brooklyn, needs an entrance that extends its canopy and its open spaces into the surrounding streets. Instead of devoting a quarter acre in the heart of Brooklyn to barren concrete, we hope DOT will help us fill the space with trees, water, paving stones—and people.

In the last year, DOT has begun to take steps to improve the safety of the pedestrian crossings at Parkside and Ocean; we hope that DOT will see the advantages of addressing the other half of the problem, the underutilized triangle of concrete at Parkside. (We understand that DOT, in awarding Public Plaza Grants, takes into consideration the proximity of open space to the proposed site. Please see Note 3.) The Parkside Project Committee of PLGNA is devoted to bringing civic improvements to Parkside Avenue. As discussed below, in 2011 PLGNA held a design competition for Parkside Avenue; the winning entry featured the construction of a plaza at Ocean and Parkside. We have attached, as a .pdf file, a design board explaining the winning entry. We have also attached, as .jpgs, photographs of the intersection as it exists today. We think the visual contrast between what could be built at Parkside, and what exists today, says it all.

At present, the triangle at Parkside plays host to a weekly fair in the summer, the Arts & Culture Fest, organized by a 501(c)(3) called The Creative Side. We are friendly with the organizers of the Fest (they have submitted a letter of support for this application), and PLGNA would look to The Creative Side in developing programming in a newly built plaza. This programming would continue to include a weekly fair, with occasional musical performances. We have also discussed the possibility of expanding activities in the plaza to two days a week, with the Fest on Saturdays and a farmer's market on Sundays.

In the spring of 2011, a group of neighbors began meeting in a local coffee house with the aim of building community support for civic improvements to our poor Parkside Avenue: this was the birth of PLGNA's Parkside Project Committee. The original concept was simple. PLGNA would hold a design competition, open both to design professionals and to the general public, to solicit ideas for a new Parkside. State Senator Eric Adams, an early supporter, contributed $1000 toward the prize money. The Parkside Project Committee has a team of about one dozen consistent and energetic volunteers, and since those early meetings in 2011, they have repeatedly been in contact with the many merchants onParkside and with all of the local elected officials. (We believe this broad outreach is reflected by our many letters of support.) PLGNA announced the prize late in the summer of 2011, to wide publicity. Thousands of leaflets were distributed on the sidewalk in front of the Parkside subway station; hundreds of posters were hung in local businesses; nearly a dozen local colleges and universities were contacted; and PLGNA volunteers were interviewed in the local press and by local TV news. In the end, more than a dozen proposals were submitted by amateurs and professionals from across New York City.

In the winter of 2012, PLGNA convened a jury to select a winner. (If PLGNA were to create a Community Advisory Committee regarding a public plaza, it would begin by re-contacting these jurors.) The jurors consisted of four merchants who own businesses on or near Parkside Avenue, representatives from local block associations, an arts group called PLG Arts, and a landscape designer from the Prospect Park Alliance, as well as City Councilman Mathieu Eugene and State Senator Eric Adams. The winning design was submitted by Cho/Shields Studio. A .pdf of their winning design is included with this application. More entries can be seen at the prize website: www.theparksideprize.org. In March of 2012, PLGNA hosted a neighborhood party to show off the design and award the prizes. Again, posters were hung, leaflets were distributed, and all the local blogs advertised the night. Hundreds of neighbors attended the party; the delight and excitement that was expressed was incredibly moving. Later that month, the winning entry was presented to both CB9 and to CB14, where it was received with great enthusiasm. What we have here is a neighborhood in unanimity: Something new is needed. We very much hope that DOT will agree; we are eager to work with DOT to build a better Parkside.

About PLGNA - the Sponsoring Organization Submitting the Grant Proposal

PLGNA was formed in 1969 by residents of Prospect Lefferts Gardens who opposed unfair real estate and bank practices like redlining and wanted to form a working interracial neighborhood. One of its first projects was to document 300 abandoned and 300 deteriorating buildings within the neighborhood. In 1973, PLGNA became involved in a landmark legal battle to combat redlining. Over the years, it has helped tenants to organize unions and blocks to form associations; supported safety programs; transported seniors; developed youth programs; and served as an umbrella organization for other neighborhood groups, including many local block associations.

Posted by Clarkson FlatBed at 11:18 PM

I think this looks great. Thanks for the hard work of everyone that worked on this - let us know if there's anything you need help with to move it forward.

This may be beyond the scope of the plaza itself, but the road surface on this block is a death trap for cyclists, especially on Parkside right before Flatbush. Is repaving the road a possibility in the larger scheme of things?