Another weekday night, another community meeting, another evening the Q goes home shaking his head. What was accomplished? Was any new light shed? Were decisions made? Were new ideas shared, and minds changed? Did the lighting get any better in the Pentecostal church on Woodruff between Flatbush and Ocean? And that band that plays there, even while we meet, can groove pretty hard at times, but don't they keep people in the neighborhood awake when they play too late? And do heavy-set cops just sweat their buns off along with the Hasidic Jews all summer long? I sweat buckets in shorts and thongs from June to September, reducing my overall manliness quotient to absolute zero. Maybe you get used to it, the head-to-toe thick dark colored clothing in 90+ degree heat? 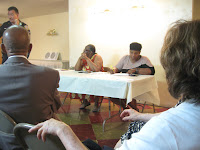 At the table at left is Annie Williams, longtime (former) president of the Woodruff Block Association, and at right, Evria Ince who is her protege and the current prez. If you live in this neighborhood, I highly encourage you to get involved with the block ass. Evria's email for the group is woodruffaba@yahoo.com. It may be hard to get a quick response from her, but keep at it! 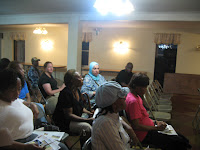 Ask her to add you to their email list, because their signs go up for meetings at the very last minute, leading I believe to poor turnouts like the one on Wednesday. Folks, you had a chance at this one to sit in a small room with your councilman (Eugene), assemblywoman (Rhoda Jacobs), cops from the 70th precinct, and president of the 70th precinct community council Ed Powell, who is running for district leader at the youthful age of 71, though I can't for the life of me understand why after all his years of wisdom and experience he isn't grooming someone to be his replacement rather than start his elected political career now. No offense, Ed, but do you really need this gig? It doesn't even come with a salary! I'll vote for you, man, but where's the next generation coming from? Hang on to the 70th precinct gig if you must, but don't hog the spotlight. Maybe Evria will run next time? Or Elizabeth C?

Look, the whole thing was very well-meaning and all, but I got seriously peeved when I asked about what sort of response we could expect to constant drug dealing and intimidation happening on Woodruff near Flatbush. Many of my neighbors have complained about the gang hangs and selling happening there (not the chess playing, btw, which generally isn't bothering anyone, except when it turns into a drunken brawl), and I've seen transactions myself with my own eyes on numerous occasions (note to dealers, don't you think I might be a cop? I mean, I'm heavy-set and all...). Jacobs, Ince and Powell basically turned around and insinuated I needed to get more involved, which is preposterous since I spend every available non-work non-family hour of my week on this kind of stuff. Powell went as far as to suggest that I bring it up at a 70th Precinct Council meeting, which is ABSOLUTELY RIDICULOUS since the president of the damn thing is...HIM! I'm bringing it up here because you supposedly came here to listen to our concerns and tell us what you're doing about them. Then I got another earful of that "it used to be SO much worse here, you're SO lucky we cleaned it up for you" bull-crap. I mean, if you feel your job is done here, then MOVE ON so someone else can recognize that there's actual work to be done and not rest on their laurels. Sorry, but that response might work with folks here 25 years and more, but I've been here a decade and I can tell you with certainty that we're backsliding in some quadrants.

A question came asking Rhoda why, if she was busy trumpeting the success of getting dozens of security cameras in Boro Park, was there zero talk of getting some for our nabe. She has a tendency to get feisty and defensive when you ask anything but softball questions, and predictably she blamed the whole problem on Dov Hifkind, he of the Republican persuasion, who has special access to funds for voting with the GOP on other issues, so politically he's well positioned to get perks like that. With the recent stabbing of a teen in the Parade Grounds, one would think that more cameras or better cameras or monitoring or police presence would at least be worth talking about. But with the help of Evria, the conversation was shut down almost as quick as it started in the name of civility, I guess. But if we can't have heated discussions in a political meeting of empowered leaders and their constituents, where CAN we have these conversations? Needless to say, I was disappointed by the lack of dialogue. For his part, Mathieu Eugene gave his usual stump speech about working together, and he took credit for the new Parkside Playground and money for Kings County hospital and the intersection at Parkside/Ocean, which is admirably better but still totally unmanageable at rush hour.

Okay now, Q. Pick up your hands, and put away the keyboard...it was a nice meeting generally, and everyone stuck around to talk after. With an average age of 55 in the room, I can't help asking - where are all of you younger folk? Reading this crappy blog isn't the same as raising your voice publicly and taking ownership of your neighborhood. Because as we've learned throughout the City it's up to us to raise the issues and hold feet to fire. Actually, that phrase is kinda ghastly, so maybe I'll just say "raise issues and remain vigilant."

Posted by Clarkson FlatBed at 10:27 AM

Being that I wasn't sure whether Mr. Q at Parkside would make the meeting, I actually took notes. I've really tried to commit to going to block association meetings, but I have to say after two hours of hearing almost nothing of any use whatsoever, I'm seriously rethinking it. I like Evria a lot, and I respect her pretty seriously for even wanting to take on the responsibility..but there is very little effort made to draw in anyone new. Everything in Woodruff, and indeed Flatbush, is super entrenched. Also, FYI: Josue Pierre is running for district leader of the 42nd, so there is an alternative to Mr Powell. And quite a good one, in my opinion. I'd be happy to put up my notes if there is any interest.

Hmm, well if I didn't have to work evenings I would have been there. However, that would have required knowing about the meeting. I mean where on earth do they even put the signs? I went to the meeting regarding traffic calming on Ocean and Parkside, as was kind of put off. I didn't really care for Eugene and his constant interruptions of the representative from the DOT just so he could thank everyone of note for being there. I guess that's just typical political stuff, but super annoying if you're trying to find out the on goings for your nabe.

Also, I too get sick of "oh it was so much worse back then blabblabblab" stuff. Okay, so does that mean we should live with the status quo? Uh, no.

it's worth it getting on the block association mailing list. You get a few days notice-- sometimes a week. The notices go up the day before and only on a few buildings if they do go up at all.

Since the group is the "Woodrough Ave. Block Association", would they want to include individuals who, let's say, live on Parkside Ave, or Crooke Ave, etc?

Also, since it seems the higher ups at the meeting didn't find Q's issues worth talking about, what did they feel was important to spend time talking about?

ElizabethC, if Q wouldn't mind, I would also love to read your notes.

I don't live on this block but in general I don't attend neighborhood meetings because I really can't stand the whole pathetic, lazy excuse approach to addressing everything, saying it's better now so don't keep trying to make it even better. And you do hear that at every meeting or precinct meeting. So what, were humans supposed to stop with the invention of the wheel and never invent the motor to make the wheels turn? Throw up our hands when the phone was invented and never invent the internet?