In an open letter to Tish James a few years back, the Q waded into controversial local politics for perhaps the first time, and certainly the first time since being given a seat on the Community Board, which I've recently learned can be snapped away on a whim - bye-bye our wonderful Transportation Committee chair, for instance, who was not re-appointed. Sigh. So what was the Q's beef to Tish?

Basically I was confused why she and other community leaders came out against the Quad project, and why they would consider parking and moderate traffic flow on Crown Street more important than creating an actual permanent campus for a college that has carved a niche providing higher education to Brooklyn's most needy, yet most motivated, young people. AND tons of adult learners. No brainer, right? More green, less exhaust on campus, more interaction between students and faculty, more community events. All there was to it was to close down one block of one lowly street. And the street as is (Crown, Bedford to Franklin) could currently be named after Bud Ugglie. It draws some morning communter traffic, but it's hardly a main artery for Central Brooklyn. So why all the vitriol coming from the community against such common sense public space?

My suspicions were confirmed as my understanding grew. Folks on Montgomery and Crown between Bedford and Rogers, gorgeous blocks for sure, have felt kicked around and disrespected by Medgar for years, ever since it took root in 1970. Longtime commercial buildings were razed to make way for the college. The college wasn't always friendly and accommodating to community needs, and communication was non-existent. The college even renamed a block after itself. Then, when an unpopular college president announced the $15 million project, tempers exploded. Twas gonna look like this: 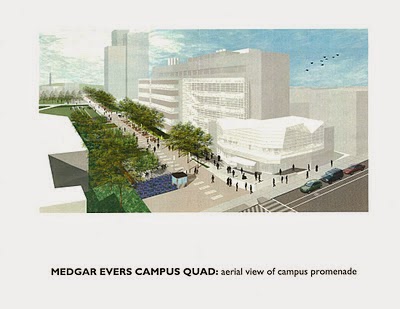 And so, behind closed doors, a compromise was apparently reached. And while the street will apparently not be shut down entirely, I hardly see how the slight difference was worth all the fuss. Looking at the drawing as a layperson, I'd say that eventually the street WILL be closed to traffic. With all the planned pedestrian activity, it seems foolish to try to keep cars moving through the Quad.

You may wonder why the Q would concern himself with stuff happening north of Empire. As a bike rider and CB9 guy, I've come to very much view this area as part of my neighborhood. And if the redevelopment of Empire Blvd comes to fruition, and the re-purposing of the Bedford-Union Armory happens, and new bars and restaurants take root along Franklin, Bedford, Rogers and Nostrand below Eastern Parkway, I suspect the distinctions between Crown Heights South and Lefferts Gardens will be less severe. It's Empire Blvd's current junky vibe that cuts the two in half, and Eric Adams et al would love to see it turned into a tourist and shopping and residential high-rise zone. With hotels. More on that as the rezoning process continues...


Posted by Clarkson FlatBed at 7:04 AM

Actually shared streets (where pedestrians and bicyclists mix with cars and where the street design (pavers, narrow width) slows down traffic is the gaining ground around the U.S. and Europe (slow to come to NYC but these things often are). So glad to see Medgar Evers take it on. There are lots of places where too much space has been given to prioritizing cars over people. It's time to rebalance that equation.