Power to the People

Man-o-Manischewitz, it is truly a beautiful thing to watch so many concerned neighbors snap into action over the "refugee crisis" at 60 Clarkson Ave. Over a holiday weekend, the Q's inbox was filled with offers of support. And in the case of Esteban from the Crown Heights Tenants Union, some real action flew into action. Below is the flyer he posted yesterday at the building. 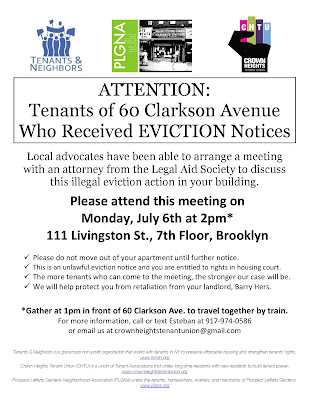 Your correspondent plans to be at 111 Livingston to hear what can be done - a lawsuit against the City for a system that drags people along the bottom? Basically, the letters from "We Cares," landlord Barry Hers' bullshit social services company that manages the homeless families in his very own neo-slum buildings, scared many residents into moving immediately to other Hers buildings, leaving even personal belongings behind. That's what the system does to you - makes you think you have no rights whatsoever, when in fact, Hers had no business vacating the business thusly, ASAPly. If in fact We Cares, WE give our families time to get their crap together, and we move them to someplace that's not teeming with roaches, peeling paint and rat shit everywhere. Because WE are being given a boatload of money to treat these folks, many of the moms AND children being victims of abuse (does a child of 4 who was raped mean anything to ANYone?) with a bit of gentle decency why they get their lives back together.

And to the cynical among you, I'd remind you that WE FOOT THE BILL for this kind of craven disdain for our fellow humans. Yes, DHS and the City are failing these people. And not because of lack of funds for the landlords. MAYBE it's for lack of funds for oversight, but for chrisakes find people who can oversee this program of scattersite housing for the homeless. I hear nothing good about DHS or its ability to run its systems. Folks, the homeless population is huge and rising. Maybe it'll be 100,000 by the end of the decade, or sooner. But that's still just ONE PERCENT of the population.

We can do better for this bottom rung. We can do better for the working poor. We can do better for the hard-working immigrants, and single moms, and displaced families, and those seeking shelter that they're willing to pay for if they can just find a place that's not $2500 a month. Christ, even if you're working full time at FIFTEEN DOLLARS AN HOUR, more than minimum, you make like $30K. They are our neighbors, our citizens, our service providers, and yes, in many cases, people unable to work and in need of subsidized food and shelter. An increase of $100 a month in rent can put these families out on the street.

Is that a problem? That human beings can't always survive on their own in a cut-throat capitalist system, wherein millions make millions off the consuming of hundreds of millions? Do we care that the next generation of poor become the NEXT generation's problem to deal with? Or do we figure out a better way to alleviate suffering at the bottom of the economic food chain and give people the proper help and motivation to provide for their own families?

There are always going to be poor people. It's a natural fact. How we deal with the poor says everything about who we are as a race. The HUMAN race. And if saying that makes me a bleeding heart liberal, then get me a mop to clean up the mess coming out of my chest.
Posted by Clarkson FlatBed at 10:20 AM

Hey isn't our former Assemblyman in charge of groups like We Care now?

[stands up and cheers]