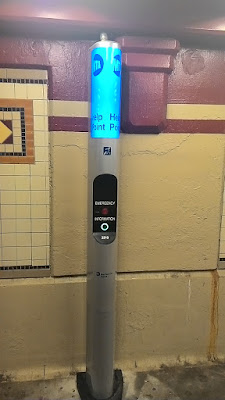 I thought maybe these things were gonna be super space-age tricked-out with all sorts of digi-doodles. Turns out the blue florescent light is the only cool thing about them, and once these dorky pylons get even a wee bit vandalized they'll likely become the ugliest part of your daily commute.

So how do they work? I wondered, so I pushed the mysteriously uninteresting button marked "information." Know what happened? A scratchy speaker-phone auto-call got made to a disinterested receptionist, probably from the 311 pool. So I made up a simple request. "How do I get to Coney Island from here?" Now granted, I was standing on the downtown platform at The Q at Parkside station (natch) and knew damn well if I hopped on the next train I'd be on my way. I'm not kidding now, I was put on hold twice, while the attendant tried to figure it out for me.

That the MTA spent more than a single Harriet Tubman on these things is outrageous. 99 out of 100 people these days have cell phones. What in God's name are these oversized light sabers supposed to do that a cell phone can't? And in the rare occurrence you don't have one on you, or the battery is dead, you can ask someone to make a call for you. Or for advice on how to, I dunno, stand clear of the closing doors or some-such. And with the money they spent on these glow-tubes they could have bought everyone in NYC a new phone anyway.

Hell, why not put battery-charging stations in instead? And wifi in every station? Now you'd save some lives. And allow people to tweet from inside the tunnel, which is what we really, really, really want to be doing as the world slowly burns and Beelzebub prepares for yet another record year of immigration.

Posted by Clarkson FlatBed at 10:31 PM

Yes to everything here. Wifi and charging. A much better plan.

You're 100% right about what would be better... but unfortunately government anything is a slow process. This was a great addition like 5-8 years ago when they started popping up in the Manhattan lines full of tourists without smart phones. Unfortunately they are outdated before implemented and no one stopped the silliness. It's like the guy that got pay phones on a 10 year contract. How did they ever get that deal with the city?! They were also out dated 5 years ago... but they are stuck existing and falling apart, at least for now.
Thankfully our bus stops are starting to get smarter than a silly post with a vague line map.

Would love to hear your thought on those new Internet kiosks going up around Manhattan. So far, the only thing I've seen one used for is some guy blasting annoying music from it. .