What Knucklehead Ordered This? 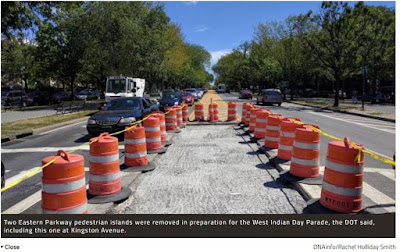 Thanks Rachel at DNA for telling the story much more delicately than I would have. As the deposed Transportation chair at CB9, perhaps I'm a little too close to this. But WTF? Has the city no sense of proportion or decency? Somebody is behind this, and they should be taken to task for wasting our money and ignoring pleas for safety improvements on the speedway. If somebody gets killed in these spots going forward, I hope they're prepared to sleep poorly.

After being identified as some of the most brutal intersections in the City, folks have been begging for DOT to do something at the intersections of Eastern Parkway for years. Now comes word that after installing the protective islands they're pulling them out and leaving them out. For the West Indian Day Parade, which takes place one day a year. For safety concerns? How does one day of parade compare to 364 days of pedestrian traffic? Safety? Good Lord the irony.

This could only have been the work of someone powerful enough to reverse a long-made decision. Who was it? If you know, let us know. I'm thinking BP Adams or perhaps the power brokers of the Chabad community. And no disrespect to the religious Jews, for whom Kingston/EP is a holy locale. They're entitled to ask, if in fact they did. But we should be entitled to stick with the plan if the numbers are for it. Oh hell, I don't know yet who did this so I shouldn't guess. Fucked up though.
Posted by Clarkson FlatBed at 10:16 AM

For a parade????? This was a lot of money, money that needs to go toward improving safety and infrastructure not dismantling it. Definitely find out which politician ordered it, Q, write about it and get it in the tv news, the NYDN.

This is simply pig-at-the-trough local government that spends your money under the mantra of "More Government Please!" --using the opportunity to enrich friends and family.