In another mind-twisting show of down-is-up, expect anti-homeless forces to come out and decry the creation of temporary shelters in their backyards, down the block, or even on the other side of the neighborhood. Tonight's "show" will be yet another opportunity for people to scream at elected officials. The irony? This time, instead of complaining about (mostly white) gentrifiers they'll be complaining about (mostly black) poor people. Because, you know, the only people that deserve a place to sleep at night are those that fit Goldilocks/Baby Bear's "just right" demographic. 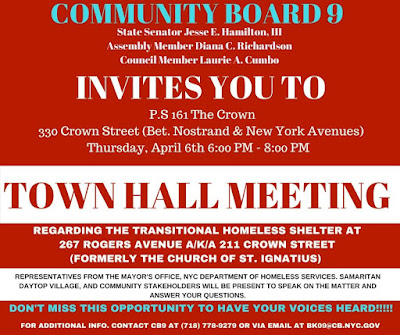 This one is pretty nutso. You know that church, St. Ignatius, that they tore down to make way for this? 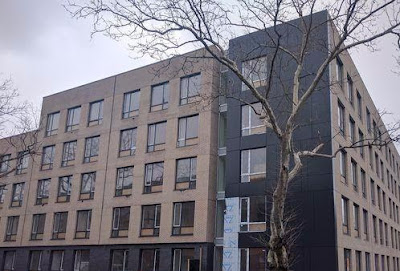 The City's gonna lease this as a Homeless Shelter.

So at tonight's meeting, the real issue will come to the fore. "We" don't want gentrifiers. But we don't want actually-poor people either. It's kinda poetic, in a way. True colors coming out and all that.

Getting real here. You can't decree a housing shortage by restricting supply. You can't rectify affordable housing crisis without building below-market housing. You can't help the homeless without rental subsidies. You can't protect homeless families without secure shelters with services. And sometimes, in the big city, you're gonna have to deal with that. You chose to live here, you trumpet NYC's virtues of inclusion and diversity - well, you get the idea.

I've been living around supportive service housing, transitional housing, halfway houses for YEARS, in six different neighborhoods. And on Clarkson, there are four separate facilities within a block for otherwise homeless individuals. Only 60 Clarkson rose to the level of desperate problem, and that had nothing to do with the City. It was the greedy, cruel landlord, and a lack of ANY security.

Every neighborhood should shoulder the burden of helping other people, if in fact it's really that big a burden. I just went to a meeting at Kickstarter out in Greenpoint yesterday, and it seems like there's some space out there too. If the City starts getting real about creating transitional AND Affordable Housing, maybe there's something to this. Then again, the solution needs to be holistic. That's a lot to ask.

In the meantime, look for a whole lot of hooting and hollering.

But it's worthy remembering that we're all in it together. And either we have compassion and provide for our down-on-their-luck brothers and sisters or we don't. Or we move to Indiana where they wouldn't put up with this homeless shelter shit. I'm taking my chances right here.
Posted by Clarkson FlatBed at 3:02 PM

Correction, Tim. The shelter is replacing the luxury housing just built. There will be no market rate tenants in the 267 Rogers, the new building on the site of the former church.

DHS initially named 265 Rogers as the address of the shelter, but it's actually 267. So that huge, fancy new building? Shelter.

Getting real here. You can't decree a housing shortage by restricting supply. You can't rectify affordable housing crisis without building below-market housing. You can't help the homeless without rental subsidies.

For a guy who visited Cuba and saw for himself what happens when the government sets the terms for, well, everything, you oughta realize these commie ideas don't work in the real world.

Meanwhile, there are about 1,000 acres of vacant land -- restricted land -- out there at the end of Flatbush Ave. Good old Floyd Bennett Field, suitable grounds for low-cost housing. However, it seems there's no will to wrestle it out of the grip of the federal government. On the other hand, maybe Trump the deal-maker would see the advantages of turning it over to NY City?