It's Official: Amazon Go To Open In Western Beef Location

Okay: I've had my fun. Thx for all the incredulous emails! Made my weekend...til next year!

Many of those tracking the on-again off-again attempts to rezone Empire Blvd thought the most likely scenario was a hotel, barring rezoning for market & affordable housing. Then a few months ago word trickled down that Home Depot was looking at Western Beef for one of their new Home Depot Express stores. Maybe a bidding war ensued...anyhow, here's the poop, direct from my friend Dave who now works at Amazon in Seattle running the marketing for that pesky device the Amazon Echo, the one that sits in your house waiting for you to call its name and order more toilet paper or determine the weight of an African (or European) Swallow.  Bottom line, without a single community meeting or rezoning request, here comes: 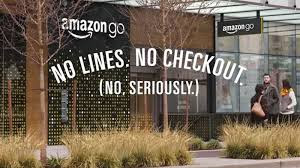 Western Beef (lock, stock and parking lot) signed over its land last week. Look for demolition over summer with a launch as soon as this time next year. Shouldn't be too tall, so I guess MTOPP will be pleased, though the increased traffic might bug some Sterling residents. THIS project has major buy-in from De Blasio, Eric Adams and likely most of the City Council. Jobs, innovation, a chance to hobnob with Jeff Bezos. Funny. Had it been Wal Mart they'd all be blowing their tops.

We shouldn't be surprised. Brooklyn is the undisputed King of Kool in the East, and this will be the third store to open after Seattle and San Francisco. I suspect they could even eat a loss for some time while building their brand. God knows it's what Amazon did for YEARS as it built its empire. Hey, that kinda has a ring to it. The Empire on Empire. It's Amazon's world; we just shop in it.

Here's what they expect you're gonna do, when you don't have two whole days to wait for a product on Prime. Maybe you need lunch, fancy Paprika, or vegan floss. Even if it's one of about 20,000 popular items from garden gnomes to candle wick trimmers , you can just order it by noon and pick it up after 6 at one end of the building. But if it's grocery or household items, you just pop in with your smartphone and leave without seeing so much as a cashier. How much time does this save you over, say, Whole Foods? Not much I suspect. Seems like a bit of a gimmick. The lines at Whole Foods are never bad anyway (so I hear; I'm a PSFC kinda guy). But the young folks will LOVE it, and we old folks will probably find a way to identify the trend as the exact moment that civilization ceased and the borgs took over.

For more propaganda from Bezos and Co., just check out their marketing video below. Then, if you haven't yet seen it, click the video below THAT which shows how drones will soon be delivering your goods directly to you within the hour. Amazing. Or rather, Amazonazing. Or Amayonnaising (because you can get mayonnaise, get it? which I just discovered has two n's).

Fantastic! More vehicular traffic on our roads. Now all we need is a Ramen shop which will really have us on our way.

Great scoop Tim, in addition I've learned that Amazon is simultaneously kicking off their new abattoir division with a 20 story X 20' building on Empire directly behind a certain house on Sterling.

You all have it wrong! Whole Foods has already made that deal.

I heard De Blasio is invalidating the Landmarks Commission. They are closing Riker's Island and building the replacement on Maple between Flatbush and Bedford.

But seriously, is this an April fools joke? I can't find any mention of this anywhere else.

Right you are, Frank. Check out past April Fool's on the Q. I always have a good time with this. Sorry, or not sorry, depending on your perspective.