Brian Cunningham crushed do-nada incumbent Mathieu Eugene tonight in a debate 48 hours before the Election Day polls close. The moderator's questions were solid, the event marred by raucous vapid applause from Eugene's small but loud gaggle of minions. But after final comments, Eugene blasted debate host (not moderator, host) Duane Joseph for being a biased moderator, a Cunningham surrogate. Craaaazy, y'all. Duane merely welcomed the crowd and ran the p.a. Why would you piick on the Gentle Giant? And if that weren't bad enough, Eugene refused to shake his opponent's hand, or as a rascally pundit noted, he went all-in with the Papa Doc optics (hey, I didn't say it, but he was posturing like a dictator). As in seriously, check this shit out:

For a more professional and unbiased account of the debate, check out this from your good friends at BKLYNER. Needless to say, many folks were shocked by Eugene's and his supporter's antics.

The basics of the debate went something like this. Solid question, solid answer from Cunningham, meandering pandering nonsense about "we must work together" and "I have been fighting hard" and then even a few lies like "my office is number 1 in constituents served" and perhaps the strangest answer to "are you pro-choice?" I think you could possibly concoct. I'm still trying to make sense of it.

Eugene was responding to the fact that Planned Parenthood refused to endorse him, because he hadn't come out against Pro-Life fake family planning clinics - abstaining in fact. Eugene talked about having delivered many babies (though he's lived in the U.S. for decades and never practiced here) and how when a mother is giving birth and is given the option save her life or her baby's, it is a very personal decision and she must make it, and of course she chooses the baby. You could almost see an entire roomful of people straining to figure out what the hell he was saying. But wait a minute...as a doctor isn't he SUPPOSED to save the mother's life? And how often does one even have time or inclination to present a mother with such a Sophie's Choice? I mean, is he just totally making this shit up??? I'm not even sure he answered the question at all, at least not as it was asked. So very, very strange. And whenever he equivocates, his accent gets suddenly WAY thicker, like he's purposely trying to be misunderstood (not mocking his accent here - but I've noticed this over the 10 years that he mumbles when hoping not to be heard). But seriously...what the fuck was he saying about life of mother/baby scenarios?? It's actually haunting me.

And even if the debate hadn't been so laughably Cunningham's victory, this next picture tells you all you need to know about whom to vote for on Tuesday. End of the night, after Eugene has long since left with his disrespectful supporters (I particularly like the Eugene groupie/staffer Soumia Chraibi who gave me the finger while calling ME out for booing his rejection of a handshake - classy!). BC spent the remainder of the eve taking questions from everyone who wanted a moment of his time; then Cunningham helped clean up the room.

Don't let this once-in-a-lifetime opportunity to change the neighborhood's course pass us by. And tell everyone you know. 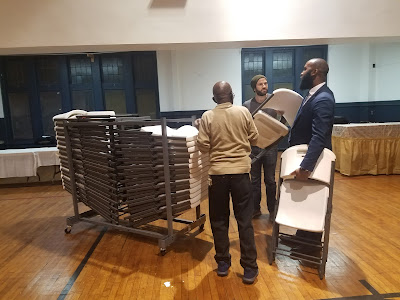 Posted by Clarkson FlatBed at 9:44 PM

As a public employee for the City who enacts projects the Council Members Fund. I can attest that Eugene regularly no-shows scheduled meetings without letting anyone know, and that agencies groan when they have to work with his administration. Not good for the district.

The question remains -- how many illegal voters will Eugene pay to vote for him? The number will be revealed after the polls close Tuesday. Obviously Eugene the clown is no more a doctor than Colonel Sanders was a colonel.

Eugene is a total nutcase. I really hope people get off their asses and vote for Brian tomorrow. We need real leadership in this district!

Eugene is a disgrace, and an idiot! We need strong leadership in this community and I hope the community vote this guy out tomorrow. There is so much that needs to be done:our streets are filthy; traffic is getting to be impossible, gridlock on Bedford avenue; cars are often speeding down on Flatbush and Rogers; cars are double parked; store owners do not clean in front of their stores or pick-up litter; our side of the park is deplorable. Please go vote!

Needless to say, many folks were shocked by Eugene's and his supporter's antics.

Anyone who was shocked by the clowns in the Eugene circus has been unconscious for way too long. Poll watchers had better keep an eye on Eugene's operatives today. They will lie, cheat and steal to boost his numbers in the voting booths.

Cunningham should demand a vetting of every voter in the district. And it wouldn't hurt to confirm that Eugene himself is a legal citizen either. He's scammed his way through the city for a long time, duping voters and anyone else unfortunate enough to rub shoulders with him. Would it surprise anyone to learn that he scammed his way into the country, too? Perhaps he's eligible for Trump's list of deportables?

Note to Cunningham supporters: The Reform Party line and Brian C. are on the far right side of the ballot. Our council race also has a Republican candidate (who knew?) named Brian. Writing quickly and sort of on mental autopilot, I almost voted for the wrong Brian. Just be aware...

Art, Tim, I just wrote a really long, eloquent post, and then hit the wrong button and lost it! But anyway, the gist of it was I know people have called you out for some of the things you say, but you're not wrong on many points. Eugene is operating straight out of the Duvalier playbook and his supporters embrace that because they're used to it. Just be glad he doesn't have the tonton macoutes (except for the paid flyering types and debate disruptors).

Mathieu Eugene doesn't need illegal voters, he has a ready supply of legal ones who will happily accept a pre-completed ballot and cast it legally. To accuse him of illegal voters smacks of Donald Drumpf. He has a base of mostly older, unsophisticated voters whom he reminds of home. And he is a medical doctor, educated in Belgium and Mexico, but he has never been certified or practiced in the U.S. Regardless, he needs to go. I just voted against him for the fifth time today (How is this even possible? Two special elections to replace Yvette Clarke (the second because he didn't live in the district the first time, and some would say still doesn't) and now 3 regular ones. Tim I wish we'd talked in 2007 before you made the mistake of voting for him - I would have set you straight!

The NY State voter registration form makes it easy for illegal aliens to register. Due to the payoffs from corrupt clowns including Eugene, illegal aliens have reasons to vote.

What if a Poll Watcher Challenges My Right to Vote?

Answer: If a poll watcher challenges your right to vote, e.g., states that you are not the person you claim to be or that you don't live in the district, you can ask a poll worker to administer an oath to you to affirm your qualifications to vote. You will swear under penalty of perjury that you are eligible and qualified to vote, after which you will be permitted to vote on a regular ballot.

No ID required. Could it be any easier to cast phony votes?

Regarding Eugene: And he is a medical doctor, educated in Belgium and Mexico, but he has never been certified or practiced in the U.S.

Yeah. He's a doctor and the Pope has a PhD in Chemistry. Please. He's a fraud.