Garden Shadows? Not So Much

Wow. Did you see the latest DC Palace Intrigue? It don't get much intrigue-ier. Senior Officials inside the White House calling out the President as immoral? Or amoral? Both? Like as in...you know what that is, right? Sociopath. We already know he's a narcissist, and probably borderline personality. And a pathological liar. Why aren't we out in the streets? If ever there were a time the world needed moral leadership... What's that got to do with a meeting about Franklin avenue rezonings? Nothing. Just blogging. Back to the local beat... 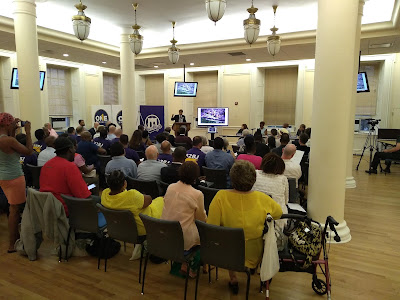 Here was the Tuesday meeting at BP Adams' Borough Hall, where-at yours truly gave a tearful testimony to the need for affordable housing, as in rent-stabilized apartments less than $1,000, because working people really can't afford to live here any more. But the Q's voice was drowned out by the activists who claim the Garden will become a dust bowl due to the rezoning of a couple of plots (40 Franklin for one) to make way for hundreds of new apartments. Hundreds of which they'll build anyway, but through the City's Mandatory Inclusionary Housing program, we would give them a few extra stories and we get a boatload of affordable units. AND the market rate units are stabilized too. A few years ago such a bonanza would have sailed through. Not now, thanks to scare-pictures like this one: 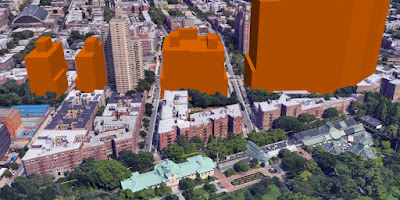 Yep. A planned 17 1/2 story building will, after rezoning these specific spots, miraculously grow to be twice that height, brownish-orange, with no windows. Or, if you are less prone to propaganda, you might consider the following rendering: 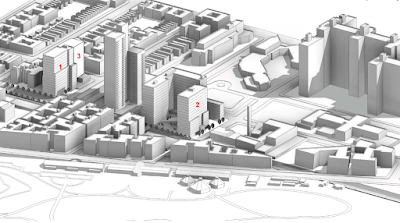 The Q is damn sick and tired of these arguments, fraught with notions of how adding a few stories will lead to MORE gentrification. Jesus, like it ain't on hyper-drive already. Like we don't actually need more apartments in decent neighborhoods. Like the plan isn't already for HUNDREDS of new market rate apartments Not stabilized.

Of course no one but me and a guy from a Haitian civic org came out in support, so I might as well sneak back behind Blogger where most fear-mongering activists would prefer I stay.

Or as one guy said to me - "your opinions aren't wanted here."

That's where we're at folks. Discourse is not wanted around here, whether in Congress or at Borough Hall.
Posted by Clarkson FlatBed at 8:08 AM

What about the height issues discussed in the comments here? http://theqatparkside.blogspot.com/2016/04/tonight-round-one-of-plgna-vs-mtopp.html?m=1

Great work Timmy! We can always rely on you to deliver for us! You stuck to the script perfectly, just like we discussed. You kept it free of facts and confusing stats and gave an oscar winning emotional performance.

Keep your eyes peeled for your "bonus" check. And say hi to the wife and kids. We really must have you over again soon last time was so much fun.

Tim consistently makes a good point on this development topic. A "no rezoning" position is only hurting the poor and working poor. Alicia Boyd is crazy and has her own ulterior, selfish motives. And just look how god awful ugly Empire Blvd is because of the current zoning. Can you imagine how beautiful Empire Blvd has the potential to be? Same thing for Rogers Ave with its super-wide sidewalks. So much potential! One way or another, gentrification and new buildings are coming. If you are a community leader, you might as well try to get some concessions out of developers as they take their brushes and erase whatever affordable housing remains for the working class. On my street alone, there are three projects (not big ones) and they will all be market rate stuff. Hardly any of new developments have rent control or an affordable housing component. Good for me (the yuppie) and arguably also good for lower income folks because then the streets will be cleaner, properties will look nicer, and PLG will be less of a food desert. I for one totally welcome that. Long time residents should be grateful for any 80/20 opportunities.

The effects of development on sunlight in public green spaces is a legitimate issue and many cities have ordinances to protect parks from being cast in darkness (NYC does not). There was a major fight in the 1990s to stop a number of buildings around Central Park which would have been significantly shadowed by a number of projects. That battle was won but sadly flash forward to last the few years and a lot of new towers will indeed make CP a much less sunnier place.

That being said, I have no idea if the objections to these local developments are legitimate or about something else entirely. However I am just sayin' the topic is real even if this is not.

It looks like the mainstream press is finally starting to look into the MTOPP's illegal finances issue as it relates to improper cooperation (dare I say, "collusion"?) between Alicia Boyd and Jesse Hamilton's campaign.
https://www.politico.com/states/new-york/albany/story/2018/09/12/attacks-on-myrie-raise-questions-of-improper-electioneering-605023

I sincerely hope it's not a case of too little too late here and that Hamilton goes down hard in the primary tomorrow.

Jesse Hamilton is appears to be keeping illegal office space when the space can be used for actual low income residents!

"CORRECTION: Sep 6: 4:00pm– In an earlier version of this article, Boyd was quoted as stating Sen. Hamilton helped fund the organization’s shadow study. That is incorrect: Hamilton supported the group’s effort by providing space to hold the shadow study presentation and also informed his constituency about the event."
https://www.bkreader.com/2018/09/04/a-fight-to-keep-brooklyn-botanic-garden-out-of-the-shadows/

Question: Who then funded the organization's shadow study? So, Jessie Hamilton helped fund the shadow study by providing space only which then resulted in more donations ? Or did some third parties or "friends of Jessie Hamilton" indirectly fund the shadow study ? If you fund money for a Senator who later helps you get money for a study is this NYS lobbying ?
https://jcope.ny.gov/system/files/documents/2018/02/chapter-6-reportable-business-relationships_0.pdf

Question: Is "New Directions in Healing" a NYC Lobbyist who is lobbying for MTOPP who to oppose a ULURP determination on Cornell deal (...which deal would be an argument for higher MIH in future decisions on Empire obviously.) http://cityclerk.nyc.gov/html/lobbying/NYC%20Lobbying%20Law.shtml

These are all questions that need to be answered by a Good Govt group.
Forget the wine, just get me some cheese.