From Toomey's to Tuborg 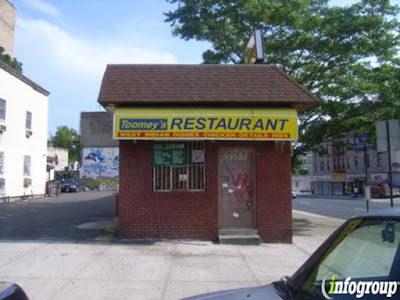 Been here more than a decade and chances are you ate at Toomey's, if not often. An old school greasy spoon, it really hit the spot in the days before Blessings and Gratitude (if you get those references, you've probably been here for more than a year at least. K-Dog anyone? Blue Roost?)

Seems it's become a Public House, perhaps a Beer Garden (there is space to do so, what with the old parking lot.) A Roxie Bird alerted Eff Book that a liquor license is in the works and sure enough here tis, The Smoking Gun. Or rather the Tilted Glass.

Anatoly Dubinsky is on the application, and he just happens to be an owner of Franklin Park up north of Eastern Parkway, a pub that on a nice day looks like the below, similar dimensions and all. 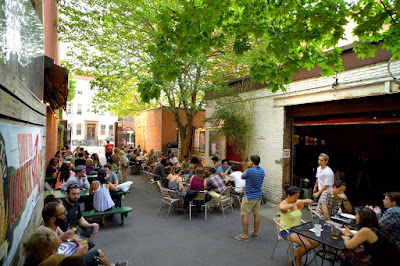 I know, I know, I know. Don't even say it (or do, it's a free comment section.) I'll leave it at this. Nightlife along Empire Blvd is probably a reasonable use of the commercial zoning, along with (obviously) crematoriums, storage marts and live poultry places. You know, classic C8 businesses that are allowed. Including craft beer gardens that serve Shiner Bock on the low end to entice recent immigrants from the University of Texas at Austin.

The Q would prefer to see not-too-high housing for low to moderate incomes. Safe to say, though, that a place like this will put upward pressure on rents and developers, not that they needed a lot of help.
Posted by Clarkson FlatBed at 11:27 AM

Franklin Park is a great space, hosting book readings and other cultural events. I think a similar venue would be a wonderful use for this space, and I, for one, am thrilled not to see another "luxury" rental building going up (with "affordable" units that are affordable only to people making way more than most people in the neighborhood). And isn't this block still included in the zoning that prevents new residential construction? So what choice would we have - more self-storage? Bring on the beer garden!

Thanks for getting the scoop for those of us not on Fedbook! I live across the street from old Toomey's and I've been trying to peek through the windows to no avail. I'm mostly just relieved that it's not another frigging storage facility and that it will no longer be a dumping ground for people who miss storage unit payments. Ooooh, I bet we'll also have regular cleanup for the garbage heap that constantly piles up at the SBS stop! With all that goodness, 3ven if the food sucks,I'll patronize!

Sorry Q, I'm for this one as well. That area is disgusting as is, and it's better than another storage unit.

I'd rather see this than super tall luxury housing. But I still think it's prime for low income housing, or at least significant below-market rent stabilized. Though I don't suspect that'll win me fans down at Ye Olde Gentrifiers Club.

But the land remains the land, and if someday the zoning allows, I'm sure you'll see taller and taller buildings with time. Owning this property is not a bad investment...short OR long term. Brooklyn real estate...they ain't making any more of it. Just building up.