Klosings and Korners - And A New Veterinarian

As the neighborhood's transformation continues in stride, changes abound that once would have garnered speculation and concern. Now, they seem inevitable, unsurprising, a near-constant churn of economic reality.

Take the closing of Bargain Hunters at the SE corner of Flatbush/Clarkson. Is anyone really surprised by this one? This has always been my go-to for household goods, though I'm now enamoured of the ma & pa discount store across the street next to the Tower Appliance store, another surprise hit for those of you willing to shop local for everything from refrigerators to laptops. Folks have been speculating about residential tower at the below site, but the workers told neighbors it'll be a grocery store. Before you guess Union Market or some such, consider that the green-grocer at the other end of the block (Flatbush/Lenox) just closed after 20-30 years.

BUT WAIT. Just today, up goes a sign with that familiar jingle jingle price of 99 cents. (So much for those $10 artisinal organic chocolate bars with so much salt you can't taste the goddam sugar!) 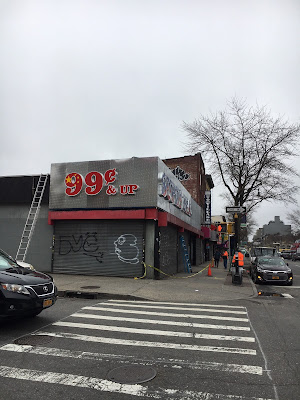 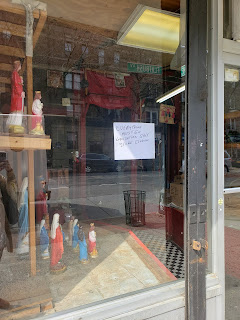 Sad news for fans of African-origin religious curios and icons and candles and spells, as the quintessential NYC Botanica Ferreile at the corner of Chester and the Flabenue is soon to shutter. Stores like this service serious and casual practitioners of such religions as Voudun and Santeria, the remarkable mixtures of anima spiritual traditions and the idolatry of Catholicism forced upon slaves by missionaries. That these religions survived is a testament to the power of magic (my word) in the lives of billions around the world. I loved looking in, but I'll admit my stubborn agnosticism kept me from wandering inside, because despite my disbelief, I'm still a bit spooked by this stuff. I'm a boringly modern human, which means I'm a post-Hegelian mess, forever doomed to be a walking talking contradiction of non-belief and superstition. 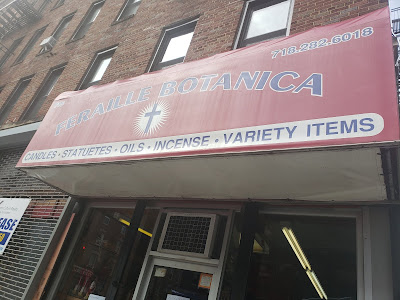 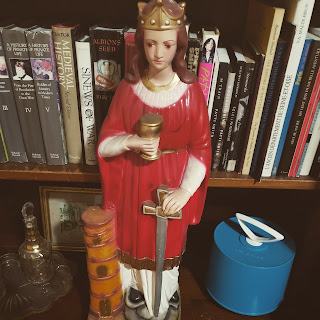 And then of course there's THIS korner. Who amongst you has not gasped in horror? Granted, no one will die because of this hideous tumor atop this grand old korner apartment building, but damn, this is perhaps the worst job of building enlargement I have ever seen. A too-small helmet on an old centurion. Sheesh. 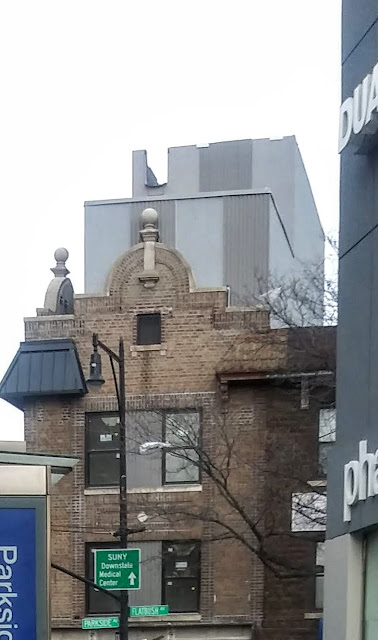 Oh. And a new veterinarian. There is no logical tie-in here...just noting a place to bring your pets for a tune-up. Flatbush below Woodruff. 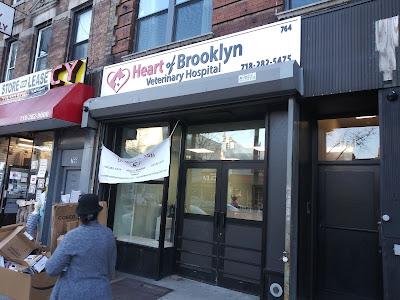 Posted by Clarkson FlatBed at 9:36 AM

Back in the late 90s or early oughts, there was a botanic on Flatbush Avenue between Prospect and Saint Marks. The cellar doors were open one time I walked by, and there was a white chicken (or maybe rooster?) walking around. I guess someone had an upcoming court case or lover's spat or who knows what?

The green market closing on Lenox hurts. Their watermelons were seriously the best on the strip.

my name is Promise dickson Finch am from Texas USA. I want to share a testimony of how Dr. OLU herbal mixture cream saves me from shame and disgrace, my penis was a big problem to me as the size was really so embarrassing,and i was also having weak erection problem. I can make love to my wife and my penis was just too small a full grown man like me having 4 inches penis and to worsen it i don't last in sex i cant even last two minutes it was really a thing of shame to me. My wife was really tired of me because my sex life was very poor,she never enjoyed sex,i was always thinking and searching for solutions everywhere until when i saw a testimony of how Dr. OLU. herbal mixture cream have been helping people regarding their sex life, so i decided to give him a try and to my greatest surprise in less than two weeks of taking the herbs my penis grow to 8 inches i couldn't believe my eyes and as i speak now my penis is now 8 inches and i do not have weak erection again. I can make love to my wife longer in bed. And my marriage is now stable,my wife now enjoy me very well in bed. You can contact him via (drolusolutionhome@gmail.com) You can contact him today and get your problem solved.Call +2348140654426 .." or you can also contact him through his what-app +238140654426

I was cured from my herpes Disease. after suffering since 4years ago. but when i contact doc onokun on the internet. he gave me a Natural cure that ended my suffering after using it for two weeks. i went to check myself on the hospital and i was tested negative. I can't more happier but to say thank you sir and i use this medium to say to everyone don't waste any time to contact this powerful herbal Dr,onokun On any Kind of Disease he is Ready to help you. You can reach him through his email: dronokunherbalcure@gmail.com