In Search of Unity

Last Thursday, a meeting took place on the other side of Nostrand, at St. Gabriel's church. The poster, which I only saw the day before and hadn't time to post here, looked like this: 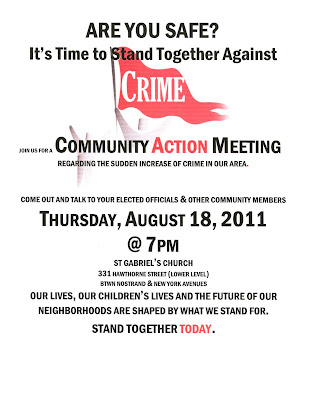 What's striking about that meeting, to me, is that it took place on nearly the same street (Hawthorne) but two avenues over from the PLGNA crime meeting on July 14. (that meeting happened on Bedford, at the Church of the Evangel). Different organizers clearly saw the need for action, yet the call to arms produced two very separate scenes. There were some members in common, but not as many as you'd suspect. Which begs the question...

I've always thought of NYC neighborhoods as organized more by public transportation than anything else. If you live on Nostrand or New York Ave, you might well consider the 2/5 your hometrain, and the businesses of Nostrand would likely serve as your "downtown." So I'm not terribly surprised to see community organizers focusing locally, near trains and shops. And we're not the only ones who micro-organize the 'hood. In speaking with a reporter from a big City rag, I found out that the police break down their precincts and crime statistics into "sectors." The PLG sector of the 71st, one of five, has less crime than others, and that's perhaps why we see less police presence. I say "perhaps," because at one Precinct Council meeting I attended, some Crown Heights folks were saying the exact same thing! More accurate, maybe, is the fact that everyone is demanding more foot patrol, and there's only so many feet to go around.

Here's one thing I know: a cohesive and effective response to the presence of guns, drugs and violence is going to mean working as one. The bad guys don't give a damn about demographics - they'll just move from one area of the 'hood to the next. That's why it's important to consider the Community Board and Precinct holistically, in my view. Plus, not everyone responds to the same sorts of outreach. Email and listserve may be good for some; church groups, tabling and handouts for others. Posters are always cool, though you might want to consider taking them down after the event. Or Carmen might nail you! (see article on her in the Echo).

Which reminds me, the new Lefferts Manor Echo issue is out! A "story" on the PLGNA crime meeting, which is frankly more an op-ed than fact, was penned by long-timer Milford Prewitt...but it's well worth reading and some points are spot on. Lefferts Manor Echo.

Posted by Clarkson FlatBed at 2:49 PM

Thank you for that comment about the Echo piece. Seriously, when I read it I wondered if I'd attended the same meeting, as it seemed a lot more unified to me than the article implied. Indeed, I only remember one person making a comment about how new businesses in the area weren't hiring long-term residents; when pressed for examples the only two she could name were a wig store and the grocery on Rogers and Parkside, neither of which made much sense. Maybe I'm a clueless optimist but I felt a lot more unity from all members of the neighborhood than that article would imply.

Sunday evening I emailed Senator Adams to inquire about the shooting that took place on Flatbush Avenue. Within an hour Senator Adams responded to my email. I must say that I was quite surprised and pleased. He gave out his personal email while attending a meeting at my school.

I normally don't write on these blogs but I took great interest in the posting as well as Senator Adams’ previous post on community participation. It finally dawned on me why Senator Adams is often referred to on Blogs and discussion. He is accessible.

Think about it. Which other elected official gives out their personal email and cell phone? Do they respond to your calls and emails? Try to get a meeting with an elected official. Good luck. Lol.

Over the years, I have come to realize that people have a tendency to attack the folks we can reach. I must confess that I have also been guilty of this too. At this point, let’s parse out the real issues and stop hiding behind a veil of finger pointing:

• The responses on the blog are critical of elected officials, when the real issue is the social apathy which is rampant in our neighborhoods. Actually, the blog posting itself epitomizes the high level of apathy in our neighborhoods and communities. Just about all of the posts talked about what others were going to do to solve our problems. What about examining what we can do? It’s called looking in the mirror.

• As Senator Adams pointed out and many of us overlooked, there were witnesses of the shooting, yet no one came forward to report the crime. (Apathy)
• Generally speaking, people do not attend Parent Meetings at schools, community board meetings, precinct council meetings or community education council meetings. (Apathy)

• For the many years that I followed Senator Adams’ career, he has been a very responsive public servant. When you read some of the posts on this blog, you would think that he shot out the windows of the sneaker store. He outlined some specific action steps for us in his email, including establishing a neighborhood patrol. As I drive through Brooklyn on a daily basis, I see other communities have moved beyond complaining and effectively established neighborhood patrols. So, why can’t we? In fact, In fact, Senator Adams used his own money to buy vests for several safety patrols in Brooklyn. The article I read indicated that he was willing to help establish other patrols throughout the District. How many of you would be willing to donate time to join the patrols or are you too busy?

• One email chain that I received, the author stated that we pay Senator Adams to keep us safe. Unless I am missing something, the man retired from the Police Department. It is the job of NYPD to keep us safe with our participation, as he has tried to share with us, but, it appears we hear what we want to hear. His role now is to partner with the community to provide services. One of the things we should do on a regular basis is attend Commissioner Ray Kelly’s Precinct Council community meetings and complain. We should also email his community affairs liaison to set up regular meetings in our area too.

Here’s the bottom line: I agree that there is room to examine how well an elected official is doing their job, but, we have got to do our part, and there’s no time like the present. So, I am calling on our community to stand up and be counted in a real way and to stop this online bickering which we call blogging. It’s time for us to stop the false finger pointing and team up with NYPD, elected officials and related community based organizations and agencies to develop a concrete safety plan for our community, which we have to help carry out. I will be at the Senator’s office on Saturday morning. Will you be there too?

Thoughtful comment cheerfully accepted. Let me be the first to say I like Eric Adams a lot; it's Eugene I could live without. See you Saturday, and please introduce yourself, Mr./Ms. Sorento Sorento.

and wrapping up a late night of work - I just heard about 5 shots or so in the distance..

Checking the only outlet that reports these occurrences on the web


I will be at the meeting this weekend...

Let me add my voice to the chorus of support for our Senator - he is responsive, accessible, and very involved. I have pledged every fibre of my being (and spare dollar in my wallet if need be) however to ensuring that Mathieu Eugene does not remain in office after his current term expires. And trust me - he is NOT accessible OR concerned in any way about this area.