Where to Dine Between Shootings

Yesterday, two more shootings reported: one at Original Struggs at 675 Flatbush (early eve), the other a doozy at 60 Clarkson (well after midnight). I'm too tired of talking about the Guns of August to track down the details. Feel free to post what you know...

If you're in the mood for some of Parkside Ave's "People's Choice" rice and peas or ackee fish, there are two reasons not to bother. One, it's closed, with the most peculiar of signs: 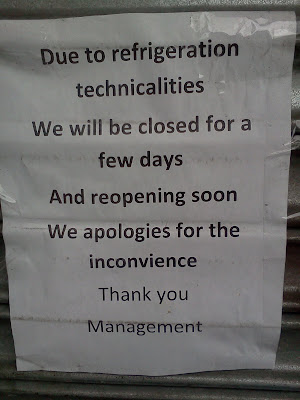 Refrigeration Technicalities is shorthand for...you might as well be dining in a Port-o-Potty. The place was shut down for no less than 80 violation points, including:

This from the NYC Dept of Health's amazingly useful Restaurant Guide. It's the Zagat's of filth. The graphics need a facelift, but hey, it's a City agency...

It's a shame really. Parkside's Restaurant Row centered on the deliciousity of People's Choice, once known as Exquisite, which, ironically, won Best Jerk Chicken according to a certain Dan McLeod (I know, I know, the one on Church). One thing I'm sure I'll miss...dining al fresco outside Exquisite while peering up at this gestapo-inspired prison wire atop the Duane Reade: 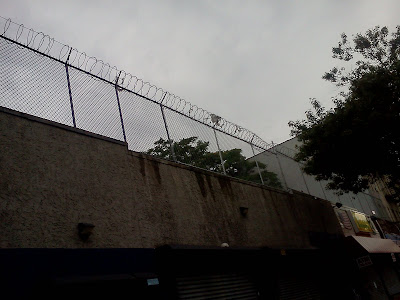 By the way, I have it on good authority that this sort of barbed wire is now illegal in the City. I guess because it...is so good at keeping people in or out? Not sure the thinking there...I'll look it up between shootings.
Posted by Clarkson FlatBed at 11:58 PM

I was about to email you about the shooting at 60 Clarkson.

I was up, sleepless. There were *a lot* of shots and it sounded like the shooter(s) drove off still firing -- I heard more shots that sounded a block or two away.

The ambulance took one person away, who looked conscious to my nearsighted eyes from my somewhat remote vantage point.

Joe Friday and his partner were haunting our lobby (nearby) during the downpour yesterday (in their bulletproof vests, which struck me as excessive) looking for information. I don't think they got much since no one hangs out in our lobby.

They asked if I knew anything. I resisted the urge to explain that "what happened" was that four decades of a losing war on drugs had vastly exacerbated violence by forcing the drug trade underground, while years of manditory minimum sentencing and total disenfranchisement of convicted felons left an awful lot of people with nothing left to lose. Meanwhile the NYPD has turned a blind eye to the fairly obvious drug dealing going on at 60 Clarkson, allowing the drug market there to flourish.

I didn't bother, though. I do have some judgment.

That's what I know. It sounds like you don't know more.

And apparently another shooting tonight on Hawthorne bet Bedford and Rogers. Can't wait for that meeting w Sen Adams. Come one, come all!

I thought I heard something, but it sounded north of Hawthorne. Any details Babs?

The shooting on 8/27 was at 150 Hawthorne, between Bedford and Rogers. Despite the impending hurricane, EMT and NYPD responded quickly. Bystanders said the victim (a young man) seemed to be talking on the stretcher, so hopefully he wasn't fatally wounded.