Since I know most o' y'all are going to the Kiddie Disco benefit for the Lefferts Gardens Montessori school this weekend, it stands to reason you'd want to put another nursery school benefit show in your calendar. This one's for Maple Street School, the adorable little larnin' joint just next to the Q/B at Prospect Park. And it's a doozy, featuring music from Maple Street parent Cap'n'Kirk of The Roots. Here's the sexy promo poster: 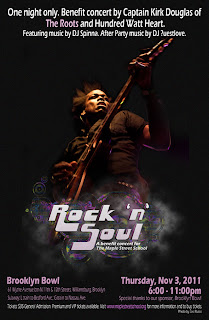 If you're a Roots fan you're all over this like white on rice. You should also note that none other than ?uestlove, the thump of the band, will be spinning records after the Cap'n' lays down his groovy noodles. Mr. ?uestlove was voted 8th best drummer OF ALL TIME by Rolling Stone. Which is really remarkable when you think about it. Not that Questlove is a great drummer - he is, but that Rolling Stone actually still exists. (Neal Peart is on the list too, and Buddy Rich. Is Bonham number 1? But of course! But Buddy Rich over Max Roach or Elvin Jones or Tito Puente?) DJ Spinna opens, and the whole show is over by 11, so don't tell me it's too late for your creaky self. Me and the Mrs. will be there, provided Little Miss Clarkson Jr., II doesn't arrive early.

This show is happening in Williamsburg, Brooklyn, by the way. Not Colonial Williamsburg, as was initially reported.
Posted by Clarkson FlatBed at 11:01 AM

Thanks for posting. Will be a great night! Just to add, tickets can be purchased online at www.maplestreetschool.org