The Q spoke to Chad, of Chad & Kola, the partners opening a new espresso bar joint on Flatbush near Lincoln Road, just up from Gino's. Should be small but sweet, and it sounds like the two really know what they're doing. Glad to be the bearer of good news that just as soon as they can get ConEd to sign-off, they'll be pouring their preferred brew (D'Amico's I believe he said) by January. ConEd has been the hold-up, since they're pretty overwhelmed since a certain Sandy passed through town. Kola worked at Blue Ribbon, which I patronized one time with a frisky toddler and swore never-again to go to a swank spot with a child in tow. As I recall, it's a place of some culinary swagger, and I suspect our young Flabenue newcomers will know a thing or two about running a shoppe. Here's to a good run, guys, 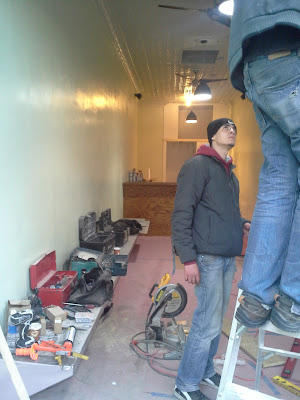 Posted by Clarkson FlatBed at 9:56 AM

I spoke to Kola yesterday and got a good look at the interior which is shaping up very nicely. He did say D'amico coffee. Also Bagel Hole bagels, Blue Sky Muffins and I forget where the fresh croissants are coming from but all sounded good and well thought out!

Also noticed some serious exterior work going on to the former Papa & Sons location. Any word on what exactly the workers meant by gourmet deli?

Hooray!! And Blue Sky muffins is a giant giant bonus.

being and becoming said...

This is great news! And by great I mean I may have to walk to that other train station just to have this place on my way. Thanks Q for adding some pre-holiday excitement.

such good news thanks

I had never heard of D'Amico coffee, but after some research, I'm excited! For those who are interested: http://southbrooklynpost.com/2011/07/damico-coffee-court-street/