There's a New Marshal In Town

And he's come for Meytex, finding nothing but the remnants of a once thriving Ghanaian chop shop. 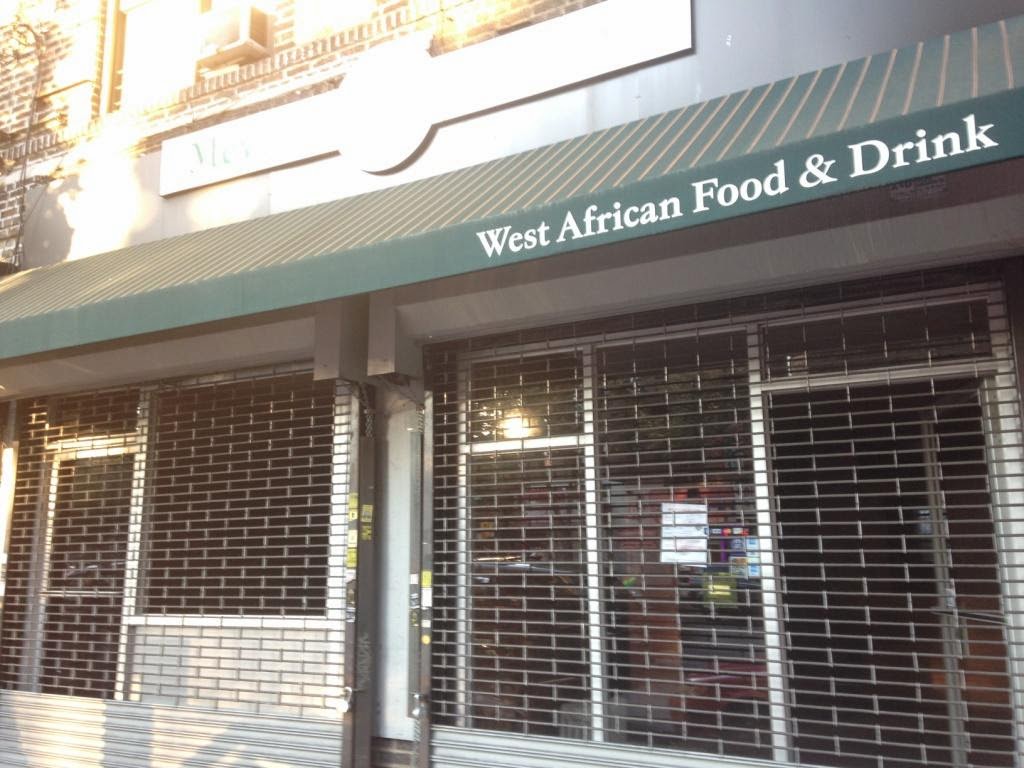 If, like the Q, your Quriosity was piqued by the phrase "city marshal," then read on. I've seen this term used many times, and even seen marshals hanging around outside a place, looking very serious and determined. How do I know they were marshals? It was tough. But the word "marshal" written in large letters on their t-shirts and jackets gave it away. In bold, you can even tell where those marshals are from. You may have had reason to get to know NYC Marshal's up close and personal if you had your car towed for failure to pay tickets. If you didn't pony up the dough, the Marshal's sold it at auction and pocketed 5% of the money. That's right. They got a piece of the action. Deary me I had no idea.

They do all kinds of stuff, like evicting people from apartments and seizing property to pay off debts. In the case of Meytex it could well be that the restaurant owed a bunch of money to the landlord, who won a case against the establishment's proprietor, who, it would appear from the notice taped to the door, was using a fake name. If you were said landlord, you could then "hire" the Marshals to conduct the seizure. They would then sell off stuff til your judgment amount was reached AND take a cut of the earnings. You would of course also have payed them directly for their services. Nice, but weird, work if you can get it. They're empowered to garnish your paycheck as well. Oh, and the Mayor appoints these guys - all of them. Oh, and you shouldn't go around impersonating one. That's apparently illegal, despite the ease with which you could recreate the shirt and jacket.

In other words, in the case of CITY marshals, we've kinda outsourced the dirty work of enforcing Civil Court judgments. They're not actually City employees, rather appointed public officials. Who, as I've noted, get a cut of the action.

Now. The U.S. Marshals. You know all about them from honorary U.S. Marshal John Walsh of America's Most Wanted. If you need a good chuckle 'n' head-scratch, check out the puff piece they produced on themselves below. I'm particularly fond of the bit where Walsh says that you've probably seen the U.S. Marshals portrayed in countless films, and yes, those films "truly reflect the real life fortitude and integrity of the men and women who wear this star." So despite the fact that most of those films are fictions, and none of the films is actually named, you can rest assured that the portrayal of the U.S. Marshals is the real thing -  pretty much anytime you see a movie. Perhaps the U.S. Marshals are monitoring the scripts?

Posted by Clarkson FlatBed at 11:10 PM

It looks to me as if the AKA refers to the place name, not the wonderful Mercy, who has always gone by her name. My impression is that nearly everyone who has met Mercy has liked her(I certainly do), and it's sad that rising rents have driven her unique place from the neighborhood. Please be more careful about casting aspersions on good people.

Adrian: No aspersions were cast. I merely repeated was on the sign, and was careful not to be specific about whether the fictitious name applied to the person or the establishment.

I was being as careful as I deemed warranted, but I'm glad to hear someone speak up for her. I trust you know the situation well enough to defend her in the allegation? Perhaps she's available to defend herself? Please let her know she can contact me if she has a) relocated or b) been railroaded. It's an important story either way.

If in fact it was the high rent that led to her leaving, rather than any illegal deed on her part, I would certainly like to share that. But let's be careful, too, not to blame the landlord until we know what happened. That can only feed the hysteria surrounding the current maddening situation of rising commercial rents. In fact, the new merchant's association is hosting a forum, led by the Pratt Area Community Council, on the rights of commercial tenants TONIGHT at Tafari Cafe.

I'd also like to point out that the Marshal's are only called in when a person loses a civil case. That's not to say that there isn't another side to the story.

Someone knowledgeable mentioned to me recently that many storefronts along Flatbush are coming up on the end of their leases - several started their leases around the same time, and many will have to renegotiate in the next year or so. Chances are that landlords will raise rents and we'll probably see a lot of turnover and perhaps more seizures like this.

It seems to me that the only AKA on that form refers to the address - 64 Lincoln Rd is also known as 543-545 Flatbush Avenue. Nothing about Ms. Arhin at all. But, yeah, if it got to this point, that probably means she either hadn't been paying her rent for some time or her lease was up and she'd refused to vacate the premises (and probably also wasn't paying rent). A shame either way.

Therefore, the "fictitious name" applies to neither the person nor the establishment, and isn't fictitious at all - many corner properties have two address. For example 11 Maple St. (colloquially A/K/A the Ray's Candy Store building) is also officially A/K/A 547-557 Flatbush Ave AND 1-13 Maple St. Just covering all the bases.

"who, it would appear from the notice taped to the door, was using a fake name." "No aspersions were case." Neither of these things are true. Own up to sloppy journalism when you commit it. And, once more, it's "chop bar," not "chop shop," which last time I checked was a place devoted to deconstructing stolen cars.

some notes for Adrian:

second, i'm not a journalist.

third, i've never met her and merely repeated what was on the door. the word "who" could have referred to a person or the shop, and frankly i don't give a damn which. (see note #2)

fourth, "chop shop" and "chop bar" are used interchangeably. (look it up).

for a free resource, some of you jerks are awfully tough on the old man!