Beating Back a New Neighborhood Name

What, they thought we wouldn't notice? 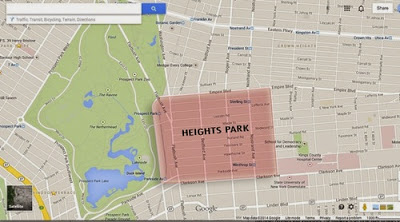 Curbed points out today that there's been a rethink over whether the neighborhood should be renamed. I've heard through the years that certain neighborhood names came from real estate interests, rather than the more organic grassroots approach. The below is a picture of a new "townhouse" with rentals that's going up on Hawthorne btw Rogers and Nostrand. Originally, it was touted as part of a "new" neighborhood called "Heights Park," map above.

Among others, the Q protested loudly when Residential Development Group tried to rename our neighborhood thusly:

"A new neighborhood is actually taking shape in Prospect Lefferts Gardens and becoming known in inner circles as 'Heights Park.'"

How much would you pay for the above? $1.6 million and it's yours, with an owner triplex and rentals that will fetch more than $4,000 for the both, once again proving if you HAVE the money in hand, you can live nearly for free.

Even the Q prefers PLG to Heights Park. Still, Lefferts Gardens if you please.
Posted by Clarkson FlatBed at 12:55 PM

Only in these mysterious "inner circles" can the laws of physics be violated, with two things occupying the same space at the same time.

"A new neighborhood is actually taking shape in Prospect Lefferts Gardens and becoming known in inner circles as 'Heights Park.'"

Something tells me a better choice is "Commanding Heights Park."

That, I presume, would be the top few floors of 626, but it really isn't much of a park.

Brownstoner posted photos of the interior this morning. I thought the exterior design was so incredibly heinous, until I saw how horribly laid out and cheaply done the interior is. I'm shocked at the price tag for this character-less construction.

Doesn't "Park Heights" have a much better ring to it? They could have at least tried something that rolls off the tongue a bit better.

To get a sense, take a look at the lovely styrofoam siding peeling off the outside walls of the abomination at Bedford and Parkside.

When those came to market, about 7 years ago, they were priced at $700,000 and we all thought they were start raving mad. They didn't get that price, dropped it $100K, then with the crash decided to go rental. The place has been full of recent college grads ever since. Not to knock them of course, they're doing what they gotta do to survive in NYC. Now they'd easily fetch over $1 million if they go back to market.

"Doesn't "Park Heights" have a much better ring to it? They could have at least tried something that rolls off the tongue a bit better".

If you know your history "Melrose Hall dungeons" also has a nice ring to it. It would be especially apt if some developer wanted to build a new neighborhood of underground bunkers

I'm still pushing for AESOPP...Area East and South of Prospect Park.
And remember, you read it in The Q !

The "Heights Park" block isn't in the Historic District (despite the efforts of those of us who worked on this issue back in the '70s) but common sense, and the widespread ridicule to which the developers were subject, did an adequate job.

I love opening up this can of worms every so often! It's partly why I started this dang blog. I wanted to point out that people are often more grouped by their train than any neighborhood name. Like, do people living at 123 on the Park really feel like they live in the same neighborhood as the Victorians of Prospect Park South? They probably feel more aligned with me over on Clarkson.

Whenever I tell people I live in Lefferts Gardens, or Lefferts, and they have a vague sense of Brooklyn, they know what I mean (now). When I used to say PLG I'd get blank stares.

The folks in the historic district might want to include the rest of us in their neighborhood, but they're Holland to my Netherlands. Know w'd'mean? But we're all part of the Flatbush Federation.

I dunno, i feel like there's a great divide around here between the West of Flatbush ave and the East of Flatbush ave people. I went to a party over on Church and Ocean the other day (99% artists in their 20's) and when i mentioned my boyfriend lives down Church on E 31st St someone acted like it was WAAAAAAAAAAAAY out there, like in the boonies. But in reality...it's only about a 10 minute walk...i just think newcomers to PPS like Ocean Avenuers and probably 123 on the Parkers probably feel no desire/reason to go east past Flatbush ave. Which is odd to me especially because the large pre-war buildings we live in are identical. Instead they'd rather identify themselves more with Ditmas. anyway that's my working theory

I agree about that divide. It seems to me that people here often go from east to west, so someone like me, living on a Bedford–Rogers block will know the Bedford–Flatbush block better than someone on that block would know mine. I've had the experience of people living on the W. side of Flatbush, or on Ocean, having to use Google Maps to find my Midwood II house. When I first moved here in 1974 Ocean Avenue wasn't even considered by PLGNA to be part of Prospect Lefferts Gardens, which was strange since proximity to the park was always one of the neighborhood's greatest attractions. Ocean was added to the PLG map a year or two later.