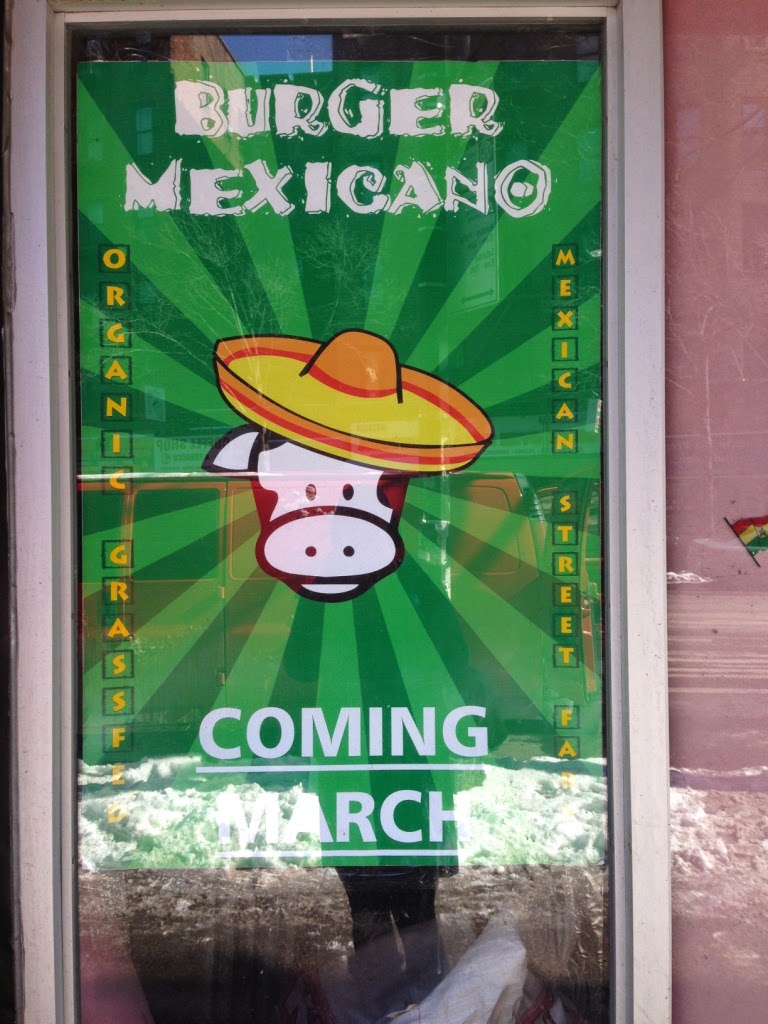 
From Meytex to Tex-Mex. Another Jim Mamary production.

Speaking of which, the Q doesn't eat out much, but there I was last week enjoying that comfy chill at Bluebird. It's very civilized, nice mix of folks. And the fact that there's a weird social club pool hall vibe up front makes you feel like you're in on a secret. The food's a nice mix, but I still miss fries.

Frankly though, I don't like when restaurants use the animal you're going to eat to beckon you (the cow, not bluebird). Can you imagine a Cannibal Bistro with a marquis that has animated people smiling at you from the big boiling cauldron? Well, at least not at the upscale Cannibal joints. Actually, the joints are the best part.

Posted by Clarkson FlatBed at 12:42 PM

Ugh. That font! It's the mexican restaurant version of Comic Sans.

I think after Pacifico, and worse Enduro Jim Mammary should be forever banned from attempting Mexican food. Mexican burgers? That sounds even more inedible than the food at Enduro. Bluebird is great, some of his other places are too, makes you wonder why he would go with this concept. What do we have to do to get a regular taco spot around here?

The plan is not Mexican burgers, people. He's basically carrying over the Mexican menu items and burgers from LPT to the new place. Apparently, almost everyone ordered either a burger or the Mexican stuff, so that's what they're moving over with.

If this is the same crew as LPT, I hope they step up their burger game quite a bit. I really wanted to like LPT's burgers since they were the only game in town, and gave them several chances...but was disappointed every time by bland, underseasoned meat cooked past my medium rare order, with toppings just kind of thrown on the plate. As Anon @ 2:51 mentioned, Bluebird's food has been solid so far, so here's hoping they'll continue to move on and up.

Concur re the font and having a cute cow mascot for a joint selling dead cow. And top it off with a sombrero. Wow. The only thing left out is maracas.
Please put away the clip art logo app and hire a good designer, Jim.

Hilarious! Amateur graphics looks like a parody of a tacky fast food joint. Cant wait to see the uniforms!

Maybe this is some kind of inside joke, similar to the use of "dj oyster" in the original liquor permit applications, etc. for Bluebird. If this is for real, I just don't get it. LPT went through what 4 reinventions along the way? Enduro was absolutely horrible, the bbq place that followed it even worse, and I honestly can't even remember what Fly Fish or whatever it was called was all about. The final version of LPT certainly developed a following as a bar, but I don't think the food was exactly packing them in. Moving the staff over from LPT is fantastic, but this was a chance to start fresh with a fresh concept, seems like a real missed opportunity. No doubt if it has a rocky first few months it will re open as some completely different cuisine, possibly Irish - Mexican. Haggis Tacos for all!

but will they have good french fries? bluebird is a staunchly french fry free zone

Bob, this is already a better concept than "Burger Mexicana".

I have to admit that I do greatly miss the nachos from Enduro/LPT.

Many years ago Enduro's burgers used to be good, but something happened, around about the time they changed the name to LPT for the whole thing.