No, not that race. For City Council in the 40th, against incumbent Mathieu Eugene.

Okay, so he's not running for reelection til 2017. But Mathieu should already be running scared. A likable, politically savvy newcomer has announced plans to run. Brian Cunningham lives in Flatbush and has all the trappings of a potential contender for political office. He's experienced in politics and government, he's cute, dresses nicely. I've met him a few times and I have no idea what sort of councilperson he'd be (yet) but I'm sure we'll all have plenty of time to get to know him before Primary Day a year and a half from now. Declaring early is a good idea though. This way when you see him around you can know you're talking to a candidate and ask all those questions you're dying to ask now. And I expect to see him around a hell of a lot more than the guy with the gig and the nearly $150K salary who actually lives in Canarsie and can't be bothered to show up or send a rep at CB9 meetings. Unless he's touting something like his new trash cans that were payed for by some of his discretionary money. Btw I shook his hand and thanked him for them.

So when I say the race has tightened, I mean the odds are already good that Brian can beat Mathieu and nobody knows Brian yet. As I see it, Brian needs support from a few key places and he's a gimme. If he can nail down support from 4 of 6 of Yvette Clarke, Diana Richardson, Kevin Parker, Jesse Hamilton and Eric Adams and Jumaane Williams that would pull him even at least. A couple unions go his way and you're golden. Unless other people run, then it's gonna be tougher. Another reason to announce early and try to raise money and dissuade others.

Here's his page with all the upbeat tidbits. What's he look like? 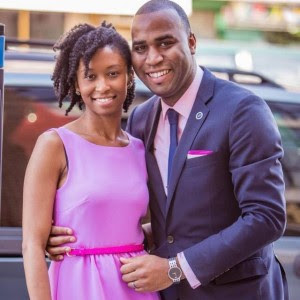 Why, you might ask, am I posting the picture with his wife Stephanie? Couple reasons. First, in order for a dude to get married he has to impress his to-be wife, right? She's attractive, smart, works at the Brooklyn Museum. She picked him, so maybe he's not all bad. I like married guys, at least until they end up as front page news for being not-such-great married guys. But let's assume for the moment that Brian's one of the good ones. She chose him, that's a plus. Sexist of me? Nah. Just practical.

Second, of all the places in the world to run into Brian, I ran into him and Stephanie last summer in Manchester, VT at the estate of Robert Todd Lincoln, called Hildene. They were also visiting the bizarre Pullman Car museumy situation they have there, where you find out that Robert Todd Lincoln really didn't do much with his life other than cash in on his daddy's name and become head of Pullman, a position that was handed to him for his political connections. The story of Pullman Porters, however, is a great window onto the world of post-emancipation racial economics, or put another way, how to turn slaves into indentured servants and make it look like you're a racial progressive, all the while only further stereotyping and belittling an entire group of people and calling every last one of them "George" or "Boy." Also the idea that train travel on Pullman sleepers could give you an opportunity to live like the upper crust, if only for a couple thousand miles, is bizarre in itself. Pullman Porters gave you a manservant for a few days, and quite possibly the closest thing to haute cuisine you could expect on wheels.

As bad as Pullman Porters had it, they were considered the top of the pops for black men. A small but steady wage, a decent uniform, seeing the country. Truth be told MOST Americans had shitty jobs at little pay during the dawn of the Industrial Age. Check out the coal miners and migrant farmers for starters. It was a time of great income discrepancy and fast-moving technological achievement and racial and political upheaval. How very very different from today. Must have been craaaaaazzzzy!

Posted by Clarkson FlatBed at 10:51 PM

His website is dead - domain empty. His facebook is deleted. Is he gone? What's happening? It worries me that I Google his name and it's only link 8 that gets me a Twitter page - everything else is defaulted and gone.

He's still in. More soon, talking to him tomorrow.