As you well know by now, the Q is drawn to conflict. And what bigger, badder, more consequential conflict can we Americans call ours than the looming Trump vs Clinton smackdown?

The Q's in Downtown Los Angeles at this moment, the NPR's and Democracy Now pundits still ringing in his years from my yester-eve block by block LAX to hotel ride through residential L.A. Through the poorest low-income California-style housing projects and South Central liquor store corners through middle class nabes and decrepit art deco buildings, then out for tacos in East LA (it's like the old Fifth Avenue in Brooklyn, with better food), the remarkable densely populated homeless of Skid Row...then the gleaming office towers and water plaza which, I swear to god, is built directly over another plaza/street that's all trucks and homeless encampment. There's so much to behold in this town that has nothing to do with Hollywood or beaches. I highly doubt I'll see much of either on this visit. Did I mention there are two world-class modern art museums within two blocks of where I'm sitting right now? The amount of luxury housing being built down here is staggering to anyone who remembers the OLD downtown. Which, to a certain degree, is still here, just being pressed out from the inner core like a mini-Big-Bang. 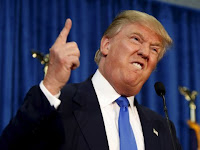 From this strange unstable perch the Q is more than ready to say "Bring It On." Trump defines a certain macho bravado that speaks to a certain American ethos. He brays and pontificates like a spray-tanned Mussolini. He's been bankrupt a hundred times but claims to be adept at "The Art of the Deal." What's more American than THAT? And he's prepared to make the biggest deal of all. Give me four years and I'll turn America back into the bright shiny Casino on the Hill. Or, conversely, we can just declare bankruptcy and start over. He didn't just "win" yesterday. He clobbered his opponents, weak-spirited and Trump-blind as they are, and he will waltz to the nomination. He's already changed his demeanor, slightly, in a pivot away from making a BIG impression and swallowing the anti-government vote. He's now prepared to set his sights on middle America - he will garner many Democratic votes along the way, and anyone who does not like the fact of a black or woman president - you know who you are! Yes, maybe it's sad, but this is how democracy works. Identity politics may get a bad rap, but gee whiz did you really think anyone pays attention to issues? Most Americans can't name a SINGLE Supreme Court Justice. Not one. And while Trump may not be who they ARE, it's who they WANT TO BE. Ask any Power Ball player who, while waiting in an absurdly long line to play, will actually discuss rationally the relative merits of taking a lump sum or an annuity.

The Q likes Hillary. Always has. You have to be super-duper resilient to contend with the nonsense heaved at her through the years. From the backlash about "Tammy Wynette" to her husband's predilection for, um, cigars, to a constant and unrelenting Republican barrage of non-issues - none of which has landed her in real trouble, by the way - and even a well-reasoned attack from the Left. I don't care for her hawkish politicies - she needs to heed the lessons of Iraq and Libya. Frankly though, I have yet to hear a single "right" approach to any of the messiness in the world. My one request is that we just not make things worse like we always do. But let's face it, she's our nominee. And she's been around so long people seem to have forgotten she's...a woman. Folks, there's an actual chance that a woman might hold the most powerful position on the planet. She's worn pants so long that it's easy to forget, especially with Trump clowning about in his remarkably unflattering suits. In fairness, since I posted that Trump picture, there's Hillary looking unhinged.

To the issues that matter most in OUR neighborhood, it's clear to me the Democrat will do less harm. But it's not clear at all that in matters affectively low income people of color that Hillary is producing anything substantive, beyond mimicking some of the #BlackLivesMatter mantras. I will say that Bernie's presence and popularity has made her take a second look at how she's perceived by the black intelligentsia and activists. Ta-Nehisi Coates and Michelle Alexander have made it clear that Clinton was way slow to recognize the longterm harm caused by mass incarceration of black men that gained steam under Clinton I. (Yes I know calling them Clinton I and II isn't the same as the generational Bush I and II, but so what?) The sad fact of the matter is that Fear has always driven racial politics in this country, and the zeitgeist mindset in the late '80s and through the '90s was "get 'em off the streets by any means necessary."

It sickens me to think I was sleepwalking through much of that era, wrongheaded on zillions of issues. That crack was somehow different from cocaine (I tried the latter, not the former, and had I gotten hooked, it would have been  a health issue not criminal behavior). That gangs somehow popped up out of nowhere simply to terrorize. That the L.A. riots were about Rodney King, rather than sparked by it. That O.J. was not about O.J. That "Broken Windows" had an ugly side. That profiling was not just unconstitutional - that it fed existing inequalities and bred hopelessness. That schools had become more segregated than ever, that blacks were behind in net work 10 to 1, that parents have to give their kids "the talk" about how to not get shot by cops. And that many whites were the joining the upper class without so much as a day's hard labor, due to the largest transfer of wealth in world history, only to help exacerbate the divide between classes, even as reparations remained a non-starter. That the war on terror was also a war on liberty itself. That war, wherever, only breeds more war, rarely-if-ever longterm reconciliation.

And all the while, I called myself a liberal. Liberal what, exactly?

Ah hell, here's the greatest and most hilarious sendup of Donald J. Drumpf you're likely to see.

Posted by Clarkson FlatBed at 2:52 PM

What is this blog even about anymore? I used to come here for news around the neighborhood; now it is just the mad ravings of a pissed off CB member.

I dunno, you tell me? What's it about? I'm in L.A. working. For neighborhood news, ask Seth Kaplan or go to the Facebook page. I do a pretty good job of keeping up with the closings and openings, if that's what you mean. But I'll slit my wrists with jerk chicken bones the day I become your go-to news source, the kind I think you mean anyway. Let's see...selective, curated, and when I have the time. That's my motto!