On Flatbush: The Beat Goes On

Some sadness AND gladness surround the expansion of Erv's on Beekman Place. The Q reported many moons ago of the Erv's/Laundry/99centstore building's changing of hands nearly two years ago. Erv's, the "boutique" Cocktail Bar of Beek, has since become a fabulously well-beloved drinkery despite its dinky size. But that was always meant to be temporary, or at the very least a toe-dip before Erv's expanded. Why? Because Erv's owners and building owners are one and the same. We're trusting, hoping, that fairness and due process were involved in the lost of lease. If otherwise, please comment. 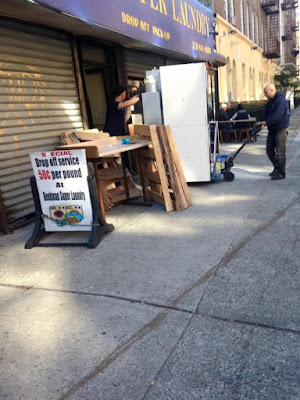 Don't know 'bout you, but I remember every single laundry I've ever called MY laundry. In NYC the phenomenon of Laundromat has led to marriages, divorces, fights and lots and lots and lots of clean clothes. This one will be surely missed by its regulars, but Erv's can now grow into its adulthood. The Q wishes Erv (and the owner's father of the same name) well, and perhaps a kitchen? The 99 cent store is not far behind, so stock up on your bric a brac and sundry staples.

And now to the Q's quandary. Long a fan of Melany's Dominican joint at Lenox and Flatbush, and long a fan of El Castillo de Jagua on the Upper Flabenue near 7th Avenue - what to do? For awhile I believe I'll be splitting my pesos between the two. Thx Otto for the photo of Castillo's new shop on the Lower Flab tween Winthrop and Hawthorne. 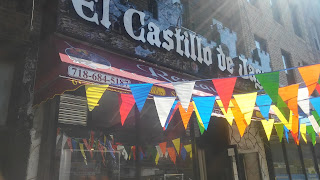 Even Lower on the Flab lose the flab by attending some killer classes at the The Flatbush Loft at 859 Flatbush's 3rd Floor (Martense). The Q was a bit overwhelmed by the ladies pictured on the website doing their thing, but he is too old and too married to make note of it. But I thought I'd share this picture below and note that Conga Guy is feeling pretty good about his choice of instrument right now.

There's a buttload of great fitness and yoga stuff happening in the 'hood, from Nostrand to Ocean and everywhere in between. You have no excuse. None. Nada. From your flab to my flab to God's ears...

One last picture to inspire or horrify the yoga nerd in you: 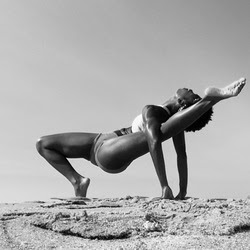 Posted by Clarkson FlatBed at 10:17 AM

My understanding is that the owner of the laundromat is going to be part owner in Erv's expansion and that everything is nice and above board.

Super bummed. Now I have to go AROUND the corner. And no more dollar store!? Damn.