Let's Get That Protected Bike Lane For Goodness Sake

Please sign this well-conceived petition and plan from your friends at TA to create a protected bike lane btw Empire and GAP, not unlike what happens on the "other" side of the park. I can already here the outrage from drivers at CB9. "Now you want we should go back to HORSE AND BUGGY!" they'll say. Progress is progress. Give us the bike lane, for safety, for sanity, for a reduction in the use of fossil fuels. Whatever your reason, let's go. (The Q;s hunch is that this will start a bargaining process that ends in a two-way lane on the BBG side where there's currently a sidewalk.) 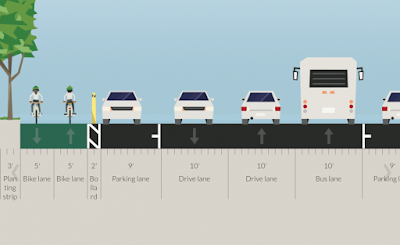 -Flatbush Avenue, between Empire Blvd and Grand Army Plaza, is a non-residential strip that is plagued by speeding vehicles because of an excessively wide roadway. This puts people at risk as they walk and bike to Prospect Park, the Prospect Park Zoo, the Brooklyn Botanic Gardens and more.

--To ensure vehicles do not race above the speed limit, we are requesting traffic calming along this dangerous route by means of slightly narrowing the road with a two-way protected bicycle path.

--For southbound cyclists who wish to ride to Crown Heights, Prospect Lefferts Gardens, Flatbush, and other neighborhoods east of the park, the only safe option currently available from Grand Army Plaza is an unnecessarily long loop through Prospect Park, which also closes late at night. Flatbush Avenue could be used to create a more direct route that brings safety to all road users.

--Some cyclists already ride up and down Flatbush Avenue between Grand Army Plaza and Empire Blvd. However, many do so using the sidewalk because the vehicular speeds pose too much danger. When cyclists are on the sidewalk, it is a safety concern for pedestrians. A two-way protected path would those who walk, those who bike, and those who drive to all have safer passage.

--A protected bike lane was already installed on the affluent western side of Prospect Park. This change yielded reductions in speeding, fewer injuries & crashes, and drastically lowered the number of bikes riding on the sidewalk. The same should now be done for the eastern side of the park.
Posted by Clarkson FlatBed at 10:49 AM

DOT is already studying a bike lane on the Botanical Garden side of Flatbush, and have a long term goal to swing it down Ocean or Flatbush and up Parkside.

A dedicated bike lane is much needed and long overdue! Dare I say that there needs to be a speed/red light camera on that stretch of Flatbush too.

Same poster as before back to clarify.
DOT's working plan would repair the sidewalk on that side and install a bike lane there, leaving the traffic pattern as is for now. There would be bike crossings at empire and grand army to connect to the grand army bike lanes and an ocean ave or Flatbush bike lane to be designed which would be part of a future two way ring around the park.

I don't know of any other traffic changes to Flatbush on that stretch, but rest assured DOT is not happy with the state of Flatbush in general from Grand Army to Parkside.

This cyclist thinks it would be great if any protected lane added between Grand Army & Empire also be extended all the way to Parkside since I live just off that stretch and it's currently an apocalypticly dangerous situation when taken by bike - And any business-dense should be friendly to bikes, not apocalyptic. But I can understand there being a lot of pushback at such a plan as the avenue south of Empire is more narrow and sees heavy car use. If I had my way, the west side of the street would be a two-way protected curbside lane and parking would be removed from that side.

I hears ya. However, a workable solution would be to extend the bikelane over to Bedford somehow, since there's already a lane. I don't see Flatbush below Empire going bike-friendly anytime soon. Unless...(pause) they erect and elevated bike lane!!!!!!

Of course the idea of an elevated bike lane makes too much sense to happen, but a more realistic solution to pedestrian safety and increased traffic flow would be to block of the sidewalk road access around the intersections and build pedestrian tunnels or bridges at major arteries i.e. Parkside/Flatbush, Ocean/Parkside, Empire/Flatbush, Caton and Church. Other cities have done it and I know it would take away some of the scenic views, but only more people are going to move here and the pedestrian car traffic is only going to get worse.

I love bike lanes, and think PLG deserves it just as much as Park Slope does, but I would only sign this petition if it also called for reduction in on-street parking spots, to allow for loading-and-unloading only spots. Bottlenecks with double parked cars and trucks already contribute to much traffic (not just in PLG but all over NYC). Time for NYC to realize that bike lanes and pedestrian plazas need to come with smarter traffic flow designs.

Double parking problems can be solved with enforcement. The dollar vans also cause major traffic tie-ups, coming to dead stops in the middle of the street to load/unload.

How realistic is enforcing standing vehicles choking up traffic, which in turn, causes higher emissions?

One other issue about the dollar vans is they are no longer just vans but the double wide whatever you call them. They are wider than an MTA bus and that is not an exaggeration. This summer riding many times up through the Atlantic Barclays area, just a few of these vehicles one on top of another stopping to let people on and off would hem shit up so bad. It was mind boggling to me that NYPD lets them get away with it.

As for the dollar "vans" -> buses, I agree. It's ridiculous. Did TL&C authorize the larger vehicles, or did the operators just decide on their own to increase capacity? I am no expert, but they seem large enough to require a special operators license, too.

Maybe someone at the 71st is listening: this morning, during a quick over-and-back to Park Slope around 8AM, I saw three dollar vans pulled over by the cops (plus one passenger car). I don't know the reasons for the stops but I can't recall a morning with as much enforcement. Here's hoping it's a trend and not just a one-off...