Some days, at certain moments in the news cycle, you wake up thinking you could be surprised by nothing short of an alien abduction. Yet, as the Q sits over his Bustello, he nearly spits the sludgy jump-juice across the room as he reads of the huge (like, really really huge) nightclub opening up INSIDE the new Thomas Anderson built apartments around the Q/B/S Prospect Park station. Now, don't get me wrong. I'm a veteran of all things NYC and I was a hipster too once. (Some have tried to reassure me I wasn't, but I dressed like an old Jewish lady version of Grunge and played in a "never sell-out" indie rock band with two women friends from college, which I guess made them rock-n-roll coeds? and since we actually put out records we weren't wannabes so we weren't hipsters, but I kinda think anyone aspiring to the zeitgeist is a hipster so now I'm just an aging hipster I figure) Cool, weird, and even too-big-too-succeed utopian visionary experiments are what makes NYC the cultural capital of the world, right? So why should I be surprised that a late-night DJ-culture venue is opening in the middle of a market-rate adventure known as the Lincoln Apartments? Lest you think I'm joking, there's a video to prove it.

To those too old to get it, read the mission (below), and tell me you can't reach back into your creaky memory to find moments in your youth you spent flirting and shaking ass in a big trippy place where you felt free, young and uninhibited. SONIC JUNGLE indeed. Before you dismiss it out-of-hand, as many outspoken elected officials did when a rave was announced for the old Bedford-Union Armory awhile back, why don't we wait and see what happens? With proper soundproofing and security this could be a tremendously fun place for our little ones to unwind, mate and create future beings to inhabit the earth.

The Sonic Jungle is a carefully curated Cultural Oasis, rooted in environmental and social impact, for the creative and the curious of New York City.

In early 2015, brothers Andrew and David Goldin identified a missing link in the sustainability movement: the human connection to the power of nature, especially in our increasingly urban and technology-driven world. The Goldin brothers, passionate about environmental impact and holistic living, sought to bring nature back into people's lives.
Andrew, a wellness and health professional, and David, an artist and designer, believe that reconnecting humans to nature begins with helping said humans to be their healthiest, strongest, and best selves. Through the prioritization of natural wellness, accessibility to music and art from around the globe, and exposure to eco-technology, people can collaborate, learn, and have fun while imaging a healthier planet. The Sonic Jungle is a playground where mental and physical senses are harnessed for impact.
In the winter and spring of 2017, The Sonic Jungle will produce four Pop-Up events in a newly built 44,000 sq ft concrete canvas, located in Brooklyn's beautiful Lefferts Gardens. The event series will showcase music, art, wellness, and eco-technology as catalysts for social impact, as well as the power of nature as a healer, nourisher, stimulant, and inspirational force that sustains humanity. It will feature four floors of live performances, meditation and healing lounges, art galleries and installations, interactive technology VR experiences, an herbal apothecary, film screenings, and all-night dancing.

Oh, and get your tickets now, if you want to check out one of the big "pre-opening" parties. Honestly, I had to check three times to make sure it wasn't April 1 today. Just another kooky moment in contemporary NYC, before the fall, or the rise, of a terrible or beautiful new era. 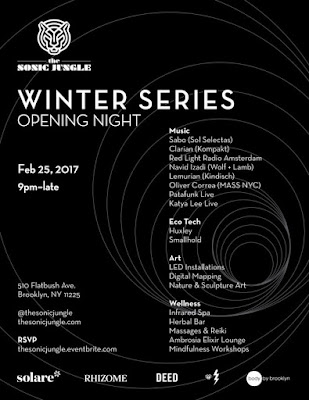 Posted by Clarkson FlatBed at 11:20 AM

Also had to do a few double takes here, crazy!

So after digging a little out of curiosity, this appears to be a pop-up event. Meaning the space is rented out for this crazy event, but all signs point towards a one time event. Seems to me a profitable rental opportunity for owner by some events planners into the raw space as the building continues to look for a more permanent lessee.

Even as a pop-up though....not something I ever expected to happen on this corner...

Not sure what digging you did, Anon. The pop-ups are until they build out the space. They open properly in 2018, which for those in disbelief, is next year.

Where doe it says this thing is permeant? It looks like a short term thing to me too?

Ugh - just focus on finishing this damn building. I'm watching giant 80 story oligarch towers go up faster than this goofy little building on Lincoln road. What have they got, like four guys working on this entire building?

Quit raving and get back to work! I want my damn sidewalk back.

That mission statement is a real hoot. Good to have it out there in advance so that when they get ticketed as a nuisance they can say, "We're not making too much noise. We're utilizing eco-technology to prioritize natural wellness!"

Uh-huh. Just shut up and dance.

They won't bother anyone. Let the kids dance old timer!

Ah. It's just for the four shows. They seem to be using the parking garage before it fills up!