The Townsfolk Are Restless, Jesse! 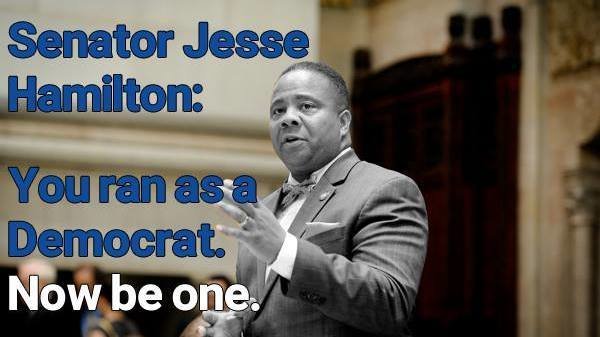 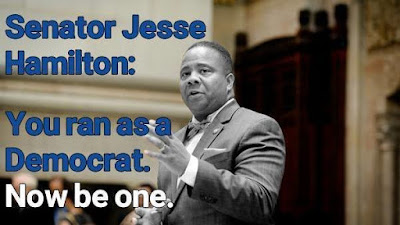 Seems the awakened electorate has grabbed its pitchforks! The oft-ignored State Senate has become the latest fault line. Jesse Hamilton is beginning to feel the heat from angry constituents (he's got a chunk of Crown Heights, Lefferts, Park Slope, Sunset Park) who are not amused that he's been spotted holding hands with the Upstate Senate Republicans. You can read and/or sign the petition that's going around if you like. Do remember though that the IDC is a bit of a parliamentary ploy, and not as simple to pigeonhole as Democrats Gone Bad (DGB). Still, anyone who hears about his caucusing with Republicans instantly breaks out in hives. It's a condition, and with the current allergens in the air, it's only gonna get worse.

The text of the petition is pasted below:

Sen. Hamilton was voted in as a Democrat and he needs to act like one! In November 2016, he joined the Independent Democratic Conference (IDC), a group of NY State Senators elected as Democrats but aligned with Republicans. They allow Republicans to BLOCK:
As voters in his district, we demand that Jesse Hamilton immediately return to the Democratic Caucus or resign from office to allow for a special election.
Posted by Clarkson FlatBed at 3:33 PM

According to a quote from the Village Voice about an event last night, Hamilton believes that the protesters he's seeing are just gentrifiers and don't represent his "true" constituency. I guess he should go ahead and walk up and down Franklin to stop people and tell them that their votes don't matter.

Trump claims he lost the popular vote due to the presence of millions of illegal aliens on the voting rolls. That might sound far-fetched, till you examine the requirements for voting.

And then there's this:

Check out the existing voter registration form for NY:
http://www.elections.ny.gov/NYSBOE/download/voting/voteform.pdf

The rules clearly state that if you don't have a valid ID, that's okay. Check the box to register as a Democrat and there's nothing to worry about. Then just sign on the dotted line and attest that you are a lawful citizen. Oh sure, there's some nonsense about possible penalties for lying. But, penalties here in this "sanctuary city"? Not likely. And that's assuming someone comes looking, which ain't gonna happen.

Cut to the chase. Would illegal immigrants in PLG want to vote? Yes. Who would they want to vote for? Hmmm. Candidates who promise to help immigrants. Soooo, which candidate or office-holder might that be? Mathieu Eugene comes to mind. As do most of the elected officials in Brooklyn.

Yvette Clarke, the woman who lied when she claimed she'd graduated from college, surely wouldn't object to receiving votes from people who lied about their citizenship. Right?

The local pols are elected with a handful of votes. These local winners have a major bias in favor of immigrants of all kinds. Soooo, it should surprise no one if illegal immigrants have made their way onto the voting rolls -- in NY and California and a few other states. In that scenario it's quite possible Trump was correct about the presidential voting.

Yes it's possible Anon 2/20; it's also possible that all the oxygen molecules in a room might randomly move out and you'd suffocate. In the REAL world there appear to have been a really tiny number of fraudulent votes in the last election, most of them cast for Trump.

Bob Marvin, nope. Atmospheric gases don't act as you've described. But humans do act as I've described. Illegal immigrants have the means, motive and opportunity to register to vote.

I'd bet that Mathieu Eugene counts on illegal immigrants re-electing him.

This is an awesome post.Really very informative and creative contents.These concept is a good way to enhance the knowledge.I like it and help me to development very well.Thank you for this brief explanation and very nice information.Well, got a good knowledge.

To be honest, I hope that DT's comments provoke a full investigation at the highest level. Now that he's lent credence to the fraud claims, we'd better nail this before it becomes way bigger - like at the next close election. I do think the nail-biter in North Carolina should shut the critics up - they found nearly nuthin'

Much as it pains me to report...DT was elected president of the USA. Every stupid thing he says needs to be parsed and proven, or he really does run the chance of becoming a classic fascist.

@AnonymousFebruary 17, 2017 at 3:32 PM- Re:" I guess he should go ahead and walk up and down Franklin to stop people and tell them that their votes don't matter."