Need a Mission? Bring It All Home To Staten Island

I know, I know. Where to begin? Head down to DC? Try to get stuck in an elevator with Lindsay Graham so you can knee him in the groin? Actually as he was mouthing off last week I realized just how much he looks like the Cowardly Lion. Really quite striking. 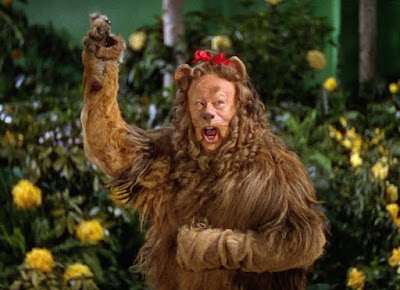 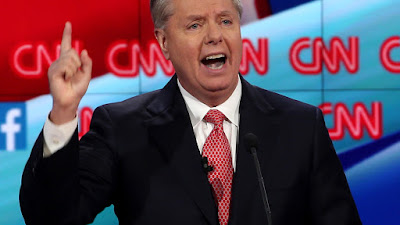 With one bitter political day following another, it's hard to know where to plug in to save the Republic. One thing's for sure though. The Republicans made a deal with the devil (the Southern Strategy) and not surprisingly it came back to haunt the country. To win elections they wooed racists and evangelicals, feeding them the red meat they weren't getting from Washington post-Kennedy-MLK-Johnson. And now the "basket of deplorables" has thoroughly emerged as the dominant force in the never-should-be-called-again Party of Lincoln. More like the Party of Pat Buchanan. Actually Pat and Putin made quite a team in 2016...

From the Q's not-terribly-deep well of wisdom, he offers you a simple, local way to make a big difference. You and I have done our best to break the stranglehold of the Kings County Machine by giving bumbling Mathieu Eugene a run for his money - twice; bolstering the powerhouse truth-teller Diana Richardson past the machine candidate; nearly toppling the hapless Yvette Clarke in a primary, and putting Zell Myrie in a great spot to take the State Senate seat from the shameless turncoat and machine-vestige Jesse Hamilton. Someone asked me recently if this blog was political. What?? Not on your life!!!! Would never, could never, should never! Hey, at least I'm not hiding behind some bogus non-profit...

Here's the two words you need to know if you don't already: MAX ROSE. Mnemonic: Max like "Mad Max" and Rose for, say, "Rose McGowan," the loose-lipped champion and sometimes-distraction of the #MeToo moment. (Actually, you can use McGowan if you want, but I'm going to use my bass player friend Rose, or better yet, Rose Stone, keyboardist and the sister of Sly from the Family Stone.)

Max has a pretty good shot at turning Red Staten (Red Satan? Hmmm) to Blue Satin. Staten. Whatever. You get the idea.

Either Max Rose has the best of consultants or the surest of political instincts, because he is running the kind of positive non-Trump-centric campaign that Dems need in order to win back the bicameral. That's right. NON-Trump-centric. Why? Because everyone who already hates Trump already hates Trump and is likely motivated to vote - the trick is getting them to the polls.

This time out, you can run as lefty as you want as long as you run FOR something, whether health care or immigration reform or economic justice. To win in conservative districts, you can actually take all the positions from the left that you want - but if there's a position that's a tough sell in your district, for GOD'S SAKES don't lead with it!

Because we may have come a long way in this country, but white people have WAY farther to go. And right now even the not-racists are defensive and scared, and that's a recipe for dictatorship. Ever noticed that dictators often emerge when they feel their minority hold on power is crumbling? Bingo. That's how we got here, and in my opinion, it's better to talk about this stuff from a place of strength. Say, Obama in the White House, or Dems in control of at least ONE house of congress.

This is Max. He needs your support. He needs people to help get out the vote and phone bank. And he even has a sliver of South Brooklyn!! C'mon now. Let's get Max in the congress - it's a huge turnaround to change even ONE seat from Red to Blue.

And while I've got you, take a look at the BRILLIANT piece for Andrew Gillum who might actually become governor of the (among others) the rednecks in north Florida. And his new TV Ad is PERFECT. I'm gonna give you both below. So...Don't lose hope friends. You're about to see something this country hasn't seen since...well, 2008!! Go be a part of it.

Posted by Clarkson FlatBed at 4:13 PM

Max Rose and Andrew Gillum, two guys who seem to be good-hearted. Nevertheless, both spouting the same rhetoric that boils down to taxing people with incomes and assets so they can hand the dough over to those who don't have incomes and assets. Same old, same old.

In other words, buying votes with taxpayers' money. Nice work if you can get it.

And it doesn't work.

What works is getting government out of the way of people who know how to make things happen. That's why Amazon will not put its "second" headquarters in NY City, though frankly, it seems to me the real game involves Amazon quietly side-stepping out of the workers' paradise of Seattle. Open the new, then slowly close the old.

In my view, Amazon will go to Dallas.

In other words, to a place that treats businesses well, which is not the goal of Max Rose and Andrew Gillum.

Tim,
Did you really shut down your blog, or is this April Fools Day?

Hmmm. What could be the explanation? A Flatbed ruse? Some deception. Trickery? Or is the message sincere?

Did someone put Flatbed's boss on his case? Sometimes bosses tell employees to knock off the extra-curricular online activities. Especially if, in some roundabout way, the boss feels exposed to some kind of retaliation from the people who don't like the activities in which the employee has been engaged.

Or maybe someone filed a defamation suit naming Flatbed as the defendant. Maybe he was given a choice? A costly legal battle in defense of his rights to speak his mind vs shutting down and the suit going away.

That's what known as a SLAPP suit. Strategic Lawsuit Against Public Participation.

At this point, the situation has the look of a SLAPP suit.

After re-reading the 9/21/18 post "The Q in the Crosshairs" it looks like Flatbed got taken down by his thuggy opponents.

As I said, Flatbed is feeling what Kavanaugh felt after Ford smeared him. Looks like Flatbed has been put in the penalty box by fellow liberal Democrats.

As they say, a conservative is a liberal who got mugged.

Based on his mea culpa, it looks as though black activists circled around him and pulled off a media lynching. Not amazing, Just business as usual. And maybe there was an additional threat in the mix that he's afraid to reveal?

His total acknowledgement of his "offenses" suggests they put a good scare into him. That's when a guy starts thinking of selling his house and moving to a neighborhood occupied by people who don't make life so anxiety-ridden.