Brooklyn's Best Jamaican Beef Patty. There. I said it. 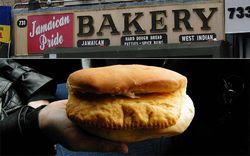 Okay. So we don't have a lot of snooty sammies with roasted red peppers in "Parkside." (that's the name of the neighborhood...get used to it). But hey, if you need to drop $10 for a handcrafted unsatisfying ironically named sandwich on baguette, go to Provisions in Ft. Greene, where all the staff is trendy and the music is Pitchfork approved. If you're not up for that trek, and you've got less than $2 to your name, then stop by Jamaican Pride Bakery on Flatbush btw Parkside and Flatbush. I thought Christie's did 'em right. But this version of the Beef Patty is so juicy, hot and flaky you might need to wash it down with a cold "Ting," the Island stand-in for Mello Yello.

“We use Black Angus beef and fat from the caps of the prime rib,'' said Desmond Patterson, a co-owner. Jamaican Pride's ground beef filling combines plenty of black pepper and Scotch bonnet ??), fresh thyme and allspice (Jamaicans call it pimento), two signature seasonings in Jamaican cooking. It is slightly soupy, like a sloppy Joe. Patties at most New York shops tend to be drier, with the meat pastelike, in the traditional style. (this from the NY Times, so you KNOW it's true.)

If you're carb-loading, be sure to ask for the patty in bread (as in the picture above). Though in my opinion, that's like ordering a hot dog in bun ON rye. As they like to say on Brownstoner: "what do you think?" and "what would you pay?"

Posted by Clarkson FlatBed at 11:59 PM

i beg to differ. there's a haitian place by the 2 train at winthrop with amazing meat patties. they look like pastries and are delicious.

hdaisy, do you mean Immaculee Bakery II? Yes, those are awesome patties. I think they are more like beef croissants in a way. I do sort of prefer the ones at Jamaican Pride because I love how much filling there is. Another good Haitian patty place is the Church Ave Bakery on Church right by Ali's Roti--they have salt cod ones that are amazing.

Yes! I couldn't remember the name and it doesn't show up on Google Maps for some reason. Thanks for the other recs too!