This blogging thang is a trip. Here I thought I had it all figgered out, and y'all got my head spinning so fast I nearly got a malted brain (cabinet brain for those from Rhode Island). I'll try not to dwell on it, but New York is a City of Neighborhoods, and if you don't know which one you're in, well, it can lead to an identity crisis. And friends, that can lead to all manner of DSMIV issues.

We all live in Flatbush - that's a given. If you're not hip to that yet you should probably do a bit of research, since it was the Dutch settlement of Flatbush that set the whole ball a-rollin'. Vlack bos was the actual Dutch town name, and it translates loosely into "Tight Pants." Tight Pants...Flatbush.

Flatbush is roughly bounded by Coney Island Ave, New York Ave, Empire Blvd-Prospect Park and Brooklyn College-Ave H-LIRR-the Junction etc. That's HUGE. Depending on where you draw your borders and where you get your numbers, there are anywhere from 100,000 - 250,000 people living in "Flatbush." That's not a neighborhood. That's bigger than Des Moines! (If for some reason that doesn't impress you, that's merely because you didn't grow up in Ames, Iowa like I did, thinking that Des Moines was, like, massive.)

So one day I'm trolling about I and I run across an article on the Brownstoner about a micro-nabe called Caton Park. Yes, it actually exists, and it's roughly the tree-lined streets directly below the Parade Grounds (or NW Flatbush, I suppose). And frankly, I get it. Once you hit Church, sh#t gets weird. Coney Island Ave is like a dry urban moat. You can't extend your 'hood into the Park. And Caledonia (the new name I just coined for those streets just east of the Parade Grounds) is too densely populated to feel like, er, Caton Park.

All I'm sayin...and I'll admit, it ain't much, is that there is plenty of precedent for people banding together and calling their neighborhood a neighborhood. I'll keep dreaming. And if, while I'm dreaming, I'm in need of some driving lessons, a Notary, some copies, a divorce, and a "Pay-o-Matic" bill paying service, I can always head to the corner of Parkside and Tight Pants: 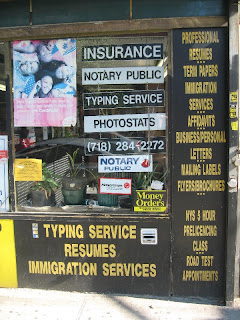 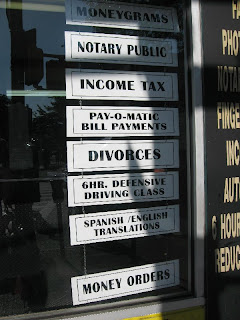 Posted by Clarkson FlatBed at 10:05 PM

So true! We all do live in Flatbush - saying you're from Flatbush is like saying you're from "Downtown" in Manhattan - could be anything below 14th St. Flatbush is one of the original six towns that made up Brooklyn, so its history is nothing to sneeze at. So what's the problem? Why do real estate agents and brokers want to call everything either Ditmas or Prospect Lefferts (check out Corcoran's new Lenox Road condos, "located in Prospect Lefferts Gardens." Not!)? The name Prospect Lefferts Gardens wasn't really used at all until the area was landmarked in 1979 (though Lefferts Manor existed before then), and if you talk to anyone from Brooklyn before then, you'd better say you're from Flatbush or they will have no idea what you're talking about.

You're fron Ames?? Did you know Joey Wilgenbusch?