A neighbor (a real live Italian...from Italy!) and I took a walk with our daughters up to the Parade Ground playground on Sunday morning. Seemed like half of Brooklyn was out playing "football" on the fields, and despite the recent Parade Ground murder, things were festive, though one dad seemed really peeved at the rest of us, maybe for playing with his balls. I mean his kid's balls, which, by the way, the kid wasn't playing with, so what's the big deal? (and if you went all double-entendre with that last couple of sentences, then you are one immature Caledonian).

The playground equipment is totally standard NYC fare - obviously designed to avoid lawsuits, but still pretty fun for the little ones. There's always half a dozen different ways - ladders, steps, monkey bars - to get up on the jungle gym (that's what we used to call it; is that no longer P.C.?), but apparently one of them was not up to code, because it had been entirely covered in a poorly constructed plywood box: 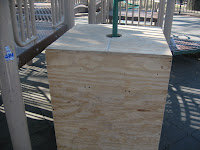 Now, I'm no more playground safety expert than I am a baker. But...really? Is this somehow safer than whatever it's covering up? Hell, I managed to give myself a splinter just looking at it. And the screws sticking out? Sheeesh. Still, a kid can turn ANYTHING into a good time, and by the time we left I saw some spastic sprites grooving on the new piece of "equipment."

Okay, okay, it was kindova slow day. But we hit Downtown Natural Market and I gotta say, it really puts out, organically. If you haven't been, it's Church and E. 17th.

Ciao.
Posted by Clarkson FlatBed at 12:11 AM

I was getting bore since morning but as soon as I got this link & reached at this blog, I turned into fresh and also joyful too. commercial playgrounds

Thanks Angelina! I turned fresh and joyful just reading your comment. Keep reaching at this blog, Angie!