Wreaths On To Believe

Take a father and son team who live on Lefferts Avenue whose specialty happens to be holiday wreaths. Year in and year out the Q has witnessed their annual ritual of topping last year's unbelievable creation. And this year, once again, they've broken the mold, even gracing the NY Times on Friday with both dad and son's creations: 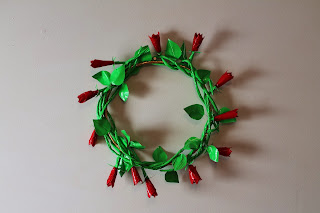 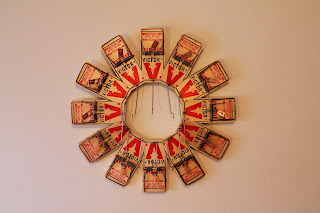 The top creation by 11 year old Hollis Fox was even purchased, making him a professional artist at that tender age. It's made of duct tape and wire. The bottom piece by his father Eddie Gormley is made of rat traps. Mr. Gormley is also an accomplished architect, drummer and pinata maker among other things. He noted that Deborah Zingale, another Lefferts resident, has long been an organizer of the wreath show in its earlier incarnation at the old K-Dog and Dunebuggy coffee shop (now TotT or Tip of the Tongue to newcomers). You can see the show at the Central Park Arsenal Gallery through January 9. Congrats gentlemen! Til next year!
Posted by Clarkson FlatBed at 2:47 PM