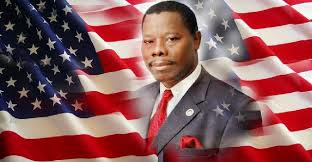 Before heading to bed, the Q flipped over to the Ditmas Park Corner Blog and read the notes from the Community Board 14 meeting as presented by the Corner's Anna Gustafson. The following paragraph is such classic Mathieu "Inside the Flag" Eugene that I burst out sob/laughing. Oh, if you didn't already know, he's YOUR councilman too if you're south of Empire Blvd.


Neighbors encouraged Councilman Mathieu Eugene  to become involved in the city’s participatory budgeting process, which allows constituents to directly vote on projects they’d like to see funded in their area. Residents Johanna Clearfield and William Cerf spoke to Eugene following his formal presentation during the meeting and encouraged him to get involved in participatory budgeting, which such area lawmakers as Councilman Jumaane Williams and Councilman Brad Lander have done but Eugene has not. Johanna reported that during the discussion with the legislator, he asked her if she knew how many city Council members there are and then pointed out that, of the 51 members, only about 20 are participating. “But, that doesn’t answer my question,” Johanna told Eugene. “I am asking if we can have it in our district.” The lawmaker said, according to Johanna, that having participatory budgeting in the district wouldn’t make a difference, saying that “we are all the same. We all work together. I save hospitals from closing down.” The neighbor reported Eugene went on to say that whether there is participatory budgeting or not, anyone can look into how he is spending tax dollars. “Again, I tried to explain the difference between ‘transparency’ (which is certainly important) vs. a constituent being able to impact where and how the money is allocated,” Johanna wrote to us. We have also reached out to Eugene about participatory budgeting.
Posted by Clarkson FlatBed at 11:35 PM

C'mon Tim! Eugene is already doing everything he can for his constituents ....from his comfortable home in Canarsie.

That shows that the good doctor is truly growing in office. Years ago, before the first primary he won, Eugene got on the radio and admitted he didn't live in the district, making a new election necessary at great expense. Now he's gotten smart enough to lie.