Give Money to Help Sue the Q!

Man, it gets weird sometimes. If you want to give to Alicia Boyd and MTOPP's legal fees to sue ME and her own Community Board, well, look no further. You can make a donation or go to the fundraiser below. You can even get a tax deduction, by sending your gift to New Directions in Healing, Alicia's non-profit whose mission has nothing to do with MTOPP. I know from fundraising; this is called "fiscal sponsorship," and it's considered unethical but not strictly illegal. So no, we won't be counter-suing!

She claims that her position has been excluded from discussion, and that her group has not had the chance to be heard. Quite to the contrary, it's all the other voices in the community that have not had a chance to be heard, and the Chair of CB9 is currently soliciting written statements in lieu of being shouted down publicly. Send your own comments, should you feel inclined, to Pearl Miles at pmiles@cb.nyc.gov. Fair enough. However, just in case you DON'T know MTOPP's position, I'm more than happy to give you this web address at which to hear and read everything you need to know. There's a video from Alicia that goes into great detail, and there's all kind of extra documents and backup. I've also posted the lawsuit. Please share widely, as I'd hate to think that I was somehow complicit in shutting down democracy! Btw, pretty much everything on this poster and in the lawsuit can be easily refuted, but I'll let this post be about her. Stick it to the man, man! 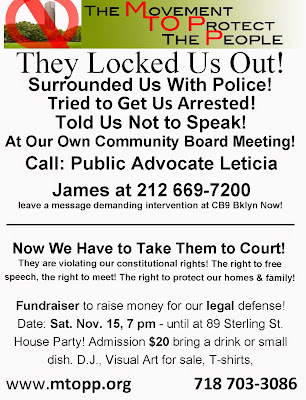 Posted by Clarkson FlatBed at 10:16 AM

Twenty bucks to spend the evening with a delusional screwball? Any estimates on the amount of cash she took in? I'm thinking she collected roughly zero bucks at the door. Meanwhile, throwing a fundraiser at home suggests the AirBnB traffic is light, possibly nonexistent, at the moment.

How often is the Public Advocate's name mis-spelled?

Just to let you know, it was a success. Thank God for Ms. Boyd. We need many more like her in this community. Say no to residential on Empire.

Gimtar, you are so right. Just like developers planning to build high rise hotels on Empire (currently allowed), we have plenty to thank Ms Boyd for. Thank God she's obstructing a study that would result in height and density limitations.