The Phat Albert building. Who hasn't dreamt of another use for the once bread-factory come five-and-dime? It's a terrific store, sure, but such a grand and historic building. Anyone with a penchant for bargains will tell you that Phat's gots the goods. It's frankly not much less a store than Target, though somehow Target has managed to project the image of high-end low-end retail. Someone should have an outsized bust in the marketing hall of fame for that one. When I was a kid in the midwest, Target and K-mart were both consider inferior to the century-old Sears. Holy Turn-a-rounds, Adman!

Albert Srour owns the building, and over the years many have pondered better uses - Trader Joe's, Beer Hall, even residential conversion. But now that Albert has turned over operations to son Jack (Phat Jax?) new uses are surely on the horizon. In the case of the second floor, that horizon is...in about a week. Because as general manager for the ready-to-roll BKLYN Commons Alex Guerra says "come and get 'em while they last." Cowork office spaces, with windows on 'em to create community and light and stuff, are available from not much to $2K or more per month. Or you can sit at one of the community tables for around $20 a day. Granted you could do that at a coffee shop, but c'mon, how much work do you REALLY get done there? Plus you have to buy coffee and lunch there anyway to make it seem like you care about the proprietor's cost of doing business. Here, you ARE the income, so pack your own lunch. Here's a couple pics from inside the newly decked out space: 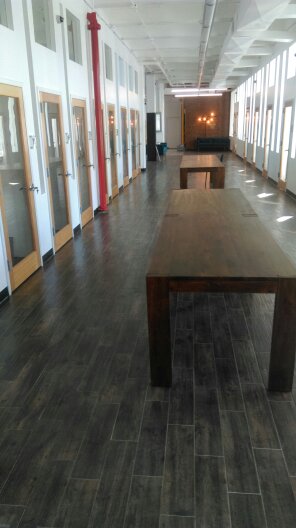 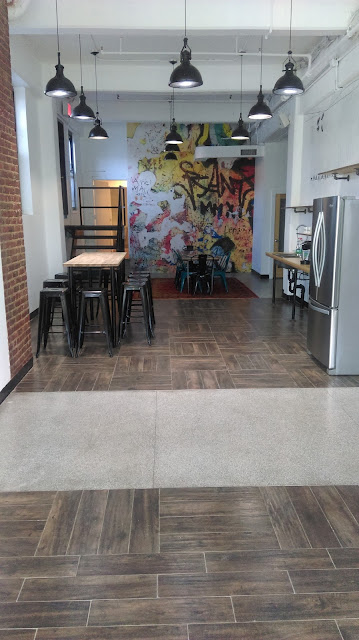 It's got the tech hookups and all those doodads plus a conference room and pretty decent bathrooms. In other words, it's not a whole hell of a lot different than the Compound Cowork in the building next door; the facilities are different and may be better suited to certain needs. If you're interested here tis the Commons. But you know the Q is about more than shill and shillings.

So here's the dirt. It would appear that Jack is interested in "what's next" for his signature space - the Phat Alberts. Got an idea that ISN'T Trader Joe's? Hop on the comment bus down below, and take a look at these swell pics of the clocktower (from inside) and from the roof. 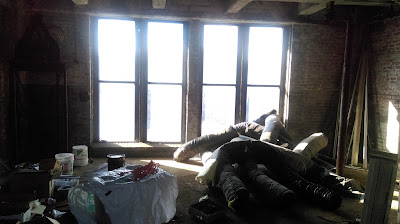 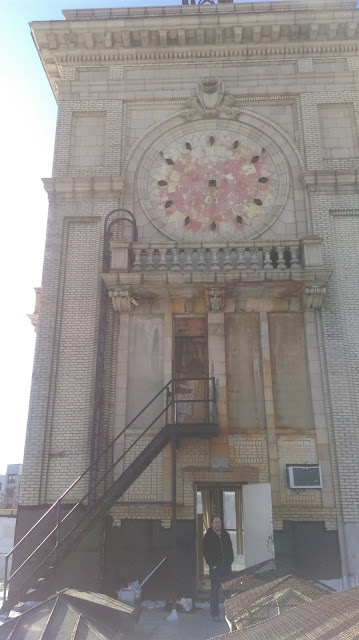 Posted by Clarkson FlatBed at 5:03 PM

And why can't it be a Trader Joes? That would be AWESOME SAUCE! Maybe a beer hall like the Berg'n?

It seems particularly unlikely now, but I had always hoped that this building would become a hybrid Jackie Robinson/Trinidadian Carnival museum. Whatever happens, I wish the building would be landmarked and restored. A restored clock tower would be a great local landmark.

It would be great if the entire exterior were restored starting with the clock should. It was originally illuminated and "BOND BREAD" was painted on the faces. Wonder if that kind of project could be funded by a community fundraising effort. You'd have to get Jack Srour to agree. There are some cool old endorsement ads of Bond Bread by Jackie Robinson on the internets.

That great building could be so many things better than Phat Alberts! I'm not the biggest fan of Target but at least the places are relatively clean and have some threshold for quality. Phat's is disgusting and filled with substandard, overpriced crap. It's made lots of money preying on poor folks in the area for too many years.

Though I think their food is awful, a big chain restaurant like Dallas BBQ would make a killing in that place.

(BTW people, there is no Dallas BBQ in Dallas, TX - first clue something is amiss)

As for the clock tower: I think it should be leased to a entrepreneurial 23 year old who will teach artisanal paper airplane folding. They can launch the planes from up high and see who can hit the metal Flatbush trees. Winner gets crappy BBQ at the restaurant downstairs.

Although the idea is far too charitable (as opposed to entrepreneurial), my pie-in-the-sky wish would be to see the gigantic phat space donated to the Brooklyn Museum as a venue for more experimental art and performances that might not fly in the main building up the hill.

For me, a giant food factory, a la Dallas BBQ, would rank somewhere down with turning it into a truck garage or Trump campaign headquarters...

The space would make a great theater. Maybe a multi-platform art space that housed a few smaller theaters and fledgling theatrical, musical, and other artistic companies. This would be a great boon to the local economy and community. It would also probably generate some symbiotic relationship with the coworking space above... You could also restore the clocktower. The Clock Tower Arts Center, all in favor?

GOODNESS, no Dallas BBQ, but I agree it would probably make a killing there. The one on Flatbush near Brooklyn College is regularly crowded. I have seen a line. A line! For Dallas BBQ!

BRIC/ BAM media space for people to film their social media programs. Or a Brooklyn Fare grocery and restaurant

Although I've only eaten at Dallas BBQ once [at their fairly new restaurant in a former bank building near Brooklyn College] my impression is that they're fairly good, as chains go. I'd reserve "awful" for Appleby's, or maybe Red Lobster [which Marty M. tried for years to attract to PLG]. In any case, I agree that a chain restaurant would do good in that space and could pay the high rent that the owners are likely to demand.

A Music venue for acts not suited for BAM, Kings Theater or the numerous small venues in the area. Similar to Rough Trade, Mercury Lounge or the Music Hall of WILLIAMSBURG (!!!!)

But a Trader Joe's would be my first choice. Why is that not an option to consider?

How about a Son of Phat Albert's with like, a few more cashiers so you don't have to spend 15 minutes waiting in line (which is what keeps me away)? Or just split it into a few smaller stores so it's more manageable.

And that Dallas BBQ gives me loose bowels. Been there twice, but no more. Good for you that you can stomach it.

I'd be surprised if the adjoining gas station is still there in 2019.

How about a storage facility?

I say no trader Joe's only because the message has been duly delivered to Jack Srour. I suspect he wants to run whatever business is in there or at least co-own. I get that. But I think he should rent to someone with a proven business history.

Fast food storage would be ideal

If that's the case re: Trader Joe's then maybe a better question would be, What do you think would be best for the space, community and in Jack's daily endeavors as not only a landlord but business partner?

How about fast food storage with a Brooklyn theme? This borough hasn't made love to itself quite enough yet.

Why not just sell the building? Its got to be worth 20 million plus...

A combination of various size businesses would be great. Aside from Trader Joe's which everybody has already mentioned, I've always wanted to see a Walgreens, a Chase bank maybe, Yolk restaurant (Love this place): http://eatyolk.com/ .

This building is likely appreciating at around 15% a year. When you own such a building, the idea is to have said appreciation happen while you own the building, not the next person.

It would be a wonderful building for a new school.

How about an indoor year-round farmer's market with fish and meat stands?
or a movie theater?

Regarding the gas station, the cost of removing the tanks and the clean up associated with that (for all the leaked fuel) is very cost prohibitive. That makes it extremely unlikely the gas station will be turned into something else.

You can't just shut down the pumps and rent the land.

I'm sure it's costly, Seth. But they're doing it all over town. I can't begin to count the number of former gas stations that have become something else, particularly in Manhattan. Most recently Bedford/Eastern Parkway nearby. I suspect it's a fairly known quantity and you just figure it into your cost analysis, like lead or asbestos abatement. Or marble countertops or onsite parking or...

The gas station is zoned commercial like Empire. No one will do anything with that lot unless it becomes rezoned.

Speaking of, any indication of whether or not DCP is going to take up CB9's request for a study?

Here are two more examples of nearby gas stations that were converted to something else:

-the old gas station that used to occupy the southeast corner of Bedford Avenue and Empire Boulevard (now occupied by 7-Eleven, etc)
-the current site of Checkers

I believe the tanks from the former Exxon station on the northwest corner of Bedford and Empire have already been removed.

I love the Essex Market idea. Otherwise Walgreens. The Rite Aid on Bedford is a travesty.

That gas station sells the cheapest gas around...pretty unrelated but no small feat.