Home for Sex Offenders For Sale

A couple years back there was a lot of chatter about the large number of registered sex offenders inhabiting 1785 Bedford Avenue up between Sterling and Lefferts, across from the Grace Church there. It's a halfway house, a home for those trying to transition from prison to life. As the Q did when this first came to light, I want to remind folks that "sex offender," as awful as that may be, is not the same as "sexual predator" of children. Still, the proximity of so many troubled men has had a lot of people uncomfortable at best, terrified at worst.

It's for sale. So says an Eagle-Eyed Ely. 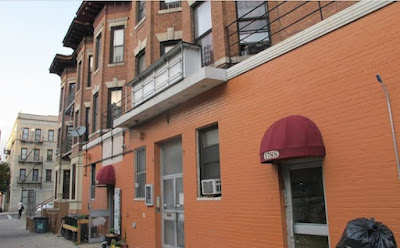 Posted by Clarkson FlatBed at 11:35 AM

If you you think you know what men REALLY want in the bedroom... think again!

Sex expert Alex Allman studied thousands of men,single and in relationships, and asked them to remember their hottest night of sex ever... and then asked them: "what made it so hot?"

The answers tell a VERY DIFFERENT story about what men really want, what they say makes a woman "great in bed," and what really, really drives them crazy between the sheets than anything you've ever read before.

Check out Alex's fantastic presentation on what he learned and how to get every thing you want from men and sex:

This is most definitely NOT the "spice it up"advice you've seen in fashion magazines and tabloids at the grocery check-out line...

Based on years of research with thousands of couples, Alex has completely "revolutionized" the idea of what great, connected intimacy can really be... and how YOU can get it.

Turns out the "common wisdom" is pretty much completely wrong--Definitely worth checking out here:

- Massively increasing his ATTRACTION and desire

- How to deepen INTIMACY and sexual trust

- The one key to making passion last for years

- Talk about sex in way that let's you ask for and GET everything what you want in bed!

There are also lots of valuable and fun bonuses happening right now and they will not last long,so go check out the details now while the bonuses are still available: