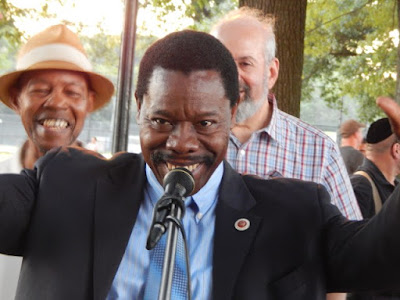 How does he do it? Are we living in some sort of upside-down inverse of reality where incompetence and ignorance puts Democracy to shame? Guess so. If the Orangeneck can do it...

Look, with three challengers to the 40th Council seat in the field it was going to be damn near impossible to beat him. But he basically lost the total votes 6 votes to 4. Think about that. No other incumbent comes even close to those kind of shitty numbers. Cumbo beat back a strong challenger with ease, for instance, and she has plenty of detractors (I do not count myself among them, btw, and I get pretty tired of the nonsensical insults hurled at her, but hey, dem's the games. I happen to think she may be too smart for politics, frankly. After this term, maybe she'll get the deserved turn at helming Spelman College she's always wanted.)

Brian Cunningham's on the ballot in November, on the Reform Line, his ace in the hole sensing this turn of events. Forget about Ross Perot and Pat Buchanan. Ralph Nader also ran as a Reform candidate. BC had the good sense not to run as a Republican. Um, it's not really their time right now.

Go get 'em slugger. But remember, there's something truly remarkably Forest Gump about this guy.

Q it was clear to me-just within my block that the vote was going to be split and Eugene would come out the winner. However Cunningham does have a chance to win the seat in November, but he has to reach out to the Jewish vote; which Eugene does a lot. That's what keeping him alive, as well as catering to the Haitian community. I know he has been going door to door in some blocks, but he needs to do more outreach.

I wonder how much Eugene pays for each vote?

Eugene also has some risk of the independents like me actually being allowed to show up and vote this time.

Why does this say Eugene isn't facing a challenger in the November election?
https://www.dnainfo.com/new-york/20170913/flatbush/mathieu-eugene-council-primary-election

Because sometimes the media is (gasp) wrong, even Rachel, who is a neighborhood treasure, though not infallible.

Corrected now to read:
Eugene does not face a Republican challenger for the general election Nov. 7, but Cunningham will be on the ballot as the candidate for the Reform Party.

However, Cunningham told DNAinfo New York on Wednesday he has not yet decided whether he will continue to run his campaign through to the November election.

Q,
If it is true, please convince him to run in November...Eugene got to go. Our community needs so much service and improvement of quality of life, and his office does nothing. When you contact them, often no one answers the phone...and when you find someone, they are useless. Enough already!

More people voted for someone OTHER than Mathieu Eugene yesterday. I certainly hope all those who recognize Eugene as Yvette Clarke's shill and the most do-nothing in the city council will vote for Brian Cunningham on the Reform line. Maybe there is hope after all.

yes yes yes we all need brian cunningham to stay in the race, as "NOT EUGENE" won the majority of the vote. we all knew that if there were multiple people running against the incumbent the incumbent would win the primary.

"Brian Cunningham, who picked up 30.23 percent of the vote,
entrepreneur Pia Raymond, who claimed 22.39 percent, and
housing advocate Jennifer Berkley, who received 6.23 percent.

Cunningham will be on the ballot as the candidate for the Reform Party.
However, Cunningham told DNAinfo New York on Wednesday he has not yet decided whether he will continue to run his campaign through to the November election."