The Q is sad to bid farewell to Video Revival, the non-profit screening room on Rogers just atop Empire Blvd that had a wildly eclectic curatorial flare. Most recently I'd been there for a kids birthday party - talk about perfect! A little movie, a little cake, seats for 30 rowdy 8 year olds. On that model alone you'd think you could make the numbers work. Alas, it was not to be. From the website:


*** We are on a temporary hiatus, though our location at 346 Rogers is now permenatly closed, sign up for the mailing list for more details on upcoming programming and relocation ***

And the Q was preparing to bid adieu to a longtime blogging institution most recently known as BKLNER. (don't forget that period at the end!) Publisher Liena Zagare has been a leader in the local neighborhood news scene since launching Ditmas Park Corner, nee the Ditmas Park Blog, but then Liena went to AOL for a hot minute after selling the blog to AOL's "Patch" and then came back to launch "Corner" which then became an amalgam of blogs covering Kengington to Park Slope and even "Cheaps Head Bay" and calling it Corner Media and (take a breath Tim) and then THAT became BKLNER. - and all was good in the world. Terrific writers and hyper-local news. I know people who are absolutely ADDICTED to the stuff. And why not? If all politics is local, then all news is politics. Or some suchamuch.

Simply put. It takes. Money. To run. A company. And the advertising dollars for local media don't add up much better than for, say, the aforementioned local art movie house. After DNA Info and Gothamist disappeared a couple months ago after workers threatened to unionize, BKLNER. seemed all the more crucial.

So when Liena announced that she'd need to close up shop by end of this year if she didn't reach a threshold of subscribers (or in the parlance of non-profits "donors"). But like some Christmas miracle out of "It's a Wonderful Life" nearly 2000 hearty souls whipped out their plastic to sign up to make payments as low as $2 a month to keep the enterprise going - for now.

And to roll with this theme the Q just noticed that relatively longtime falafel stop NY Halal & Co just became Atomic Wings, probably to boost numbers. Shrewd move methinks. Folks love wings, even when they look like warmed over schmegg. Think on it. Someone had to actually stage and take this picture, and conclude it was a winner: 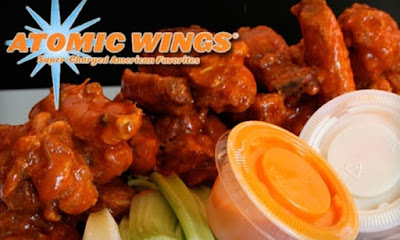 The Q's a big boy and he loves crappy food. But quite honestly, that picture is giving me a hankering for a fast at least til the break of said fast. As in, nighty night.

Where is the new atomic wings? At parkside & flatbush?