In Bold Move, DOT To Turn Flatbush Into Pedestrian Mall

As the Q mentioned back in February, DOT is in the midst of a major study of the Flatbush corridor many of us call "Main Street" or the Flabenue. After discussing the major issues, including suicidal Dollar Vans, rampant double-parking, lawlessness at intersections and psychotic jaywalking, both DOT and the Mayor's Office on European-Style Civic Improvements (MOESCI) have decided to cut their losses and completely ban automobiles from Empire to Church. Below, the agency's CGI rendering shows what they have in mind: 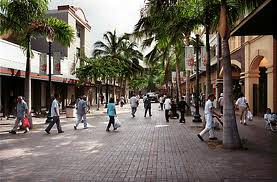 While palm trees may seem out-of-context now, DOT officials note that within five-ten years time winters and freezes will be a thing of the past, making tropical flora the go-to choice for northeastern urban planners. Spokeperson Cameron Carswell says "Most commercial buildings will opt for adobe construction, and Spanish-style architecture will dominate NYC south of the Bronx and Northern Queens, both of which will likely opt for a more North African, or Moorish, approach."

The Q is uncharacteristically speechless and writeless. I'm all for change...but couldn't we just put a couple of traffic cameras in for starters?
Posted by Clarkson FlatBed at 9:48 PM

You're misinformed Q; my informant in the DOT assures me that, due to abuse by pedestrians, Flatbush will be a dedicated bicycle path with all other forms of locomotion banned. The ONLY exception will be that cyclists who experience a flat tire, or other mechanical malfunction, will be allowed to proceed on foot to the next intersection where they must turn to avoid a summons and confiscation of their walking shoes.