And the saga continues. Alicia Boyd just sent me a FOIL request, asking me a question she should have just, you know, asked. She wanted to know who was on my Transportation Committee and who appointed them. Now that she sits on a subcommittee of ULURP, I think it's about time she gave up this her against the Board crap. She helped get the District Manager fired. At least four members have quit or been removed in disgust. She practically runs board meetings. Now she participates as an appointee. So what's with the FOIL? More grandstanding, that's what. Then she sends an email about me full of lies. Am I the only person willing to stand up to this bully? Sometimes I wonder...god help us all.

So as a palate cleanser, I'd like to tell you about a show my longtime band Babe the blue OX is playing at BAM, to accompany the theatrical premiere of a couple of documentaries on the Q's beloved Rockaways. If you're like me, they're the Riviera of Queens, a respite from the summer heat and a place to frolic in the ocean mist. The kids are growing up calling them "the Beach." Of course, Sandy was a terrible reminder of the perils of living on a barrier island. The first film covers the history of the Bungalow colonies, and the second chronicles the aftermath of the hurricane. Babe plays the role of the hurricane. It's the first time in our career we play in a movie theater, and its BAM to boot. 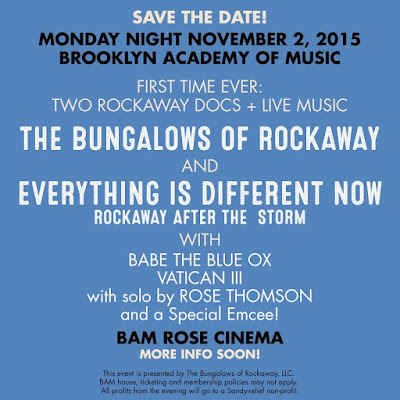 Posted by Clarkson FlatBed at 1:09 PM