Et tu, Imani? Imani Henry Is Behind the Racism Charge

The Q had always wondered where all the talk of my racist blog started. I combed old posts for things I might have written that could be misconstrued. I guess I figured my sense of humor was such that sarcasm could get me in trouble. I blame David Letterman. I was a pretty sincere kid, then I caught the irony bug. It's really hard to wash it out in the tub.

A couple years ago I came across a guy named Imani Henry. His group "Equality for Flatbush" sounded great on the surface. The anti-gentrification thing seemed a tough sell, but he'd been priced out of various neighborhoods (who hasn't?) and felt that black Brooklyn was being colonized. Basically, I agreed, and we spoke on the phone about his efforts to film cops doing bad stuff. Cop Watch. I think it's become a lot tougher for police to go all Rodney King knowing they'll be filmed, but clearly it hasn't stopped the insanity. I never imagined what would happen next. He went crazy on me at a CB9 meeting after I called out Alicia Boyd as a jerk. This was, in his mind, paramount of treason.

When Imani hooked up with Alicia and MTOPP they saw that they were birds of a feather. They were willing to go to any length to achieve their objectives...actually, I still don't fully understand what their objectives are. Clearly there's a power thing there, the ability to say you're leading a movement, that you have substance, that your thoughts and values have worth in society. (Wait...why does that sound so familiar?)

Last year a petition was put out asking for my removal from CB9. I wasn't surprised to hear that MTOPP was pushing it. The racism cry was painful but I kinda got it. Nobody likes a big white guy yelling at you. Nobody. Except maybe at a football game. My bad.

So who was behind the petition? Who was pushing it and making it such a big deal? I guess I shouldn't have been surprised to learn it was Imani Henry. "Equality" for Flatbush indeed. What a sad excuse for an activist, sinking to lying about people and skulking behind the scenes. Oh, he'd deny it of course. But this time Mr. Henry, you've been caught red-handed. The Q has unearthed the following email, and clearly Mr. Henry did NOT want to go one the record as having written and promoted the petition. As a local blogger I guess this as close as I'm going to get to the Pentagon Papers. 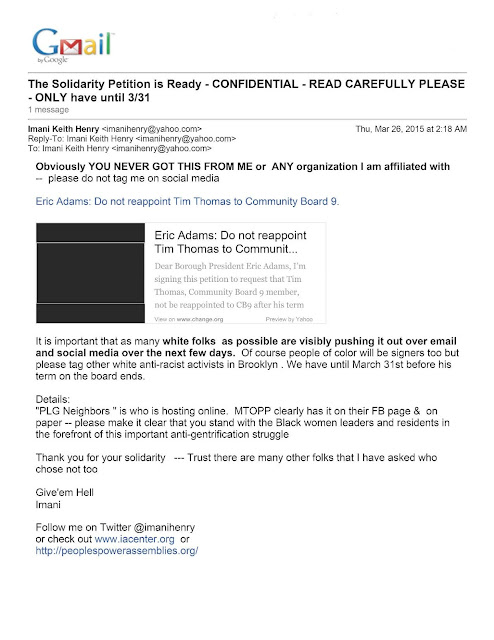 Posted by Clarkson FlatBed at 8:02 PM

Big up to the person who forwarded you the e-mail! If you can't own it, don't do it.

I'm finding myself continually disgusted by our "neighbors". Never thought I'd be excited about moving, but I am!

I will not vote for Eric Adams again. People think he's great because he agrees to every meeting anybody requests. Which is then followed by nothing. Probably Imani got such an audience and believed they really connected. Whatever.

I have seen Imani Henry at work and he is nothing less than an absolute racist. He is the worst kind too, reverse racism does not help any cause other than to further oppression.

Uh huh
Moving...why? That's what they want; that's what they expect. I say we keep fighting. This is our neighborhood; our home. We are entitled to be here just like Imani and that self-righteous woman.

Imani Keith Henry is a self-serving, race-baiting outside agitator in the convenient guise of activist. I have been on the receiving end of his racist vitriol on several occasions while sitting in the auditorium during several CB9 meetings. If you don't agree with what he says or refuse to interact with him and you are white, his immediate default is to call you a racist, which is then quickly followed up with a quick oral review of his resume where he states that he has a Master's degree in social work.

Oh for God's sake. What a stupid thing to say. When I hear this crap, I know just who I'm dealing with. What, are you gonna tell me you don't see color too? FFS. I don't know if Imani is really a bad person but I can understand where he comes from. A lot of his detractors are coming from a place of ignorance, vanity, entitlement and bitterness. It's not white privilege. It's mainly ignorance, and right to remain ignorant of others who don't look like you. That's the problem.

yeah, I'm with you "whatever." I don't think "reverse racism" is a thing worth naming. He's a jerk, plain and simple. As I wrote months ago, he's mostly on the right side of issues, but he's turned it into a personal thing and can't stand dissenters. Proof positive is the way he blocks non-believers from seeing his content on social media.

With all the offensive words out there that people can use against people of color, the one word that really gets a white person's goat is "racist." So of course the word comes out. I take no offense in those heated situations...it's the petition and the organized campaign to smear me that pisses me off. I particularly like, on his "I didn't have anything to do with this email" email the way Imani says that he wants as many white people as possible to sign it - it's a mindfuck trick, designed to make me question myself. A lot of those signers will do whatever they're told, in the name of the revolution. Kinda reminds me of the way I was in college. Makes me nostalgic for the black-and-white vision of the universe.

It's all fine. Just people blowing off steam.

The real meat here is what's happening behind the scenes with the politicians and lawsuits. In Deep Throat style the line should be "follow the lawsuits..." Alicia has a strange power right now, and I don't think it's simply the result of her powers of persuasion.

In the beginning, I did not agree with some of your language (some I can take or leave) Boy, did I learn fast. It is about Freedom of Speech for all, not just for some. Like it or not like it.

My two cents...start a Community Group. The sane voices of the community need to be heard. We can take action.

If you do this, you will be surprised who will come out and support you.

One door closes and a whole community awakens. Again, my two cents.

Histrionics are a short-sighted method. AB and IH may have gotten what they wanted now by throwing tantrums and calling in extra support from people who don't even live in the neighborhood, but I think (and hope) they'll find that people are less likely to kowtow after the drama subsides and there's no substance or plan to back up the increasingly unhinged rhetoric.

After all, they've been at this for what, a year now, and have no tangible achievements except executing a personal vendetta against someone they don't like. They've done nothing to "stop" gentrification except railroad a few meetings into chaos and pretend that hashtags and sparsely attended pep rallies achieve anything concrete. They can't point to a single instance and say "we stopped this family from being displaced, and here's how."

They're basically the Trump campaign of PLG. Eventually there's going to be a backlash.

I'm sick and tired of people claiming that this is "their" Brooklyn, "their" neighborhood etc.

I've been here over 20 years, and believe me nobody wanted to live in PLG then. Guess what, I got priced out of the Brooklyn neighborhood i grew up in and parents and grandparents grew up in. Not based on race but economics.

PLG belongs to whoever lives there - its that simple. No one has a greater claim to it than another, especially based on race.

They've made money off of this - Imani Henry through various crowdfunding campaigns that never were accountable for where the money went, and that woman through contributions to MTOPP channeled through her spurious 501(c)(3) foundation for her weirdo healing and crystal business. That's their angle, and when it peters out they'll shut up or find a new scam.

And I sincerely, sincerely hope you're right about Trump but after New Hampshire I'm pretty scared. Looks like the lunatics are taking over the asylum on a national level as well.

It should be noted that in their annual request for random stuff to the city, CB9 asked for increased police presence in the form of beat cops. E4F's attacks are clearly targeted toward certain individuals only.

God bless you for still fighting the good fight, trying to stay reasonable, bending over backwards to give the benefit of the doubt, searching for common ground...with someone who is clearly from the same vitriolic bot factory that brought us Charles Barron and before him, Sonny Carson et al. I went a few rounds with Carson and his minions back in the 80s here in CB 14 over the trumped-up "Korean fruit store boycott" (as a mere civilian, not a CB member), and damn would I have burned out fast if I'd tried to do community grunt work for more than 20 minutes in the presence of such radioactive racist spite.

What babs says about the "nonprofit" income for Imani and Alicia, that's going on all over this entire area of Brooklyn. This place is covered in storefront churches and seemingly everybody has a nonprofit charity. It's kind of a racket around here. Crown Hts has a large community of Hasid and Orthodox many of whom are rabbis or scholars, something that as I understand it means they don't pay income tax. No wonder the city needs to add more housing for people who actually pay income tax. That's another way Alicia's actions counter what she claims to be her goals. The city can't get more low income housing or better schools without bringing in more tax revenues. Seriously, how do people think that's going to be funded?

My dealings with Imani and Equality for Flatbush have proven to be more than disappointing. Imani screams for racial equality yet is himself a blatant racist. He uses his ethnicity to hide behind in order to blast anyone who is not black. Equality for Flatbush is only interested in equality for black Flatbush. If you are white, you do not count. He is a hypocritical disgarace.

I never thought I'd defend Imani Henry but, while I agree with Rescue2 that he's a hypocritical disgrace, I don't think he's any kind of racist. After all, many, perhaps most, of Henry's followers are white. My objection to him is that he's a proponent of a narrow, rigid, totalitarian vanguard party that will do anything to stifle dissent from anyone not an obedient follower of their current line.