Before You Opt Out Of Your Local Public School, Read This

Wherein the Q accepts a writing assignment for hire. I thought I'd write 500 words and cash the check. But out came the flood of Gen-X self-loathing and over-analyzing. The cheap editors at the Q never pay me for my work, so I was glad for the opportunity to earn enough money to afford a date with Mrs. Q at the Alamo Drafthouse.

I do like seeing my name in the byline. Makes me feel...writerly. 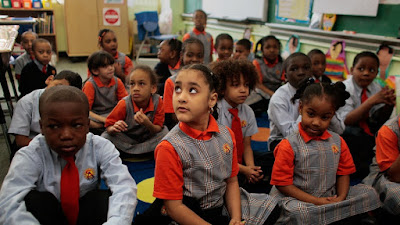 We wanted to live in the big city. We wanted to stay in the City. Then we wanted a house or big apartment in which to raise kids. Seemed straightforward. But that's when the struggle for our very souls began in earnest. The next big question facing us is existential: which school will we send our children to?

Who's we? We are the mostly white, mostly middle- and upper-middle class, schooled in liberal arts, culturally attuned to NPR and the New York Times, The Atlantic and the New Yorker, with a smattering of Mother Jones or The Nationissues in our lobby mail slots. We can go to parties and talk about racism and bemoan white supremacy in a gorgeously renovated living room with a Black Lives Matter placard in the window. We want to fix X and Y problems, and yet when it comes down to it, we support charter schools, “forest schooling,” and testing our children into the “gifted” school. MORE.

Posted by Clarkson FlatBed at 6:33 PM

Scam alert on Flatbush and Empire: dude bumping into people, dropping bag, showing broken henny bottles, demands 40 bucks. Don't fall for it; tell him to fuck off. He's a dick, but won't bite.

Thanks for the warning Anon. Does it have any connection to public schools that I might have missed?

IMO anyone dumb enough to fall for this VERY old scam deserves what they get.

It's true, the kids are not sociological experiments. And maybe it won't matter much where they spend their elementary school years. But the next step matters. Middle school, intermediate school, junior high. Whatever you call it.

Anyone who misses the opportunity to enroll his child in Mark Twain Intermediate School is penalizing the kid. Yeah, there are some hoops to jump through for acceptance into Twain. The kid has to demonstrate a talent of some kind. From science to performing arts.

The only other school in the city that equals Twain is Hunter College High School, which starts in 7th grade. But Hunter is way the heck up Madison Ave on 90-something street. Twain is in Coney Island.

That aside, sorry, there's no "racism discount." Once again, you jabber about the city as though it fell from the sky in 1980, as though its configuration at that time explains the entire NY City cosmos. Pretty much all the houses in PLG were owned first by whites who flew the coop over the years.

A big driver was the change in school policy in 1968. White flight began in earnest when control of schools was handed down to local districts. Whites were disenfranchised, but rather than waste years fighting, they moved. Much easier. Much more effective when measured against the few years kids spend in schools.

The Gifted Program! Great. Makes a big difference. And shows all the weaknesses and strengths of each ethnic/racial group.

Results are in. By the end of 3rd grade, the divide begins to open. By then, the Asian kids are in the lead, whites are next, and the tail end is filled with blacks and Hispanics. Despite endless attempts to change the results, there has been little change. But charter schools do offer the best possibility. Of course, the Teachers' Union is strongly opposed to good ideas. Shaken to its core by the thought of competition.

Fortunately, some people in the Dept of Ed are smart enough to know that fooling with the Specialized High School Program is insane. But, as we know, all kids have a shot at attending the dozen top high schools. The entrance exam determines all. But there is free exam prep for everyone.

Nevertheless, the top schools are more than 50 percent Asian, roughly 40 percent white, and less than 10 percent everyone else. But, Asians account for only 15 percent of the total student body in the NY City public school system. Same 15 percent for white. Blacks are 30 percent, Hispanics are 40 percent.

More people should follow the example set by the Asian students. There's no secret sauce. Study. Finish homework. It works.

But again, the "racism discount" is like climate change. The system is never in a state of equipoise. It is dynamic and it is marked by ebbs and flows. Much of the damage to real estate has arisen from government interference with the real estate markets.

It's as though some kind of inverse physics occurred. A rise in violence and decline in school performance followed the white exodus from many neighborhoods. A vacuum. But the race theoreticians accuse the departing whites of causing the problems -- by leaving. Now, whites are again demonized for returning, even though they're making it possible for black homeowners to enjoy well-funded retirements. It's getting hilarious.

In the early 1950s, NY City was about 85 percent white. Start with that. Now it's about 30 percent white. And if NYU, Columbia and other schools continue to increase their real estate holdings, the question of who or what businesses will carry the burden of property taxes will assume painful proportions.

Speaking of scams...my good enemy No Slappz is back with his climate-change-denying racial superiority nonsense. I'm leaving it up, as I sometimes do, so we can all see the rational racist ideology in full bloom.

Remember, this is a guy who lives around here. You might know him. I think his nickname is DJ Bell Curve.

Anyhow. The thinking he employs is fairly indicative of why it's so hard to make progress on thorny issues of educational apartheid.

Anyhow. The thinking he employs is fairly indicative of why it's so hard to make progress on thorny issues of educational apartheid.

Hilarious. The facts are the facts. Worldwide. Like F=MA and E= 1/2MVsquared. The academic success of kids in this city -- and every other city and town -- follow a pattern that is not imposed by some anti-black/Hispanic racist ideologues running the school system.

Frankly, the top school administrators in NY City have taken their best shots at advancing the cause of students who under-perform. In group terms, that means blacks and Hispanics. The top administrative dogs in the system, including the recently retired Chancellor and possibly her questionable replacement, dislike the Specialized High Schools because those schools admit kids on the basis of what they know and can demonstrate on one test. Somewhat like colleges with respect to the SAT.

Of course, Fiorello LaGuardia High School -- the Fame School -- is also one of the specialized high schools. Something tells me it's not over-weighted with Asian students.

As for the Bell Curve, clearly you didn't read it, or understand it. The summary statement is pretty simple. Those who perform better than average on IQ tests have better life outcomes than those who score lower.

The book does not conclude that blacks are less intelligent. But it did point out that black IQ scores were slightly lower than white IQ scores. It points out the impact of the differences. No explanation about why one group scores better than another.

An IQ test is a test. People accustomed to taking tests will, inevitably, receive higher scores that people who put less value in taking tests. You can study for an IQ test. Sometimes the study comes in the form of repetition. I've taken them in many forms over many years. In grade school, high school, the army, college, software school, employer tests, and more.

It's said that Google's test is a killer.

Success in school is all about the household culture. Some households operate on better principles than others. See Asians for the obvious example of doing it right.

Thanks for writing this. I'm so sick of these offensive guinea-pig remarks. I hear that excuse all the time - the same folks who talk a big game about loving diversity and post about Black Lives Matters on Facebook. Even those whose children are mixed-race (think of the message it sends to their child - that their "black side" isn't good enough). I grew up one of the few white kids in my school and have spent almost my entire life being one of the few white faces in my community. It's GOOD for white people to know what it feels like to be a minority. It taught me a level of empathy for POC that sadly I don't see often in friends that grew up in the lily white 'burbs even when they have the best of intentions. FWIW I went on to get a Master's degree and make 6-figures so it clearly didn't fuck up my future (though white privilege is white privilege even if you grew up in a poor black neighborhood, but that's a topic for another day).

Thanks, Anonymous, I loved your response and I thought that the article was well written and to the point too.

It's GOOD for white people to know what it feels like to be a minority. It taught me a level of empathy for POC that sadly I don't see often in friends that grew up in the lily white 'burbs even when they have the best of intentions.

Since the 1950s, the white percentage has been declining. But the percentages of blacks, Hispanics and Asians has been rising.

To see where things are going, one needs only to look at the demographics of the public schools.