Kinda Krazy, but The Brooklyn Museum has joined the crowd-sourcing and X-factor zeitgeist and created a program to identify artists from the borough for a BK show. It's not like Brooklyn isn't already home to scores of well-represented artists of all genres, but they've created a means for you to help attract the curators' attention. It's called GO, and if you create an online portal through this registration thingy, you can get your wares in the game. Leslie Ward is the PLG rep for the project, so you know you'll have a local cheerleader in the volunteer mix. 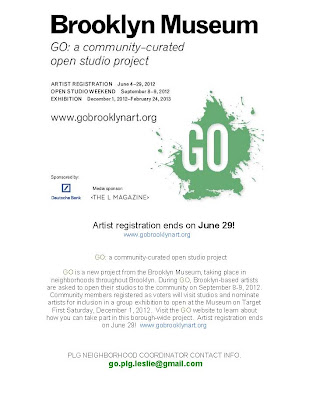 Very few artists will actually make it the distance and get their work in a Brooklyn oriented show at the Museum. Two, I think. But this is always a good way to reach out and let new people see your work, since it involves a studio visit for a number of the semi-finalists. The Q worked at the Brooklyn Museum from 1989-1994. During that time, Charlotta Kotik was the Contemporary Curator and is a good friend of mine to this day. She and I recently reminisced about how gritty Brooklyn used to be (want to nourish those memories? come on down to clarkson ave!) and how hard it was to get folks to cross the river for arty stuff. Her "Working in Brooklyn" shows in the early 90's were the first mainstream indication that something was seriously happening here...priced out of Manhattan, the enormous industrial neighborhoods of Brooklyn were witnessing a massive influx of working artists, and musicians like myself. Those of us who lived here felt it, of course. It wasn't until a decade on that you really saw the full-scale bourgeois thing happen, with the food and the coffee and the boutiques. Now every town in America uses a focus on arts and artists as a way to draw investment back into forgotten downtown areas. Though NO one can rival Brooklyn, adopted home of the quarter-finalists, for ambition and smarts and neurotic perfectionism. The semi-finalists sometimes even stay or move here now. A couple finalists now proudly call Brooklyn home as well. Not bad for a borough long-used to consolation prizes. All snide asides aside, no one could argue that Brooklyn is under-exposed anymore. And sometimes you gotta wonder when to say "enough already" with all this art, art, art. My day gig is at Bang on a Can, and our Marathon ran this past Sunday. As nearly 2,000 sat totally quiet in the Cathedral of Money that is the World Financial Center's Wintergarden Atrium...listening to the sounds of conch shells played in a cistern and an experimental open mic piece by Alvin Lucier, then surround-sound spectral music by Gerard Grisey performed in 3-D at midnight by brilliant percussionists with moving stages of gear..I thought to myself...bring it on baby. Without the art, we're just consuming and surviving. And loving, of course. GO. Brooklyn.
Posted by Clarkson FlatBed at 11:40 AM