Trash along the Flabenue seemed to hit a new peak last week in a troubling portent for summer 2012. This first view from inside Play Kids shows the incredible pile up of illegal dumping that happens more regularly than not: 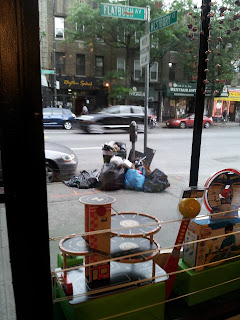 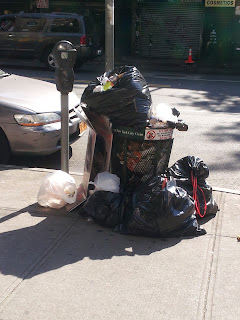 some of these bags turned out to be full of not household garbage or even typical business garbage, but the blood and guts of chickens. That is not a joke. The carcasses and blood led to an intense rotting stank and swarming flies. Repeated 311 calls eventually got the garbage removed. It was a brilliant and hyperbolic reminder of what we're dealing with around here - a sanitation situation that no one seems prepared to or capable of dealing with. Some of us, and believe me I've talked to quite a few bewildered long and short time neighbors, are flummoxed beyond belief...is this really something we have to just throw up our hands and tolerate? Of course not. Still, a simple solution eludes.


In my role as chair of the Environmental Protection Committee at Community Board 9 I've tried to wrap my head around this seemingly intractable problem and I feel like I have a pretty good sense of what we're up against. As always, I'm writing the Q at Parkside not in any official capacity but as a private citizen/geek/blogger and I only mention the community board because I continue to believe, perhaps foolishly, that there is a way to combat the problem using existing levers of governmental influence. I certainly hope so, anyway.

Nearly every block from Wendy's to Duane Reade has a few businesses that ignore the law and dump their trash either at the corner or in tree pits. Until I got schooled I had no idea just how illegal this is. Each business is required to contract private garbage collection; the City provides this service for residential trash only. And each business is required to show proof of this contract so that it is clearly visible to DSNY - usually in a window near the door. Tickets are supposed to be issued for non-compliance, and in other parts of the City they routinely are. For some reason, the penalties around here are not sufficiently levied to stop a significant number of scofflaws (and I emphasize the phrase significant number because plenty of business follow the rules and are just as pissed as the rest of us that fellow merchants choose to flaunt the law - heck it's usually only $30 or $40 a month we're talking here). Sometimes businesses dumpe their illicit garbage blatantly; others do so under cover of night. It's shameful really, since the corner garbage cans are intended for litter from passers-by. When a pedestrian DOES have a piece of trash to dump, the bins are frequently overflowing and unable to accommodate so much as a gum wrapper.

That's not to say that individuals and businesses from off the Avenue don't get in on the act. Bags of residential trash are routinely left on the wrong days at the curb or topping off the corner bins. On many occasions I've noticed construction garbage, bags and bags of it, that illegal dumpers drop on our streets assuming no one will care. Mad Momma Carmen even managed to catch a cheap landlord dropping apartment renovation trash in the 'hood, and the City takes this kind of dumping very seriously, and can impound cars and levy big fines and jail time Though as a practical matter, it's extremely uncommon that people get caught.

To complicate things, many mixed-use buildings don't offer proper guidance and space for tenants to store their garbage properly between residential pick-ups. These often poorly bundled bags often cause a blanket of trash to greet one on most morning's commute. Treading through ankle-deep trash is so common you almost don't notice it after awhile.

To summarize the reason it's worse here than on other heavily trafficked commercial corridor - there is NO merchant's group to speak of that has the ability to change the behavior of existing businesses and landlords from Parkside to Empire. By contrast, from Parkside south, the Flatbush Avenue BID successfully keeps litter and dumping at bay by hiring workers to keep the avenue clean between DSNY pickups. It's a big job; but the Flatbush BID takes cleanliness seriously, and the result is a reasonably clean street. Litter persists of course; the sheer numbers of pedestrians helps ensure a steady stream of wrappers and soda cups and the perennial favorite, dog poo. But since the problem is not generally overwhelming, individual business owners tend to address small messes quickly even before the hired guns come by and sweep it up.

As an aside, I'm not convinced that the Flatbush Merchant's group - FEPMA - has the skill or support to do anything about the problem. And without major outcry from the community, DSNY doesn't seem moved by individual complaints to systematically address the intense lawlessness. So who's gonna step up? I haven't even mentioned the sh#t-show in front of the subway stations, particularly on Flatbush just north of the Prospect Park entrance on the way to Empire.

My next move is to invite Pearl Miles, district manager, out for a walk-through. I'm also going to drop more of those single-page of rules on worst offender businesses. Maybe you agree that the problem is serious enough to warrant some kind of response. Or maybe you think I'm a kook and should find a real issue to complain about it. Who knows...maybe I'm the one who just doesn't "get it." As always, I'm happy to leave you plenty of space below to let your feelings be known to all.
Posted by Clarkson FlatBed at 8:36 PM

Please check out the huge and growing pile on Flatbush just before the entrance to the Prospect Park subway station. I cannot describe the variety of horrors that are placed there on a daily basis and despite DAILY 311 call no sanitation has come around to pick it up.. Disgusting!

totally agree. Last week someone dumped a mattress in front of Umma playground where it stayed all weekend. disgusting.

Do any PLG businesses get citations from Sanitation? If so, is that info public? As a member of the staff of the LM Echo I can tell you we'd do our best to make room to publish that list of businesses who are more than happy to take our money but can't be bothered to clean up their filth. If people knew who to blame they might take their patronage elsewhere and that would cost the scofflaws much more than the cost of commercial carting.

As an aside, I think this is some small way an unintended consequence of the state getting organized crime almost completely out of the trash-hauling business. Before that, if you had a business, you could be certain that someone would call on you and let you know — with a knowing grin — that your annual contract was up for renewal. Very few businesses wanted to risk finding out the price for not signing up...

Let's start by pushing Dept of Sanitation to put up those No Illegal Dumping signs seen at that link, all up and down Flatbush. That combined with following through on 311 calls will make PLG a hostile environment for dumpers!

A few years back I called 311 repeatedly about the building on the northeast corner of Winthrop and Flatbush (can't recall the bldg number right now of the type of store it was at the time -- it is now the fabric store), and they cited the store for lack of documentation (license?) for commerical trash removal. I was surprised by the responsiveness, which I have not seen in my recent 311 emails and calls about 713 and 700 Flatbush....

Thanks for bringing attention to this issue. I had no idea it was so bad! I live closer to Nostrand and only come to Flatbush occasionally. But I'll keep my camera-phone ready to catch scofflows in the act!
Cameron

How can we as a community formulate an ACTION PLAN regarding this trash issue! Can you raise some of these issues in your community board meetings?
1. Citations to be issued by Dept. of Sanitation
2. Illegal Dumping signs along Flatbush
3. Shame the businesses and landlords who continue to disrespect our community (sustained complaints to 311)

All items that Anon at 1:03pm mentioned have been explored and I continue to champion. Please join me at the next Environmental Protection committee mtg on Thursday, June 14, 7 PM at CB9 headquarters at 890 Nostrand near President.

Earlier that day, District Manager Pearl Miles and I will go on a tour of the Avenue so i can point out all the hot spots.

I hate reading about how when parks become completely unsanitized because of the simply selfish nature that is present for it to be all that takes for it to the stay the same, and let the other people be convinced its okay.