Keep Your Eye On the Armory

Your name on this petition will help show that the community wants to retain a say over how the Bedford-Union Armory is developed. Please take a moment to sign so we can show numbers. We want to make sure we have a chance to weigh in before the City sells its development rights or leases longterm. A group has formed called the Community Armory Committee to create an alternative proposal. FYI, while the online petition is just getting going, I'm told by CAC that nearly 1,200 have signed the paper petition so far. So you're not alone.

Over the past couple years, a lot of folks have become increasingly excited about plans to rehabilitate the Bedford-Union Armory (located oddly enough at Bedford and Union). From the moment it was announced that the big building, with its massive drill hall and ample grounds, would be turned over to the City from the State, folks have wondered aloud about the myriad possibilities. Youth center. Sports facilities. After-school programs. Even areas for seniors or arts or daycare. (One idea I hope has gone by the wayside is "roller rink." Seems we've got that olde tyme entertainment covered at Lakeside).

But here's the catch. NYU grad students did a study, and the City released an RFP last fall, due end of January. We, the people, have yet to see the proposals. It's not clear yet whether we, the people, will have any say in what happens there. From the get-go, it's been suggested that there must be some sort of housing development component in order to pay for the overhaul. This despite the fact that the Park Slope Armory needed no such selling of development rights. I'm not necessarily sure the housing piece couldn't be an excellent trade-off, IF it were structured in a manner beneficial to the many residents seeking to stay in their neighborhood - i.e. that catch-all phrase "affordable housing." But why start from the supposition that commercial uses are necessary? Is that ALWAYS gonna be the story now, even as the City's coffers refill?

Because, and I know not everyone agrees, the site has ALWAYS, until now, been in the hands of the people and managed with tax dollars. It's a friggin' ARMORY for chrisakes. Now that the State of NY admits it's no longer needed for military purposes, doesn't it make sense that the "peace dividend" be paid back to the neighborhood from whence many young men trained and fought and died for their country? Exactly how far back do people's memories go anymore, anyhow? This things was built in the time of Teddy Roosevelt. What do you think Mr. National Parks would have to say were he not stuck inside that South Dakotan cliff? I'll be he wouldn't say "give me some luxury towers to pay for that community crap"

What I'm saying is that I don't think people have much vision anymore. The go-to line is "public-private partnership," under the guise of which really dubious decisions are often made. No one has the guts to put real public money towards projects, so they resort to an ass-kissing stance designed to keep donors and developers (redundant?) happy.

I've got a better idea, so listen up powers-that-be! Why not put up $50 million bucks in public money IF a private donor comes in at same. That's right; match a billionaire's gift 1:1, and he/she can get their name on it. The purpose of the place will be for 100% public use on a scale far more equitable than what the YMCA runs in P-slope. Young people under 21 and schools can use the facility for free. Students over 21, free. Seniors, free. The rest of us, $100 a year for the family. Some groud-floor retail available. $25 million set aside for longterm operation and maintenance. 501c3 "Friends of the Armory" set up to raise funds for special projects and shortfalls. Once a year giant Armory Ball fundraiser - a fancy event for everyone, live olde time big band music - think "The Savoy," tickets starting at $50 up to $5,000 for a table and dinner. Might look like this scene from the '20s: 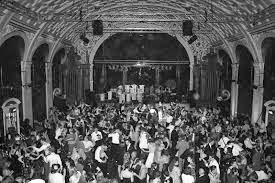 I mean, c'mon, here's what it looks like now: 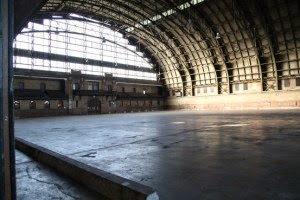 Which reminds me, I haven't seen that great Lindy scene from Spike Lee's Malcolm X in awhile:

There are many reasons we ran into problems after the initial building boom of the early 20th century, but one of them is not thinking ahead to how buildings are going to support themselves. Building a project with an idea for how the project remain solvent is not a terrible idea. Assuming ongoing charity is not usually a good idea.

Building more housing (even affordable housing which based on some of the income-sensitive housing locally, I wouldn't even qualify for because I've never made that much money) still adds to our housing supply.

Here's what development should do: help the land pay for the building. Previous generations built without any longer term view of sustainability. Let's be smarter about it.

What makes you so sure a commercial project has legs? Ask Detroit. Literally hundreds of projects that relied on business support failed. You give the corporate world way to much credit, Christopher.

What's not smart is assuming the promises are true. This country is littered with vacant malls. Seemed like a smart idea at the time, didn't it?

Christopher, there are tons of non-profits and government supported in this country that have outlived once-regaled companies.

I wonder had City planners thought like you, would we have parks, museums, beaches or any landmarked buildings whatsoever?