The Q hates himself sometimes for always looking North. There's so much going on south and west of me it's easy to forget I started this blog thing to circumscribe the train station the Q at Parkside. In fact, quite a bit is happening in the microhood I call Caledonia, due to the decades long stint of the Caledonian Hospital on Parkside, now known to the world as 123 on the Park. Those 123-ers have now gone public with the brand new building they're building just next door: 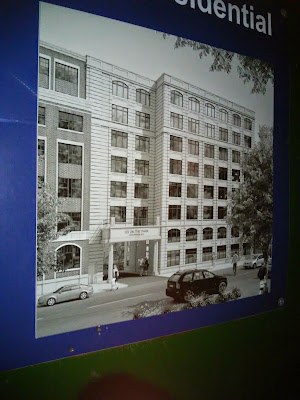 With an entrance on Parkside, it'll function very differently than 123 and change the often quiet and dark stretch a great deal. But once again, like SO many renderings before it, do you notice something about the people drawn in the rendering? Look close: 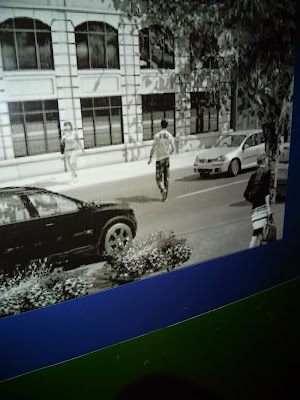 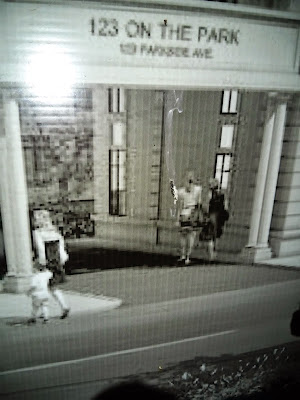 Yep. You noticed too? Every single one of them is fit as a fiddle and lean as can be. Not a chunker among them. No flab on these cats. The inherent size-ism* is clear as a bell. I mean, what are the chances that six New Yorkers and one kid are going to be trim and fit? I mean, outside Chelsea. For shame.

If I've heard the old saying once I've heard a hundred times: "as East 21st goes, so goes Caledonia." It's a fascinating street, especially "our" section from Woodruff to Caton. I particularly love that one limestone house holding on for dear life, alone and proud. There are two fairly big vacant lots with new projects going up, and one looks like this: 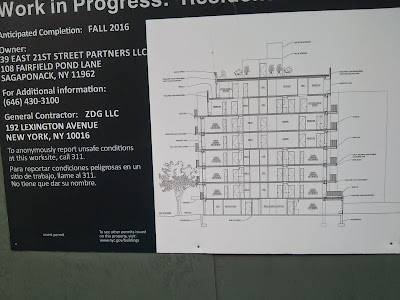 I'm no architect, but that seems like a whole lot of studios to me. The ones that say "kitchenette," that's like a dead giveaway yes? Or is this an SRO building? Methinks the former. The other site has no rendering, but appears to be developed by a company called Brookland. Here's a ton of projects they're working on all over the borough. Lots and lots of them are in Crown Heights and Bed-Stuy, so they clearly have Central Brooklyn on the brain in their wallet.

Those projects alone match all the new development the Q witnessed around here in his first dozen years. As I've mentioned many times, my home road of Clarkson is hosting a steady stream of new projects, many on my own block. I was particularly saddened to learn that this house next to the Haitian Pentecostal church known as Mount of Olives will be torn down by the end of summer: 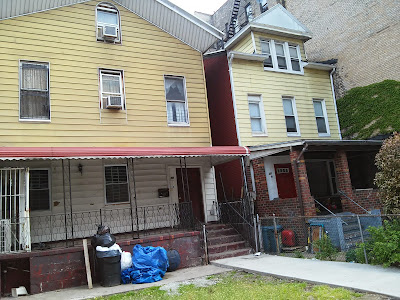 I remember being told when I first moved here that these two houses were "kind of sketchy." When you hear that word, always be skeptical. The house on the left is essentially the rectory for the church next door. And while they're not the best landscapers, they're about as sketchy as a hipster taking a painting class. Then the house on the right, the one that just sold, is home to an extended family of people so sweet and friendly hardly a day goes by I don't exchange pleasantries with them. They loved hanging on their porch. I learned yesterday that they're decamping for the south. That is, Ditmas Park. Don't cry for them, Argentina. The purchase price was probably well beyond their wildest dreams when they purchased the place decades ago for a song and a small pile of Susan B. Anthony's. But geez Louise I'll miss this little stretch. The brick town houses are apparently being bought too, amassing enough land to make a tear-down scenario likely. Would be a shame, since each is essentially a three family house right now. Three family house with 4-6 mailboxes that is.

*to those who haven't caught on, including the people who regularly email me that all the folks in these pictures are white, I'll let you in on a little secret. My talking about their weight is actually sarcasm, and yeah, I'm noting that they're white. But I don't really want to get into a whole thing about that, because it tends to get defensive and ugly. So shhhhh, don't tell anybody.

Posted by Clarkson FlatBed at 10:37 PM

I hear that two large wood frame houses on Linden near the corner of Bedford are next in line. Unlike many of the teardowns happening in Flatbush, these two are in great shape.

From my perch in Crown Heights, I used to look west at the new developments, then I looked east. Now, I look south.

As development moves thru PLG, you will eventually no longer look north, and start looking to the south.

FYI, something is going on at 169 Fenimore at the corner of Bedford. Big dumpster on Bedford that went from empty to filled to the brim in 24 hours after a demo crew went to town on the house. I spoke with the guys on the crew who told me that the house had been sold and the full renovation would be done in a month. Seems far fetched by they did have a lot of workers. Also, those two woodframe houses a half block down on bedford btwn Fenimore and Hawthorne have been cordoned off with plywood barriers and construction permits displayed. Much activity here!

And they'd better make it quick, before DOB busts them with a Stop Work Order for construction without a permit. Landmarks too. That'll be a fine mess.

But either way, no filings.

It reminds me of the photo I saw posted of the building going up on Sterling Street between Nostrand and New York Ave, right near the 2 station. The mock-up shows a pristine building with trees and lawn on both side. In reality, it's sandwiched between a park and another multi-unit building with no lawn AFAIK. So much for lawn darts, I guess.

Jessica, yes its the house on the corner with the crushed wrought iron fence and new chain link fence. I did not see any permits but hell if they can clean that place up a bit then I say Godspeed!

MaggieDoo - amen to that. It's landmarked so they can only do so much and I expect there's nothing left inside that's worth salvaging.

A contract of sale was filed a year ago on that house, but I guess now it's actually closed (although it hasn't hit public records yet). The buyer on the contract of sale was an LLC in Rego Park (Principal's name hard to make out - Albert Ganyeln or something like that), so at least not one of the usual suspects doing crappy flips a la that house on Maple that just sold for $1.425 million. I pity that buyer - supposedly they've already had a flooded basement.