This poster started showing up 'round hear, this one near the Sanitation Garage at Parkside and NY Avenue. Terrific graphics. Did it go up before the election? Eerie. 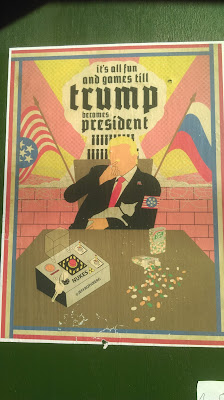 New York Avenue has turned into a new ground zero for slapdash market rate apartment buildings. Wouldn't have guessed it a dozen years ago. Tons of new construction. The building at Hawthorne is particularly loomy, and is going up breathtakingly fast. And how about the burned out soon-to-be-renovated building at  665 New York Avenue, where a terrible fire broke out four years ago? Lighting literally struck 100 or so families, and not the lucky kind. Some tenants have never given up on moving back in, though it's doubtful any will. Prices will have changed drastically, though there may be some recourse here if previous tenants are willing to engage the system. A broken, overburdened system to be sure. Some, as in the owners, might be more inclined to describe the lightning as the lucky kind. 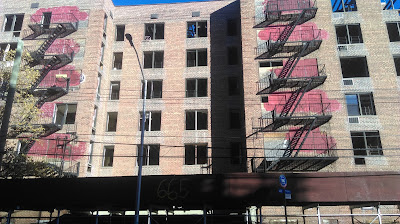 Sorry to see the above shoppe go. It was perhaps the most unique record store around, featuring a deep trove of Africa and Africa Diasporan music anywhere. Though truth be told the owner was downright mean when I first popped in a few years ago. As I started browsing his amazing collection of Islands music, he grunted "you buying? Saw you take a picture. Seems more like stealing." I engaged him in some terse tit-for-tat, then he calmed down when he realized I wasn't a journalist or art photographer. Seems people had been by at some point and used his sign in a book and didn't pay him anything. I browsed a bit, just to piss him off, then walked out tossing a "have a warm and fuzzy day" for kicks. I figured he was one of those guys from the black power generation that didn't much care for my presence. How simplistic and solipsistic was my read on the fellow! Let me explain...

Just yesterday I was talking to a helpful young African-American fellow who works at Kings County Nursery, under the gruff older guy, you know, the uncle-y guy who kinda scares you a little bit? Seems like he coulda been an extra on The Sopranos. I still can't tell if he's actually a sweetie...I should ask Joe. I mean he knows his stuff. But anyway, I'm not talking about him, I'm talking about the young fellow. When I pointed to the Disc Mart shoppe in question he says "oh yeah that old guy was mean, real mean. Nobody ever wanted to go in there. He chased me out once." And I thought it was just me, and/or about race. Turns out, he was a a bit of meanie. And the old guy from Kings County? Still don't know. But ask anyone - I don't scare easy, and, well, he kinda scares me. Poor little Miss Clarkson Flatbed, Jr. I think he reminded her of Burgermeister Meisterburger. She couldn't let go of my leg last time we went.

And dang if that hulk of a Hudson project at Nostrand and Clarkson ain't almost done. Remember that cute movie theater that used to was there? Hadn't been a movie theater in ages, but I always thought it could make a sweet community center or something. Shows how naive I was. Am. 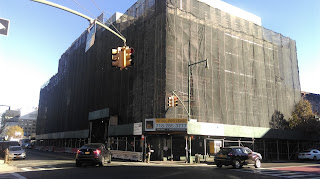 Lastly I just want to kvetch a bit about these damn buttons at crosswalks. Look at this one at Lincoln Road and Ocean. That light is interminable. But look at this button. "Department of Traffic." What the hell is that?  Something dreamed up by the Board of Estimate? And there's the sign that tells you push it, put there by the more contemporary Dept of Transportation, but you KNOW in your head that it does nothing to push it, you can't help but push it anyway, because you never know, you know? Then you push it again, for good measure, hoping nobody sees your act of quite desperation. Why don't they remove the sign? Or change the button? Or stop torturing us? If I were the Chair of Transportation at the Community Board well I oughta... 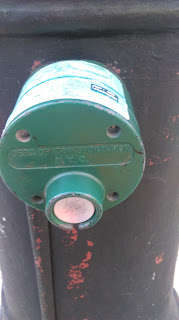 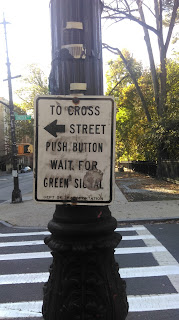 Posted by Clarkson FlatBed at 9:10 PM

It would appear you had an entirely different experience, Adrian. I wonder what it was that made him be so nasty to me? Hell I'd have been a frequent customer if my experience had been different. When the kid called him a "mean old man" it wasn't because I elicited it. Somewhere lies the truth, but my subjective reality stands.

Sorry, confused the African Record Center with Discmart. Discmart was a store largely specializing in literature and recordings about the Yoruba religion and Yoruba-influenced religions such as Voudun, Obeah and Candomble. The store is written up briefly in this 1996 Times article that also speaks about the proprietor's brother's African Record Center on Nostrand. http://mobile.nytimes.com/1996/08/29/arts/the-pop-life-079049.html The place had books and records you wouldn't find anywhere else.

Yes, Disc Mart guy was notoriously mean for as long as I can remember. African Record Center, the exact opposite. The guy at Kings County Nursery? Super nice once he knows you.

Another amen for African Record Center on the 'Strand. What a cool store. Tons of African LPs they'll let you listen to in the store, plus a big stack of vintage 45s.