TGITG. Thank God It's ThanksGiving, Y'all

So your life was getting a little dull, routine, predictable? Well have I got an election result for YOU!

Don't know about y'all, but I've been tooling around the political block a time or two, long enough to know we've seen some pretty "bad hombres" make their way into the upper echelons of American power. Haig, Schultz, Poindexter, Rumsfeld, Cheney. Though never a paranoid narcissist. Wait...wasn't that the diagnosis they gave Nixon? So there's your president precedent!

I can't stop thinking about what really won the election. Not the Neo-Nazis. Not the typical yahoos and rednecks. Not the bonafide racists, anti-semites and misogynists. No, those folks always voted Republican! It's those finicky contrarians, the ones who put Obama in the White House. Twice. Now Trump. And Bush. And Clinton and Reagan and Carter for chrisakes. And Nixon. And Ike. And Kennedy. And FDR. And...a pattern seems to be emerging here.

There is really only one part of the electorate that matters anymore. Swing voters in Swing States and those who need to be given a reason to vote at all. In swing states. It sucks. You spend all your spare time reading up on politics and history and none of it is worth a damn when you head to your Big City Polling Place to lodge your vote that's actually worth 1/2 a vote for a candidate that will likely be taking you for granted anyway. Plus, you get to stand in line for two hours, not because of restrictive voting laws but because of sheer incompetence.

But...it's still the greatest City in the world. You're the greatest neighbors anyone could have. Even Alicia Boyd makes me smile from time to time for her chutzpah and iron huevos. The kids are healthy, the wife is terrific. The house is warm and the food from the coop delicious and inexpensive. There's hot and cold running (get this) DRINKABLE water coming from the faucets. There's even potable water IN THE TOILET! The trash gets picked up three times a week from the curb. My parents are still living, in Tucson no less, a great place to go in the middle of winter. Quite honestly I could survive the rest of my life, comfortably, and never go more than two blocks from my house. That's how convenient and diverse is the Flabenue. I haven't had bedbugs in...at least three years. My band still plays a few shows a year. The internet is...amazing. Have you seen what it has on it? Lots and lots and lots of stuff. So much stuff. On the internet.

That's right folks. At the very least, be thankful for the internet. Have a blessed TG. You deserve it. And if you know someone who could use a nice hot meal, knock on their door and bring 'em to the Church of the Evangel on Saturday. No one should be alone for the holidays. Unless you have wi-fi. 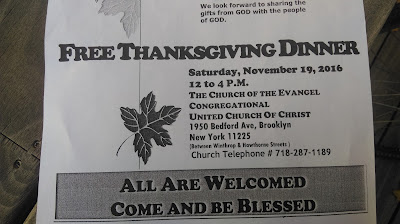 Posted by Clarkson FlatBed at 2:03 PM