The single least engaged, least effective Councilperson in all of NYC. Maybe ever? That's yours folks! Mathieu Eugene. Google him. Try to find his online presence, beyond old youtube videos with computerized voiceovers. If you're not aware of the extraordinary lameness of this do-nothing, you should really do your research. Then, consider the alternatives in the upcoming election.

The "democratic" election for President has come and gone. That means...time to gear up for the City elections for 2017. The Q has already noted the emergence of Brian Cunningham, who grew up not spittin' distance from the Q on Lenox, as a strong contender. Now we can add another soft-announced candidate - Pia Raymond - to the slate. She's the head of the Nostrand Avenue Merchant's Association, and a clear favorite of State Senator Jesse Hamilton, who was a clear favorite of BP Eric Adams. My point is that these folks don't just "appear" out of thin air. They're groomed, they put out their feelers, put in their time. Pia has led her "Creating Legacies" project, and already has about 1000% more goodwill and online presence going for her than the current Councilperson. Still, Cunningham has some deep connections too.

Given that both those candidates seem to be more known in the NE portion of Eugene's district, I'd put my money on a run by current Flatbush District Leader Josue Pierre as well. He's been positioning himself ever since Ed Powell gave up his District Leader JUST IN TIME for Pierre to step in and win it. Calculated, yes. He's more known in the 70th Precinct/CB14 area. It should be noted that all three of these possible candidates sport deep roots, a near necessity around here in order to drum up big support. And don't forget the churches! You can't win without the backing of the Christians around here. Try to make a heathen understand that and you get nowhere. It's like trying to explain why half the country is Pro-Life. Does not compute, does not compute.

The pictures tell the story. These three will be part of your politics for some time, the "next generation" if you will. With Laurie Cumbo, Diana Richardson, Rodneyse Bichotte, Walter Mosley, Jumaane Williams...there's a lot of talented African and Caribbean American candidates in House Flatbush. God knows the Nation needs all of them. And no funny business! 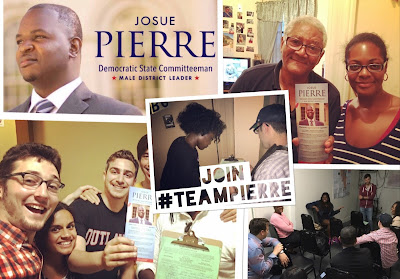 To date, the Q's noted the
Posted by Clarkson FlatBed at 2:57 PM

Is the title really "Male District Leader?" And is there a female?

Yes, that is the title and yes, there is a Female District Leader. I believe it's Shirley Patterson around these parts.

I have to assume Mathieu Eugene has left the city entirely. He's been nowhere to be seen. Had nothing to say after the West Indies parade tragedies. Did he march? Good luck to the most qualified and informed candidate! I hope women get in the race too. I'm so frustrated at how great the women candidates have been the last several years, and they couldn't beat Eugene. Is there a sexism problem with voters in this community? Wondering, seriously.